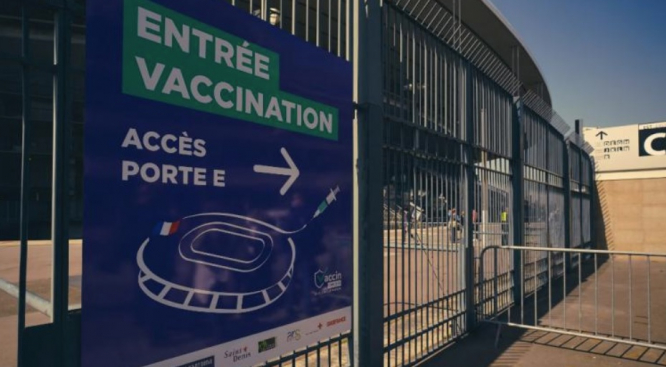 Vaccinations for over-55s begin today, amid a series of new vaccine rule changes in France
By Hannah Thompson

Vaccinations for all people aged 55 and over open in France today. The health minister this weekend also confirmed that there would now be a longer gap between the first and second jabs of the Pfizer and Moderna vaccines. We explain.

From today (Monday, April 12), vaccinations are open to all people aged 55 or over, whether or not they have existing health conditions or are considered at-risk.

It means vaccination for this age group is a month earlier than planned with doses previously scheduled to be available for people in the 50-64 age group with no extra medical risks from May 15.

The updated rollout schedule for over-55s is possible due to two vaccines; AstraZeneca, and Johnson & Johnson, new doses of which are now ready.

It comes as France has now vaccinated more than 10 million people with a first dose.

Are there any other changes?

The gap between injection doses of the Pfizer/BioNTech and Moderna jabs will now be 42 days instead of 28, as previously.

Health Minister Olivier Véran confirmed that France will begin to allow longer gaps between first and second injections for these two vaccines.

All the vaccines require two jabs to be effective except the Johnson & Johnson Janssen jab, which is single dose.

Mr Véran said: “From April 14, for the first injections [of these two vaccines], we will offer a callback at 42 days instead of the 28 currently. This will allow us to vaccinate more quickly, without reducing protection.”

Is it safe to extend the gap between vaccines?

Generally, the scientific consensus is yes.

This approach is similar to that taken in the UK, which on December 30, 2020, announced that it would extend the gap between vaccines from three weeks to 12, to enable it to give more people the first jab more quickly.

The first dose of the vaccines provide considerable protection against severe Covid-19, which is boosted after the second dose.

Read more: The effectiveness of the vaccines between first and second doses

Some scientific studies have even found that the effectiveness of the vaccine increases after a longer gap between doses; and that the protection offered from the first dose does not wane over the course of a three-month gap.

What about the reported issues with the AstraZeneca jab?

France is giving the AstraZeneca jab to over-55s only, after a possible link between the vaccine and very rare-but-serious blood clotting issues in younger people.

By March 22, 86 cases of thrombosis had been identified, out of a total of 25 million people in the European Economic Area (the EU, Iceland, Norway and Liechtenstein) who had received the Covid-19 vaccine.

People aged 55 or under, who have already received the first dose of the AstraZeneca vaccine, will now have the chance to receive a different vaccine - using mRNA technology - for their second dose, French health authorities have announced.

This will apply to the 533,000 people who had already received their first dose of the AstraZeneca before it was suspended in France (before being restarted again) and before a link was established between the jab and very rare instances of blood clotting issues in some patients.

What do we know about the Janssen jab?

Developed by US giant Johnson & Johnson, the jab has been authorised for use in France since March 12, but today marks the first time it has been used in the country, after “200,000 doses were delivered a week in advance”.

It uses the same “viral vector” technology as the AstraZeneca jab. It only requires one injection, and can be kept in a normal fridge for up to three months.

The Janssen vaccine provides 66-85%* effectiveness against symptomatic disease (again, depending on the age of the patient and other factors such as location, as data from different countries varies).

It has been shown to provide 85% effectiveness against severe forms of Covid, and 66% against mild to moderate forms.

What other vaccines are set to be available soon?

Mr Véran confirmed that the two other vaccines authorised for use in France - Pfizer/BioNTech and Moderna - will be available for use for all over-60s from April 16, in addition to the current stage of the campaign.

Self-testing Covid kits on sale in France: What you need to know
Covid France: Can I pick vaccine type by choosing where I get it?
Over 70 and struggling to get Covid jab in France? Try this number