Eight updates for train, ferry and plane travel to and from France 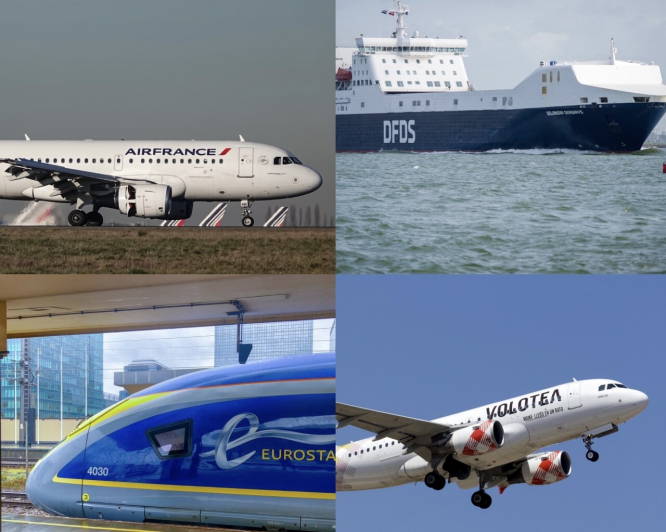 Travel is opening up: the US is preparing to open its borders to vaccinated travellers while Air France expands its winter offering to take advantage of Covid restriction relaxations.

We take a look at eight pieces of travel news for journeys to, from and around France this week.

UK Transport Secretary Grant Shapps has said that costly day two PCR tests should be replaced by a cheaper lateral flow option for vaccinated travellers to England by Friday, October 22, when schools break up for half-term.

“We want to get this done for half term for people,” he told Sky News.

“My colleagues over at health and to a certain extent the Home Office, they are the people who will have to implement this change, are working extremely hard on getting this done, and so we anticipate having it ready for the half term.

“What a difference it will make for people rather than having to do things like send off a test and wait for the result, people will be familiar with the lateral flow, you read it on the cassette there and then. It shows you the result in a few minutes.”

Mr Shapps added that an announcement on this change can be expected in the coming days.

Unvaccinated adults will still have to take PCR tests on days two and eight after arriving in England.

Announcement on US border opening due ‘very soon’

A White House spokesperson has said that a date for the reopening of US borders to vaccinated travellers will be revealed “very soon,” reports La Dépêche.

This will apply to America’s land borders with Canada and Mexico, but also to 33 other countries including France and the UK.

The end of the travel ban will allow fully vaccinated people to visit the country for non-essential reasons such as seeing family and friends. Travel for essential purposes such as work has been allowed throughout the pandemic.

However, from the beginning of January 2022, all travellers to the US will have to be fully vaccinated, no matter their reasons for entering the country.

Before it announces the official border reopening date, the US government is working to develop a contact tracing procedure and testing regime for people entering the country.

Read more: France-US travel: What is known about the plan for November reopening?

As Covid restrictions ease in many countries, Air France has announced a winter schedule of 182 short and long-haul destinations, complete with four new routes from Paris Charles de Gaulle.

Short-haul routes from Charles de Gaulle to Tenerife and Rovaniemi (Finland) and from Paris Orly to Berlin will also be introduced.

Air France will be resuming routes that have been closed since the beginning of the pandemic, including Fortaleza (Brazil), Cape Town (South Africa), Hong Kong and Seattle (US).

With the US expected to open its borders to vaccinated travellers in November – although the exact date has not yet been confirmed – the airline will also be increasing the number of cross-Atlantic flights it offers.

Finally, Air France will be extending certain summer routes into the winter season, which lasts until March 2022. These include Seville, Las Palmas, Palma de Mallorca, Faro and Krakov.

Read more: Five travel updates for journeys to, from and around France

Spanish low-cost airline Volotea will be offering a new route between Lille-Lesquin and Bordeaux from December.

There will be five flights a week – every day apart from Tuesdays and Saturdays – from December 17 to January 3, after which time an additional Tuesday flight will also be available until the beginning of April 2022.

Today, Minister @ThomasByrneTD is visiting Dunkirk for the inauguration of the 'Irish Terminal' - the base for the @DFDSGroup direct shipping route between Rosslare and Dunkirk.

A new ferry terminal has been inaugurated at Dunkirk, bringing the number of routes running between Ireland and France to 44.

The new terminal will accommodate a Rosslare to Dunkirk route operated by DFDS, which has three ships carrying out five round trips per week.

Irish European Affairs Minister Thomas Byrne told RTÉ’s News at One that: "It's basically sold out now with freight lorries. We only had 12 direct routes to France [per week] before Brexit, now it’s 44.

"We are looking as well next summer towards tourism to get Irish tourists into this region, but also of course, tourists from Northern France, Belgium, Holland and Germany.”

"I think there's a huge opportunity for tourism here as well and I think we're going to grasp those opportunities," Mr Byrne added.

Torben Carlsen, DFDS chief executive, told RTÉ that the route was added “in response to Brexit,” and to avoid the “paperwork and delays” caused by travel via the UK.

Air France will be discontinuing flights from Montpellier to Paris-Orly, which currently run six to eight times a day and constitute one half of all the air traffic leaving the airport, from November 8.

The flights will be replaced by six daily flights run by Air France’s subsidiary company, Transavia, and EasyJet. These airlines use larger planes than the 110-130-seaters which currently fly the route, and are more economical in terms of kerosene consumption.

Air France is leaving domestic routes subject to competition from TGV trains to low-cost operators, while it concentrates on more popular services such as Montpellier-Roissy.

Flights offered by Transavia and EasyJet will be 20-50% cheaper than their Air France-operated predecessors.

400 fines in two hours at Seine-Saint-Denis

Several times a year, SNCF carries out ticket inspections for several hours to catch some of the many people who travel without a valid ticket.

On October 8, 125 officials were stationed across La Plaine, Stade de France and L’Ile-Saint-Denis stations in Seine-Saint-Denis, watching out for passengers with invalid tickets or Navigo passes, as well as those jumping over the barriers.

The fines that SNCF handed out over the course of the morning totalled €12,748.

Each year, the rail company estimates that it loses €54million to passengers travelling illegally, the cost of five new trains.

About 9.2% of all travellers are believed to travel without a valid ticket.

Man thrown off Eurostar for wearing the wrong mask

A businessman travelling on a Eurostar train from Paris to London was ejected by police officers on Thursday (October 7) because he was not wearing “the right type of mask.”

Within minutes of departure from Gare du Nord, the train manager had entered into a heated argument with the man, according to The Independent.

The black mask that he was wearing was apparently not appropriate for travel, and so he eventually apologised and swapped to a blue surgical mask provided by another passenger.

However, when the train arrived in Lille it carried out an emergency stop so that three armed police officers could board, accompanied by others waiting on the platform.

“I've done nothing wrong and respect all coronavirus rules - this is absolutely outrageous,” the man said in a video recorded by another passenger.

He was then surrounded by around eight officers before being escorted from the train and left on the platform.

The Lille police officers confirmed that the man had been arrested, but that “we don’t know why, we’ll have to find out.”

Eurostar states on its website that “Passengers and staff must wear face masks at our stations and on board,” but it does not offer any further details of the types of mask which are accepted.

A spokesperson from Eurostar told The Connexion that: "Eurostar’s conditions of carriage clearly state that face masks must be worn for the entire journey within the stations and on board, and that failure to comply may result in refusal to travel.

"Unfortunately, a passenger on board a service from Paris to the UK on Thursday repeatedly removed his mask both in the station and on board, despite gentle reminders from staff. During the journey, the passenger became aggressive and intimidating towards the on-board team, when they politely reminded him to wear a mask as is required under our conditions of carriage.

"Eurostar teams have a responsibility to ensure the safety of all of those on board, and this kind of behaviour towards our staff cannot be tolerated. As a result, the passenger was asked to leave the train at Lille station and in this situation it is normal procedure for the police to attend and assist.”