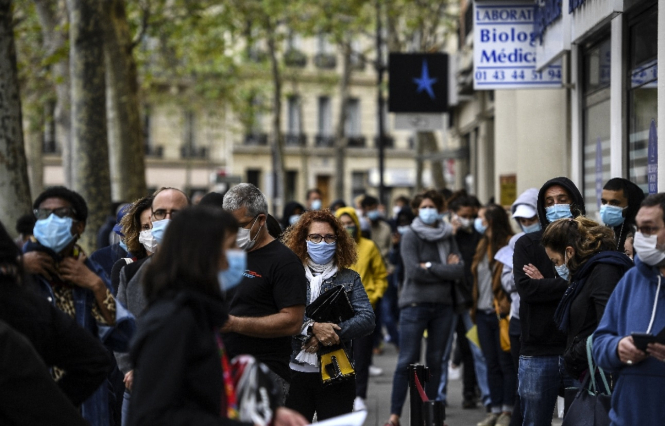 One laboratory centre saw queues of people around the block waiting for up to five hours on Saturday August 29, reported news service FranceInfo. In line with new testing rules, many town laboratories are offering Covid-19 walk-in tests for all, even those without a prescription, symptoms, or an appointment.

Waiting times of up to five hours were reported among “walk-ins”, but even those who try to book a test online may also need to wait 10 days or even two weeks before the earliest available appointment.

One woman waiting in Paris said: “I’ve been waiting now for three and half, almost four hours. It’s scandalous.”

Laboratories and testing centres across the country have been reporting similar delays, as the government continues its mass testing plan.

Health minister Olivier Véran said that the country is now doing 890,000 tests nationwide per week, and added that he would like to see the figure “rise in the short term to one million tests per week”.

He said: “We want to make tests available for everyone who needs or wants one.”

Read more: France targets 1 million Covid tests: What to do if positive

Despite mass testing having been recommended as a good strategy early on in the epidemic, some epidemiologists have criticised the rapid increase, and overloaded laboratories have called on the government to adopt a “more targeted” strategy.

Lionel Barrand, of biologist union le Syndicat National des Jeunes Biologistes, told FranceInfo: “What we need to do is target people who have symptoms, cases who have come into contact or who are at risk. There’s no point testing ‘Mrs Whoever’ down the street every week, when she has been at home the whole week.”

For its part, the government has said that it is continuing to consider the viability of new testing methods, such as saliva tests, which are faster and less invasive than the currently-used PCR nasal swab process.

Yet, the accuracy of saliva tests (known as RT-PCR) is currently estimated to be at 70%, which is not considered high enough to make them truly reliable.

This weekend (Sunday August 30) the government announced that it was awaiting conclusions from a series of new studies on the effectiveness of saliva tests before deciding whether or not to roll them out more widely.

One such test has been started in overseas territory French Guiana, at the hospital centre le Centre Hospitalier Andrée Rosemon in Cayenne.

Another study is set to begin “in the next few days” at the major Paris hospital group l’Assistance Publique-Hôpitaux de Paris (AP-HP).

Studies will focus primarily on the effectiveness of the “rapid” saliva test dubbed EasyCov, which has been developed by Montpellier lab Sys2Diag. In theory, this test can give a result with a small amount of saliva, and does not require the testee to visit a town or hospital lab.

Health authority la Direction Générale de Santé (DGS) said: “During mass testing, we must be able to quickly separate, and without too many errors, ill people from non-ill people. The test must have good sensitivity.

It continued: “If these tests show themselves to be sensitive, they may be used ‘on the ground’ for rapid testing in high-traffic areas, such as airports.”

People who have a positive saliva test and who are suspected to be ill will then be invited to take a more reliable test for confirmation, it said.

The test news comes as France announced 5,400 new Covid-19 cases in the previous 24 hours, in its most recent update (Sunday August 30).

Although the absolute number of new cases dropped, health agency Santé Publique France said that the “level of positivity” was continuing to rise; 4.1% over the past seven days, to 4% on Saturday, compared to 3.6% on Wednesday.

The number of local cluster outbreaks being investigated rose by 40 in the past 24 hours, to 346 overall.

Coronavirus: What do the latest updates mean for France?