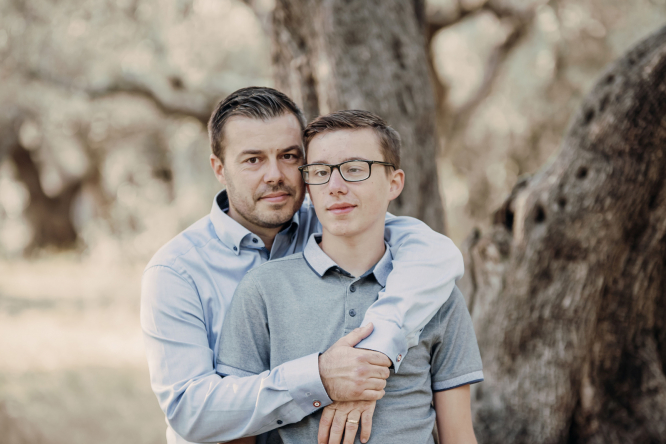 Xavier Baiao’s eldest son Nathanaël, then 15, was diagnosed in August 2020 with a diffuse brainstem glioma, a difficult-to-treat cancer deep in the brain. It mainly affects children aged four to 10.

When radiotherapy failed, the family paid thousands for a pill still under trial in the US.

Sadly, Nathanaël died in October, aged 16, but now the agency which assesses drug benefits and risks for France has been able to allow free access to it after teaming up with the family and a cancer hospital in a unique partnership. While not a cure, ONC201 can slow the disease’s advance.

In around 30% of patients, it has been shown to shrink the tumour.

The five-year survival rate is less than 10% and around half of patients survive only nine to 10 months after diagnosis.

Nathanaël’s cancer was already at stage four when he was diagnosed, and inoperable.

His family, from the Var, turned to Germany, where ONC201 was already available via a private doctor. However, just an online consultation to obtain a prescription cost €600.

“We were desperate and hoped the treatment would extend his life long enough for research to find a cure,” said Mr Baiao.

“But because we bought the pills abroad they were not reimbursed. A single capsule cost €272, and initially he needed three a week. Then the prescription increased to five a week and the monthly cost of €5,440 exceeded my salary.”

The family lobbied for ONC201 to be made available in France, and reimbursed.

“It’s incredibly stressful to have this financial pressure when you are already dealing with such a terrible diagnosis,” he said.

The French authorities had already been looking into making the drug accessible under a ‘compassionate’ protocol.

Compassionate access is where patient demand for an experimental drug leads, with support from doctors, to it being made available, before it receives marketing approval, to a patient or cohort thought likely to benefit.

The US laboratory had refused to sell the drug to them.

However, as it had not yet been licensed, it was not patented and the active molecule could be replicated, as had happened at a private clinic in Germany.

So, in an unusual step, the ANSM drug authority asked Mr Baiao to give it a capsule so it could analyse and reproduce it.

This led to a collaboration between him, the drug authority and the Paris cancer hospital Gustave Roussy.

Prof Gilles Vassal, of Gustave Roussy, said: “As there was the doctor in Germany making pills in his pharmacy, and patients like Mr Baiao paying from their own pockets and asking for a solution, we put in place a process to make the medicine.

“Then we made it available in medical centres around France, with a compassionate access protocol validated by ANSM, and succeeded in having it reimbursed.”

They carried out thorough quality checks to make sure they had the pure drug, he said.

“We’ve now put in place a process where we meet weekly among specialist doctors, who look at dossiers of new patients asking to be treated.

“We want to give access to those for whom other treatments have failed, to improve their quality of life and, for some of them, stabilise the illness or shrink their tumours.

“There is one case, particularly, of a child in France who went to the US to take part in trials, who has been doing well for two years and has been able to go back to a normal life.

“Some patients will live longer and have access to other medicines later on, though that is not the main aim.”

Just weeks after Nathanaël’s death, ONC201 was made available to cases where radiation, chemotherapy and surgery failed and the patient relapsed.

Mr Baiao, who works in construction and has three other sons, continues to fundraise.

'The association now aims to raise funds for research into this devastating childhood cancer and help other families.”

He has been contacted by a UK family wanting information. “I do not speak English but I might have to learn so I can talk to doctors from abroad,” he said.

“It’s always been possible in France for us to organise access for products thought to be innovative, with a potential gain for the patient’s hopes and strong demand from patients.”

However, she said the process this time, of obtaining the pill from Mr Baiao and replicating it, was unusual.