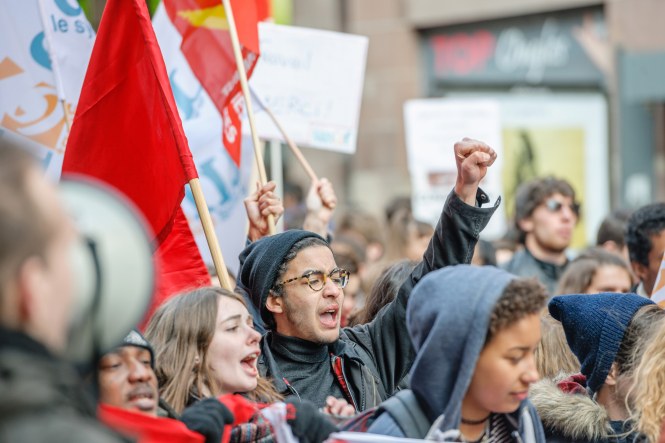 Thousands of people are expected to attend protests in Paris this afternoon Pic: Hadrian / Shutterstock

Strikes are planned today (October 5) across France, in protest at issues such as rising energy prices, changing rules for unemployment and retirement benefits, and reduced spending power.

Secretary of CGT, Céline Verzeletti, told Sud Ouest that jobs and salaries were among the most important issues, “there is growing anger and awareness that there is money, but that it is not being redistributed to working people”.

He said that the strikes should make sure that “social questions” were pushed to the front of the agenda, five months before the 2022 presidential elections are set to take place.

Some strikers are also protesting the Covid health pass, which the CGT described as a form of “liberticide”.

Ms Verzeletti said: “We will have 200 meeting points [for protestors], which is an initial sign that today will be positive for us.”

She said that despite the health crisis, “there is a return to union meetings and general gatherings”.

The CGT has published a map of where protests are planned, on its site.

In Paris, they will begin at place de la République at 14:00, moving towards Opéra, in the 9th arrondissement. Police said “many thousands of people are expected”.

In Bordeaux, protests will begin at 11:30 at place de la République.

SNCF has said that despite the strikes, transport on TGV, Thalys, Eurostar and Lyria trains will be “normal” and Intercité, Transilien and TER trains will be “near-normal” but with some “local changes”.

Postal deliveries could be disrupted today as workers from La Poste are called to strike.

Up to 25% of nursery school and primary school teachers are expected to join the strikes with possible disruption during school and extracurricular hours in some towns, including Nantes.

In such cases, a minimum staff service will be present, despite the relatively high numbers expected to join the protests, along with staff who manage school meals in primary schools and extracurricular clubs.

Extra services such as early morning and evening opening, and school meals, have been suspended in places including Villejuif (Val-de-Marne), Bezons (Val’d’Oise), and Cenon (Gironde).

In affected schools, parents must collect their children at lunchtime and straight after classes finish in the afternoon.

Parents in affected areas are advised to check with their school to see which measures are in place. Some teachers in collèges and lycées may also join strikes.

Seven money changes coming into effect in France in October