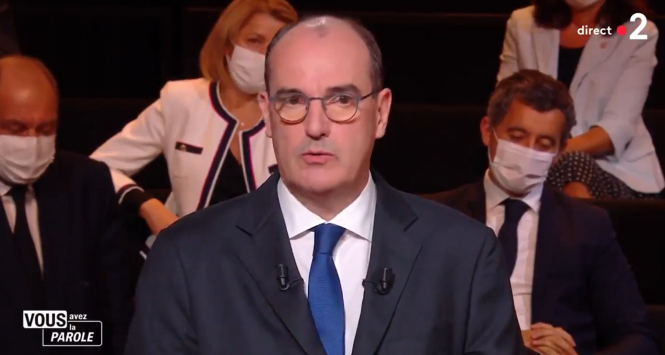 Prime Minister Jean Castex was speaking on television channel France2 and made a number of announcements about Covid-19.
By Hannah Thompson

Mr Castex was speaking on television channel France 2 last night (Thursday September 24), on the programme Vous Avez La Parole ("Your Turn To Speak"), and announced a series of measures and government commitments.

‘Not playing around with an epidemic’

He defended the strong measures being imposed nationwide, and said: “We are not playing around with an epidemic...we have decided to take stronger measures. It is a race against the clock to avoid situations that we saw last spring.”

He did not predict or rule out a second national lockdown, but said: “What I do not want, is a return to the month of March…[stronger measures] are about avoiding overwhelming our hospital establishments.”

He said: “If we do not act, we could find ourselves in a situation like that of last spring. That could mean reconfinement, and we must avoid it.”

Compensations for closed bars and restaurants in Marseille

Mr Castex announced that establishments that have been forced to close in the southern city would be compensated. He said: “We will compensate you for the losses you will suffer”, and reminded business owners that they could benefit from the “chômage partiel (partial unemployment)” system in the first instance.

He added: “We have decided to remove your social charges corresponding to the period when you will be closed”, and also said that there would be aid available “up to €10,000” during the same period.

The prime minister responded to the backlash against the stringent measures in the city - which some elected officials have said were abruptly decided without warning or consultation.

Mr Castex called on officials in Marseille to “take responsibility” and said that it was up to everyone “collectively” to be responsible during these times.

Read more: Anger in Marseille as bars and restaurants ordered to close

Mr Castex answered a question from representative of a grandparents’ association, Armelle Le Bigot-Macaux, president of l'association l'Ecole des grands-parents européens. She asked: “What is going on in the heads of politicians when they put us [over 65s] on the back burner?”

This was thought to be in reference to limits on grandparents being able to socialise and take care of grandchildren under widening restrictions.

Mr Castex replied: “I understand perfectly the role that grandparents play, and they are absolutely indispensable. My only objective is to protect you.”

Mr Castex announced that indoor pools would need to close in areas of “high and maximum alert” across the country. Outdoor pools can still remain open. This is in addition to the closure - already announced - of sports halls, gyms, festival halls, and multipurpose events halls.

Mr Castex admitted that he had not downloaded the government’s StopCovid app, which came out in June. Used correctly, it is intended to allow users to know if they have come within one metre contact - for longer than 15 minutes - with another user who has been confirmed to have Covid later.

Mr Castex confirmed that the “same rules” for any public events would apply to the famous tennis tournament taking place in Paris, including a limit of 1,000 people on-site, including spectators and participants.

It was thought that this would mean there would effectively be no in-person spectators for the event, as the 1,000-person limit would already be exceeded by the players, their entourage and the press.

But Mr Castex later specified to the Agence France-Presse that accredited people (such as organisers, players, staff and press) would be required to “follow a specific protocol” and would therefore not count towards the 1,000-person limit.

Mr Castex sought to reassure two employees from the Bridgestone factory in Béthune in Pas-de-Calais, after the Japanese tyre producer said that it wanted to close the site, which employs 863 people.

Mr Castex said: “It will be difficult. But we will do everything we possibly can. We will not let you fall.”

Mr Castex confirmed that the justice budget would increase by 8% in 2021, to increase public safety.

He confirmed the amount in response to a question from Patricia Perez, the mother of Adrien Perez, who was stabbed to death during a fight outside a nightclub in 2018.

Mr Castex said that this rise in budget would also be accompanied by “10,000 more police officers” during President Macron’s administration. There would also be more judges, whose mission would be to ensure that “so-called ‘smaller crimes’...would be effectively and properly punished”.

In the latest figures from Santé publique France (SPF), there were 16,096 new cases confirmed in the past 24 hours - a record number since the roll-out of mass testing across the country. The previous daily record was 13,000, on Tuesday (September 22).

There were 52 more deaths in hospitals in 24 hours. Over the past seven days, hospitals had 4,258 new admissions, of which 718 are in intensive care - a rise of 43 compared to the day before.

SPF warned that it had observed “an exponential rise in intensive care admissions” and a “rise in circulation of SARS-CoV-2 among the 65s and over”, and said that its data suggested that there had been “an underestimation of the number of confirmed cases” due to the “saturation of testing centre capacity”.