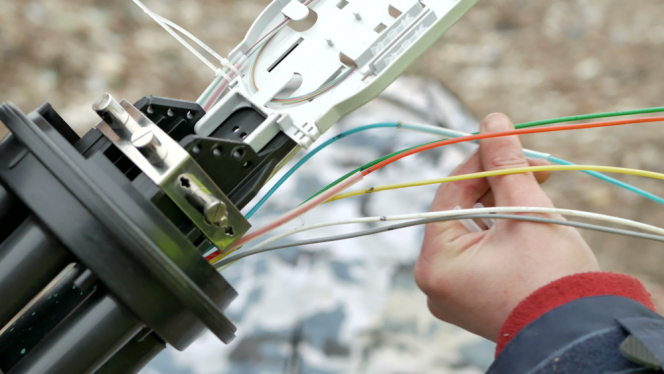 The rollout of fibre optic internet in France has been much faster in rural areas, figures show Pic: SHARKstock / Shutterstock

Rural areas in France have better access to fibre optic internet than many cities, and more than 60% of homes nationwide have access to coverage, a figure far above the European average, new figures suggest.

Fibre optic internet has been deployed across France much faster than ADSL broadband, with more than 60% of French people now having access to fibre, Le Figaro reported on October 7.

This is much higher than the European average, at 38%, and far higher than say, in Germany, where fibre optic coverage is at just 8%.

Low-density areas have better rollout than others

Small towns and “low-density” rural areas are also increasingly being equipped with fibre optics, at a faster rate than urban centres.

At the end of June, 27 million homes were eligible for fibre, and rural areas had more coverage than many urban centres, according to the French communications regulatory authority l’Autorité de Régulation des Communications Électroniques et des Postes (Arcep).

At an event on high-speed internet on October 6 and 7, Junior Minister for Digital Telecommunications, Cédric O, said: "Rural areas are leading the rollouts, which is excellent news for the development of the provinces.

His statement is backed up by figures from Arcep, whose latest report on the fixed broadband market for the second quarter of 2021 said that not only are major cities not the best-equipped with fibre optics, but that the roll-out of the technology was also proving slower in urban areas.

Internet offer comparison website ariase.com offers an online map for Internet users who want to know whether a commune is connected to optical fibre or not.

Click on the map below to see an interactive map of fibre coverage, and to search for your area.

Despite the fast rollout in some areas, many more densely populated zones are being “forgotten”, experts have said.

Ariel Turpin, head of Avicca, said: "The deployment of fibre in the highly-populated zones has been stalling for years and is in free fall in ‘medium-dense’ areas.”

The government could even hand out sanctions to two operators, Orange and SFR, who it suspects of not fulfilling their contract promises.

Orange was supposed to cover 100% of medium-density areas with fibre optics before next year, and SFR is contracted to provide 92% coverage in its areas, but this is still a long way off, figures show.

Orange has defended its rollout, saying that it is only "a few hundred thousand outlets short, compared to the more than six million [that were] deployed during the Covid period".

Some areas in large cities are still likely to be fibre optic ‘blackout’ zones, such as some areas of Lille and Nantes, as the operators have not made any commitment there.

The government may yet intervene with Orange, as it is a shareholder.

As for 5G, its rollout is accelerating.

Free Mobile has deployed the most 5G sites of all networks in the last quarter, according to an October 8 report by 01net.com.

Arcep shows that 664 more Free Mobile 5G sites went online in that time. The other networks, Bouygues Telecom, Orange and SFR, have installed far fewer: at 290, 219, and 231 respectively.

Arcep has an interactive tool that the public can consult, to check the 3G, 4G, and 5G coverage in their area.

The introduction of 5G has proven controversial for some in France, with a 2020 study having found that the technology could cause harm to the environment; and two Catholic monks recently having been arrested for setting fire to antennas near Lyon.

Where can I complain about slow internet speed in France?
Leasing deals take some of sting out of smartphone costs in France
Orange launches commitment-free French mobile contracts