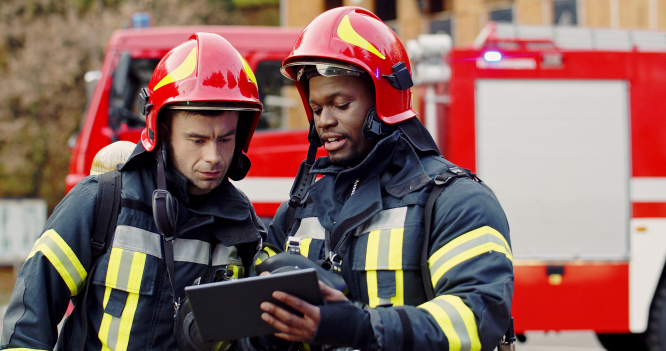 Firefighters may come to your door selling official calendars from November onwards in France, but there are some things to watch out for to avoid falling victim to a scam Pic: VAKS-Stock Agency / Shutterstock

Gendarmes and firefighters in France have warned of a new scam involving calendars being sold door-to-door for Christmas.

In France, workers including firefighters, police, and council staff such as refuse collectors traditionally go door-to-door to local people’s houses, selling calendars in exchange for a donation of your choice.

Le Monde reports that people usually give around €8-10. The money traditionally goes towards giving the workers a ‘13th month’ salary boost, as well as helping to pay for Christmas family activities, or even to help support the families of workers who may have died in service.

However, firefighters across the country have warned of scammers, sometimes dressed in actual firefighter gear, visiting people’s homes to sell calendars that will never arrive.

They might show an example of a calendar, take your money, and promise that your copy will be sent soon. But this is a scam.

The sapeurs-pompiers of Cintegabelle, in the Haute-Garonne department, posted on their Facebook page to remind everyone that real firefighters will have a professional card to prove their identity, and that anyone answering the door should ask them to show it.

Pompiers in the Lot department also said they were aware of people impersonating them to run scams, especially in Cahors.

The gendarmerie of Haute-Garonne reminded people of who can and cannot sell calendars, and how they would do so, in a bid to help people avoid scams.

Firefighters are the only group that are ‘officially’ allowed to sell their calendars; the other professions are tolerated – but other kinds of workers are not allowed.

Some cities such as Paris, Nice, and Lyon do not allow waste collectors to ask for money – mainly because they are easier to impersonate – and local councils will sometimes have specific rules, so if in doubt, it is worth checking with your local Mairie.

The gendarmerie also said that the calendar itself will have some clues as to whether it is genuine or not.

It said: “When selling calendars, the official logo (fire brigade, the commune etc.) of the institution must appear on the item sold, and very often there will also be a photo (or several) of the team. If the logo is not there, it is a fake.”

They also warned people to be alert to anyone selling in pairs, as sometimes this leads to one person distracting the homeowner, while the other commits theft.

The gendarmerie warned people to never let anyone enter their home unexpectedly, even if they appear to be a firefighter or council agent.

In case of any doubt, or the worker becoming rude or abusive, they advised people not to pay any money, and to call 17.