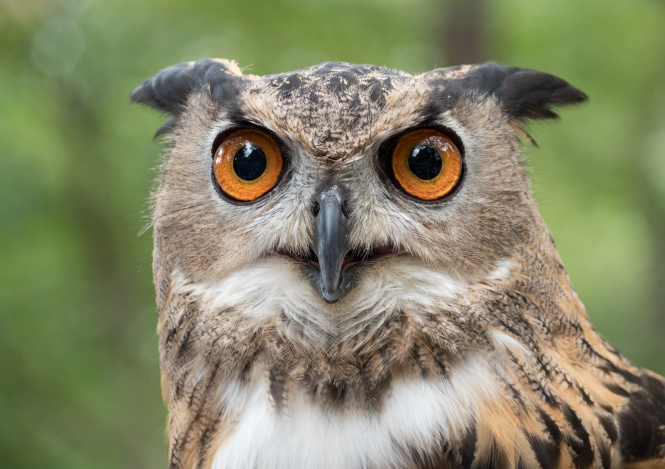 Eurasian eagle-owls can be up to 80cm tall and have a wingspan of up to 1.8 metres
By Thomas Brent

The bird, which has been hanging around the village, Eze, since June, struck last week, leaving dog owner Christian Tesson devastated.

“It was 19:45. My small 15-month-old dog was waiting for my wife at the gate [in the garden]. When I turned on the light I couldn’t see Jade. I saw a huge brown creature - at first I thought it was a wild boar - which flew away, revealing an abominable scene,” Mr Tesson told local paper Nice Matin.

“Our young dog was covered in blood with a big wound to the neck. She was dead, torn to pieces by a huge bird. It came back five times to try to take her away. I shouted. I scared it away with a broom but there was nothing more I could do. I saw its big yellow eyes staring at me. It wasn't afraid of me and it was less than a metre away.”

Mr Tesson and his wife have since contacted the police, the mairie and animal rights group the Ligue pour la Protection des Oiseaux (LPO).

Eurasian eagle-owls are birds of prey and are commonly found in the south of France. They can be up to 80cm tall with a wingspan of 1.3 to 1.8 metres.

François Grimal, president of the Provence-Alpes-Côte d’Azur branch of the LPO, said this was not normal behaviour for the species of owl.

“Normally it is a discreet animal, except that it sings. They nest in cliffs and hunt during the night so people don’t really see them,” Mr Grimal told The Connexion.

“For this bird to kill a pet is very rare, we have never observed this before. That doesn’t mean it has not happened before, but it is unusual.

“It’s not just the fact that the bird killed a dog that is panicking people, but its behavior in general. It doesn’t appear to be afraid of people and it is hanging around in the same area of Eze,” he said.

Mr Grimal said he thinks that the bird has probably been living with humans in the past, which would explain why it does not appear to be afraid of them.

“Often when animals have lived with human contact, when they escape they have a dangerous behaviour. That is to say, they are used to being with humans and look for further interactions with humans,” he said.

Mr Grimal said that state services dedicated to capturing wild animals may intervene and capture the bird, but they were currently assessing the situation.

Eurasian eagle-owls are a protected species in France meaning that intervening is difficult.

“State services need to ensure that they will not endanger the animal if deciding to capture it,” Mr Grimal said.

He added that if the bird posed a threat to public security then services will intervene immediately.

Mr Grimal said that people living in Eze have been notified of the problem. If they are worried about their pets they should keep them inside, especially around dusk, while authorities assess the situation.

He said people elsewhere in the region do not need to worry about the bird.

He hopes the situation will be resolved within a week so that people did not have to worry for “months on end”. He said he did not know if the bird would strike again.

“Either this is a one-off situation or it will continue to attack, I can’t say. What is sure is that if it is not afraid of humans at the moment this will not change.”

Read more about animals in France:

Is it legal for neighbour to keep 16 dogs in French garden?