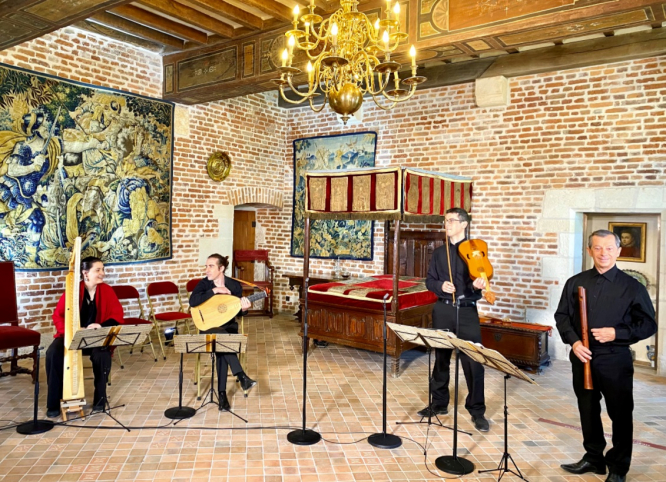 The musicians were recording a new concert with old instruments at Da Vinci's former home, for a US festival Pic: Château du Clos Lucé / @closluce / Twitter

A musical instrument enjoyed and played by Leonardo da Vinci has been brought back to life at his one-time home in France, the Château du Clos Lucé, by a band specialising in historical music.

The four-piece band, named Doulce Mémoire, played a concert at the chateau in Amboise, Indre-et-Loire. The house was home to the Italian polymath during the Renaissance.

The instruments used include the “arm lyre”, an example of which was played by da Vinci himself.

Baptiste Romain, one of the musicians in Doulce Mémoire, told FranceInfo: "This instrument is the lyre, which is a bowed string instrument, a bit like the violin.

“It was the most popular instrument to accompany singing during the Renaissance. It is also the instrument that Leonardo da Vinci played and that he probably brought with him from Italy to play at Clos Lucé.”

It was the group’s first “in-person” concert for a year, after the restrictions of the Covid-19 pandemic.

Denis Raison, artistic director of the band, said: “It feels good to simply practice our art. It's always extremely moving when you can play with others and hear the sounds come alive. It's a very strong emotion.”

The band recorded the set, which included the playing of the lyre, for a festival of old music scheduled to take place in Boston, US, on June 7.

The video will be played at the festival, with the backdrop of da Vinci’s one-time home itself expected to add extra context and meaning to the performance.

Diane Junqua, communication director at Clos Lucé, said: “The US is a country that is particularly dear to us. Americans are our most numerous foreign visitors.”