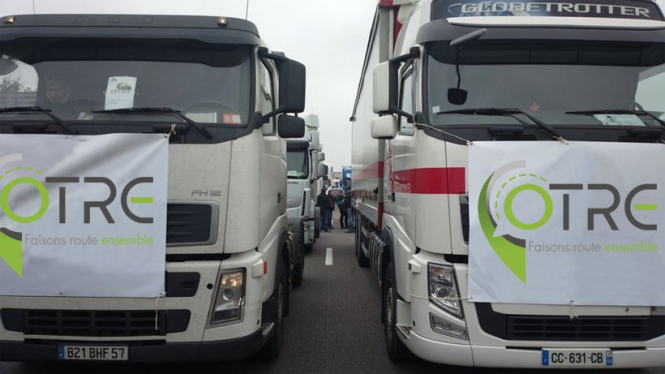 There are set to be 15 blockades across 11 regions in the country, on Saturday December 7.

The movement will take the form of blockades into refuelling depots, or “snail operations”, in which vehicles will drive extremely slowly to deliberately cause traffic jams and delays on the roads.

The action is being led by the third-largest sector association OTRE (L’Organisation des Transporteurs Routiers Européens), but has not been supported by the two largest sector groups, FNTR and TLF.

The main blockade locations can be seen in a map distributed by OTRE. Major affected areas will include the outskirts of Toulouse, and the A8 motorway from Italy into France, near Aix-en-Provence (Bouches-du-Rhône).

Normal cars will be let through by the lorry drivers and blockaders, but delays and traffic jams are still expected.

Jean-Marc Rivéra, general delegate for OTRE, said: “We have gathered around 1,000 [lorry] vehicles in total. We will be far enough away from urban centres, to spare normal citizens who work during the week. The places chosen are near border areas, or on roads that are often used by foreign lorries.”

The protests come as the government plans to drop by two cents per litre the amount companies will be able to claim back in taxes on fuel in 2020. This money will raise €140 million per year, the government says, which will go towards improving transport infrastructure.

Yet, while the proposals were approved by the Assemblée Nationale on October 17, the bill was effectively thrown out by the Senate. A cross-party commission is expected to meet on December 12 to come to an agreement on the bill.

Industry organisations claim that the sector is already too-highly taxed, and say they are “tired of feeling undefended and unheard”.

They argue that higher taxes on fuel will disproportionately affect French lorry drivers in comparison to foreign lorry and transport companies, which pass through France and use its infrastructure, but are not asked to contribute towards its upkeep.
The associations are therefore asking that an “eco tax” be put in place that would be paid for by the goods companies themselves, and would not “penalise” the transporters.
An OTRE statement said: “The sector already contributes significantly to the financing of infrastructure (more than seven billion per year), and it is not only French transporters that use the French road network, but also the huge influx of foreign transporters.”

But the government claims that transport companies will already be able to pass the extra costs of the two-cent drop onto their customers, and will not be disproportionately affected by the proposed change.

Elisabeth Borne - now ecology minister and former transport minister, who first announced the measure in the summer of this year - told the Agence France-Presse: “We are working very hard to not put transport companies in difficulty; that is obviously not the goal. We have had a great many discussions.

“Really, we have been sure to give them all the guarantees, on all the other issues that they had brought to our attention. The idea is not that these two centimes weigh heavily on road transport businesses. There is everything they need in the current law to allow them to pass on [this cost] to their clients.”