Macron: Nuclear energy is the future for eco-friendly France 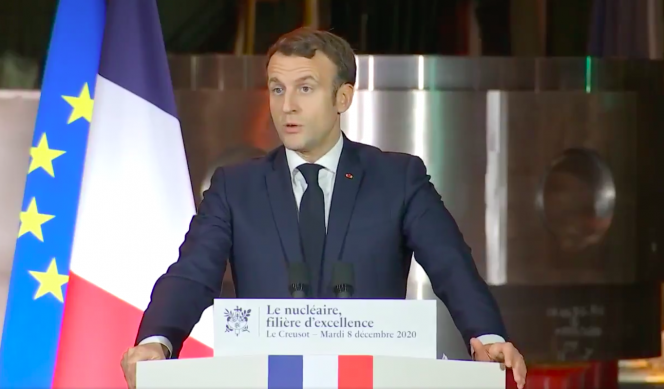 President Macron has said he sees nuclear energy as a solution for an eco-friendly future in France, while visiting the Framatome nuclear reactor factory in Saône-et-Loire, yesterday (December 8).

In a speech at the factory, the President said: “Our future in terms of ecology and energy will be through nuclear energy.

He added: “As we have made progress on nuclear waste and safety, nuclear energy is a decarbonated, safe energy [that should] remain a cornerstone of our energy mix [in France].”

France currently derives around 75% of its energy from nuclear sources and has planned to reduce this to 50% by 2035. The president said reducing the country’s reliance on nuclear power any faster would be an ecological mistake. “Renouncing nuclear energy completely, too quickly, would mean opening coal or gas centres or importing carbon energy, as other countries have done,” he said.

While acknowledging that renewable energy production must “increase strongly”, President Macron spoke about the comparable benefits of nuclear energy. Citing findings from government research group GIEC, he said that although many people believe that nuclear energy “pollutes the air and emits greenhouse gasses” it actually produces less CO2 than other non-renewable sources.

New eco-laws to be implemented

This comes as the government announced which measures it will implement from the Citizens' Convention on climate earlier this week.

This was an assembly of 150 French citizens selected at random to define a series of measures to reduce greenhouse emissions in France. The convention held multiple assemblies in 2020 in order to learn about different aspects of greenhouse gas emissions, debate issues and draft new laws.

In June 2020, they voted in favour of 149 proposals which were then submitted to the government. While vetoing two suggestions, the government said it would seriously consider implementing the rest, with the aim of “reducing greenhouse gas emissions by 40% by 2030”.

Now, the government has presented the outline of a new set of climate laws, which show they plan to take on around 40% of the convention’s suggestions.

Other suggestions have been rejected, toned down, or integrated into other laws, to the disappointment of members of the convention. Member Eric told news source FranceInfo: “Many things have been modified. They have been taken on with much longer deadlines, or in a less ambitious way.”

Here are the measures the government have announced:

A ban on renting very poorly insulated buildings known as passoires thermiques (or “thermal sieves”) will be implemented by 2028. The Convention wanted to include residences with F and G thermal rating (with an A rating being the best). The government has not confirmed which buildings will be included.

New vehicles that produce a very high amount of emissions will not be permitted. The convention wanted to ban the sale of new vehicles that emit 110g of CO2 by 2025, then lower the limit to 95g by 2030. The government has agreed the 2025 date, but have not yet fixed a limit for emissions.

The government has rejected the convention's suggestion to tax air travel tickets, hoping instead for a Europe-wide solution. It has also rejected plans to close national air travel routes where train journeys under four hours are available, and said it will allow some exceptions to a ban on airport expansions.

Prices for train journeys will be reduced and car parking facilities near public transport stations will be increased.

The government has essentially rejected a proposal to ban advertising on products that have a large carbon footprint. The only ban will be on adverts for fossil fuels, but adverts for vehicles are still allowed.

A proposition to reduce adverts in public places has not been rejected but is unclear what form the measure may take. The convention proposed using advertising space for local and cultural information, instead of to encourage shopping – a decision the government has said it will leave up to local mayors.

But publicity aircraft will be banned, and another proposal to encourage the use of glass packaging will be implemented.

The government has refused measures to reduce sticky labels on food packaging on the grounds that many “encourage” ecological consumption. The convention proposed a ban on pesticides that would see their use gradually reduced to zero by 2040, which has also been rejected. And a proposal to introduce a tax on nitrogen fertilisers has also been pushed back to 2024. The convention suggested the proceeds from the tax could be reinvested to support ecological agriculture.

But the government accepted plans to introduce vegetarian options in cafeterias (in workplaces, for example) by 2022. Cafeterias will begin testing the scheme on a voluntary basis from 2021.

The government announced no new measures in relation to plastic, even though the convention suggested obligatory recycling and a ban on single-use plastics by 2023.

It also refused a change to a law on replacement parts that makes them available for five years after a product is put on sale. The convention wanted to increase this to 15 years to make repairing old products easier, but the government only agreed to “complete the list” of products to which the existing law applies.

But three suggestions have been approved: the reinforcement of environmental measures in new commercial markets, the environmental role of corporate social responsibility teams in companies, and the implementation of regional energy objectives.

Environmental news in France this December