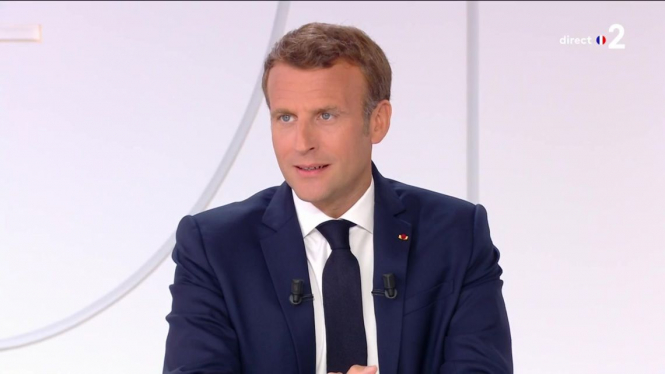 Today was the first time since the beginning of Mr Macron’s term in office that he has agreed to do the live interview traditionally organised by his predecessors on July 14.

He was questioned by journalists Léa Salamé (France Inter and France 2) and Gilles Bouleau (TF1 and LCI), with one of his most important announcements being his wish for it to become mandatory for masks to be worn in all enclosed public spaces, starting from August 1.

“I recommend that all our fellow citizens wear masks as much as possible when they are outdoors, and even more so when they are in an enclosed area. We are going to put ourselves in a position where, for example, from August 1, we can make it totally compulsory [in these closed public places],” Mr Macron said.

The president remained generally positive about France’s handling of the Covid-19 pandemic, stating that the whole country "mobilised with good results".

“We managed to stem the tide and return to an almost-normal life. This is not the case in other countries,” Mr Macron said.

However he said there were some signs that the virus was "starting up again a bit", and so said care was needed.

If new confinement measures were needed, it would just be locally in certain areas, he predicted.

President Macron ruled out tax increases as a way of facing up to increased public expenditure due to the health crisis.

He admitted that there would be an increase in unemployment due to the pandemic, predicting over 900,000 more people would be without work by the end of the year.

To combat this, he referred to the new activité réduite pour le maintien en emploi (ARME) scheme which involves people in certain hard-hit sectors being able to work fewer hours for up to two years while remaining employed and still obtaining 84% of net salary for the time they are temporarily unemployed (with compensation for the employer from the state).

To help young, out-of-work people, Mr Macron stated that the government would create 300,000 new placement contracts that would provide positions for the young who were “the farthest from employment”.

The government is also going to set up a special social charge exemption scheme scheme for young people, intended in particular to encourage the recruitment of low-skilled workers. The scheme is designed to make young people the “priority”, and will last one to two years before being re-evaluated.

He said this would be a key part of a 'economic relaunch plan' which he said would amount to a total of €100 billion.

The president told the two journalists that going forward he would not try to recreate yesterday’s approach to industry, but that “France can become a great industrial nation again thanks to ecology”.

“France is not going to import materials from the other side of the world. We are going to produce again in our regions because digital technology will also allow us to produce smaller quantities faster thanks to 3D printing,” said Mr Macron. He also promised to help small, medium and large industries switch to environmentally friendly models.

Mr Macron said he supported putting the fight against climate change into the French Constitution "as soon as possible" and announced that there would be a major programme of renovation for energy saving in schools and retirement homes.

The president was asked about why there have been so many protests since he took office in 2017. Mr Macron did not deny this, telling the journalists that it was not for him to judge whether his critics were right or not, but what was not acceptable was “hatred”.

“I have without doubt made mistakes that have prevented me from bringing together the French people,” he said.

“We have not produced enough results because we have not been quick enough.”

The interview ended with the president being questioned on instances of racism within the police.

Mr Macron said that the topic had to be looked into, and said that before his term comes to an end, police will be wearing cameras in order to re-establish trust between the citizens and the police.