Macron to confirm reopening dates for France this Friday 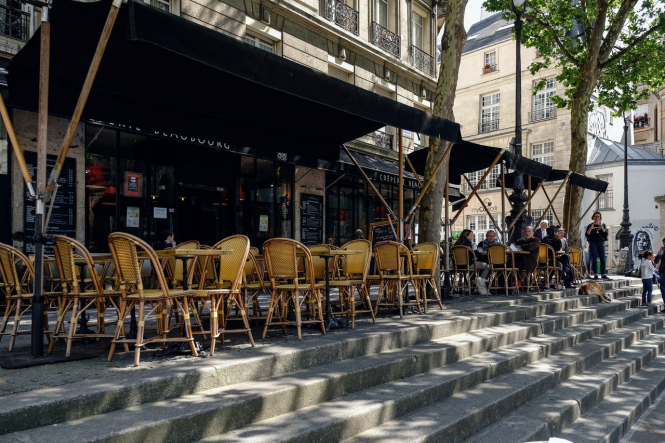 Outdoor restaurant terrace areas will be among the first places to reopen as part of the timeline, Mr Macron is expected to announce Pic: Anna Shvets / Pexels / Pexels License

President Emmanuel Macron is set to speak this coming Friday, April 30, to officially confirm plans to end the Covid lockdown gradually in France, with restrictions expected to ease from May 12 onwards.

It is thought that Mr Macron will be interviewed on the subject, rather than making a solo speech as he has previously done on Covid restrictions.

The president will also ensure that by the middle of next week, local mayors will have key dates in the calendar for ending lockdown in their areas between May and July.

It is thought that the first change to the lockdown measures will start around May 12.

Mr Macron this week said that the curfew would stay in place but could be relaxed and begin later than the current time of 19:00, especially after restaurant terraces start to open.

He said this week: “For the curfew, we must hold on until mid-May.”

The president has also said that he is in favour of a “health pass” that would allow people to prove they are Covid-free or have been fully vaccinated.

But he said he could only see this being required for large events such as festivals, and not for everyday outings such as going to a restaurant.

He said: “We must not stop people from living.”

Read more: France Covid health pass: What is it and how would it work?

Confirmation of an announcement on Friday (April 30) comes after the president said on April 26 that the country would “open in stages”.

The current confinement travel measures will end on May 3. So far, it is thought that this will be followed by the opening of restaurant terraces and some cultural sites from May 12.

The third stage will be “around the beginning of June”, Mr Macron said, when interior restaurants could reopen in less-affected areas.

The fourth stage will be “mid-to-late June”, and could include indoor spaces such as sports halls.

Read more: Macron: France Covid lockdown will end ‘in stages’ from May 3

Mr Macron has suggested that an end to lockdown measures are set to vary from area to area, depending on the local health situation.

It comes as the Brazilian and South African variants of Covid-19 are seeing a “worrying evolution” in the Ile-de-France region, one senior doctor has said.

Professor Rémi Salomon, president of the medical commission at hospital group l’APHP shared data on Twitter showing a rise in the variants in the region.

He said: “We must wait for the [DNA] sequencing to distinguish these two variants, the contagion of which we still do not know much about, compared to the British [variant]. But the P1 [Brazilian] seems to be more contagious. The Indian [variant] has not yet been detected.”

The latest data from health authority Santé publique France show that between April 11-22, the proportion of tests suspected of showing a positive result for the Brazilian and South African variants had doubled from 4.5% to 9%.

Yet, Professor Salomon said that this rise could be linked to the “Indian variant, or to the presence of this mutation on other variants (such as the UK variant or others). We await the [DNA] sequencing”.

The variant figures come from PCR tests that are screened for the possible presence of variants, not all PCR tests done overall. In Ile-de-France, 38% of tests are currently being screened.

This screening aims to “test patients that are carriers of a defined variant” such as the Brazilian, UK or South African strains.

DNA sequencing “aims to create genetic surveillance of viruses spreading across the national territory” and to identify any potential new variants.

Ile-de-France so far appears to be the only region in France that is seeing a rise in the Brazilian and South African variants.

Across the rest of the country, however, the percentage of screened PCR tests showing positive results for the variants rose from 3.8% to 4.8% from April 11-22.

Professor Eric Caumes, head of infectious diseases at the Pitié-Salpêtrière hospital in Paris, has also described the rise in variants as “worrying”.

He said: “It has risen over the past few weeks. We are worried because these are the variants that may get past naturally-acquired immunity or certain vaccines.”

Macron: France Covid lockdown will end ‘in stages’ from May 3
France deconfinement: Dates for reopening restaurants, museums, shops
Where in France are restaurants expected to open first?
CONFIRMED: End of lockdown in France set for May 3

7 hours ago
3
Britons in France: Five groups 'at risk' of missing card deadline