The French mayor against climate change and for life quality 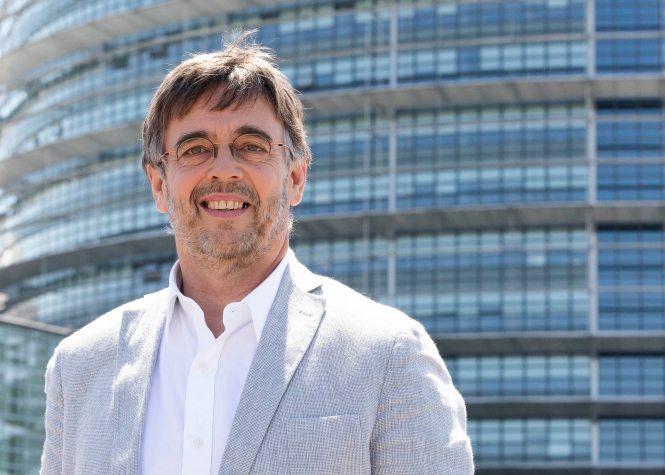 I think 70% of the [environmental] fight must be at local level. Councils have a role to play in housing, public transport, energy and food. At Grande-Synthe, measures we introduced include serving 100% organic and local food in school canteens and helping market gardeners set up in the town.

We worked to provide low-energy housing and would only give contracts to landlords who followed the high environmental standards we set. We encouraged people to walk more by planting trees to make roads more pleasant and introduced cycle lanes and bike parks – 30% of children now go to school by bicycle.

Public transport is free and high-performance – 83% of the population live less than 300 metres from a bus stop and buses pass every 10-15 minutes. If you do not have an efficient service, people will not use the bus. Electricity in the town’s buildings, such as sports halls and the mairie, is 100% renewable. We have a network of renewable gas taken from recuperating energy from big industries around the town and, by 2021, 100% of the town’s buildings, the hospitals and social housing will use this form of heating. That is 5,600 tonnes less CO2 in the atmosphere.

It is a false argument to say that environmental policies cost more. We have organised meeting areas where people can share tools, materials and skills to avoid making unnecessary purchases and that does not cost the inhabitant one centime. Serving organic food in schools is not more expensive – in fact, you can reduce costs. We saved money by cutting back on lighting in the town to improve biodiversity. We reduced the number of lights, switched to LEDs, turned off 50% after midnight and 75% after 02.00. Our electricity bill is €500,000 cheaper and we give that money to residents living under the poverty line. Measures to improve the environment improve people’s lives.

Health is better because people eat organic food. We make our own cleaning products to avoid the endocrine disruptors used in many commercial products. Another example is the shared gardens for blocks of flats where people not only produce their own food, but also create social links with neighbours they might otherwise not talk to. We take care of people and we take care of the planet.

This French animal sanctuary is in urgent need of donations - can you help?

There is a phrase I like in politics: showing an example is not the best way to convince others, it is the only way. For 18 years, I showed what is possible. I was invited to many debates in local councils during the run-up to the local elections and I can see that more and more people are interested in making changes.

In this year’s local elections, many big towns and cities, including Tours, Poitiers, Bordeaux, Besançon, Strasbourg, Marseille and Lyon elected a green mayor. It is true there are around 35,000 communes and the majority are not “green”, but I think the experiences from the big towns will filter down.

Patience is a virtue

It will take time. The next elections will show a bigger change because Covid is making people realise we cannot continue with the way we live now. The state has a massive role to play too because it controls agricultural policy, housing and transport networks. Governments have not adhered to many of the charters, including the 2015 Paris Climate Change Agreement.

I am the mayor who took the government to court at the end of 2018 over its failure to act against climate change, and we should have the results from the Conseil d’Etat by the end of the year. When I travel round France, I am struck by the number of people who tell me they are frightened of the water they drink, the food they eat and the air they breathe, because it is likely to be polluted.

We are the country which consumes the highest level of antidepressants. Such high anxiety shows our society is in a bad way. But we can save the environment, take care of our health, live better and no longer be frightened of what we eat, drink or breathe. The role of the citizen is to recognise the problem and fight for change, and then accept a certain number of changes themselves – for example, to use more public transport and consume less. I am confident people have the intelligence to change and, after that, we will all be much happier than we are today.