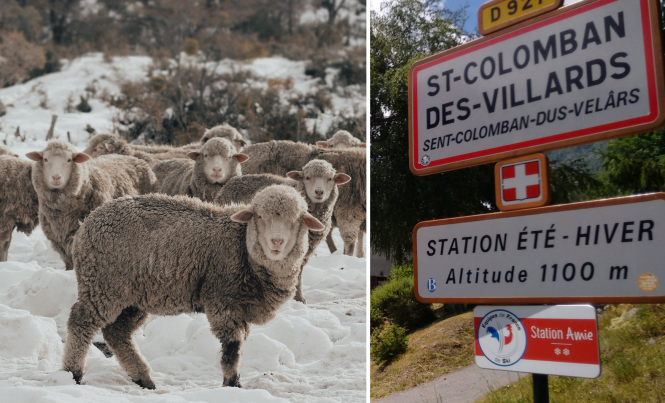 The animals became stuck up the mountain near Saint-Colomban-des-Villards after heavier-than-expected snowfall. (Photo for illustration only.)
By Hannah Thompson

Around 6,000 sheep, and 100 cows, are stuck in the snow on the Glandon pass, around 1,900-2,000 metres up, near the commune of Saint-Colomban-des-Villards in Savoie, Auvergne-Rhône-Alpes. Heavy snowfall surprised farmers from Friday night (September 25), after temperatures dropped suddenly and unseasonably for the time of year.

A forecast expert at news channel LCI, said: “This quantity of snow has been seen in the past in September, but it is still [rare enough to be] remarkable.”

The mayor of Saint-Colomban-des-Villards, Pierre-Yves Bonnivard, is now helping to coordinate a crisis team, with the wider department, to help.

More than six tonnes of feed have already been lifted to the site, and a snowplough was able to open some roads to allow around 20 bales of hay - weighing 300 kg each - to be brought up.

The mayor told France Bleu Pays de Savoie: “The most important thing was to ensure that they can all eat, and we have managed to do that. There is too much snow for them to scratch the ground and eat the grass.”

Now, he said the priority is to evacuate the animals and move them to lower ground, away from the snow.

He said: “Evacuating all the animals will take almost a week. We can move one flock per day [so] we have to feed them while waiting. But we have a priority flock [to move first] because some ewes are ready to give birth. We are doing everything we can to avoid any losses.”

Farmers reportedly began to bring their flocks down to lower ground before the weekend, as soon as the snow forecast was broadcast. Yet heavy snow fell even faster than predicted, and some shepherds were forced to spend the night in huts on the mountain to stay close to the animals.

Between 10-15 cm of snow fell at 1,100 metres, and between 30-50 cm above 1,500 metres. Very cold wind created further snowdrifts of up to two metres high in some areas. Temperatures in the mountains still remain very cold - as low as 6C at 1,900m - and so the snow is unlikely to melt soon.