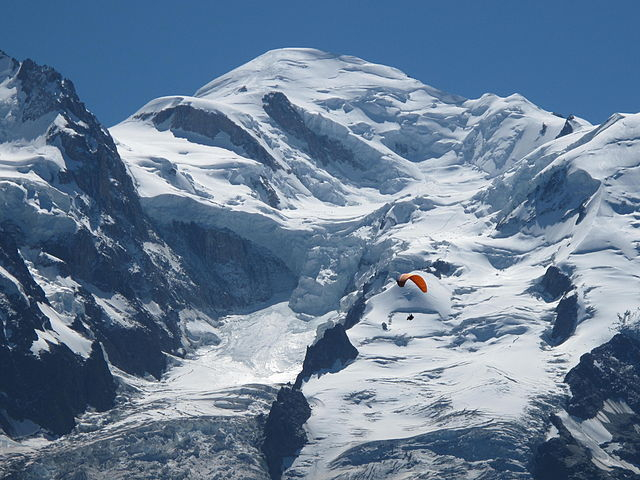 Respected mountain weather expert Yan Giezendanner makes all of his predictions from his home in Chamonix, near Mont Blanc.
By Hannah Thompson

Yan Giezendanner is a former Météo France forecaster and advance forecaster who specialises in mountain expeditions. He is based in the Alpine town of Chamonix, and is much-respected among skiers, mountain adventurers and expeditionists.

He created a long-term mountain weather prediction system years ago after realising that many people were leaving to go on mountain trips but having to abandon their expeditions “because the weather was bad”, and they could not predict far enough in advance for longer or more arduous trips, such as mountain climbs and summits.

The system uses satellite telephones and the internet, and allows the forecasters to make long-term predictions that could have far-reaching implications for mountain users and beyond.

Mr. Giezendanner was speaking about the development of his prediction system in a series of interviews in France this week. He also gave his long-term forecasts for the next three to four months of 2020, and into the early months of 2021.

“It seems as though it will be a good winter for ski stations. At the end of the year we will have snow at low altitude, and in January and February, we will have...colder temperatures and snow in mid-mountains. This year we will see a colder wind and more frequent snowfall. It won’t snow all the time, but we will have quite snowy periods into the month of March.”

He said that this was in contrast to recent years, in which ski stations in France have suffered due to a lack of snow.

Explaining his expertise, he said: “I developed the external system because there was an important coupling: the internet and satellite phone. The two put in symbiosis allowed me to work from home and to be able to communicate with the mountaineers who had satellite phones.

“This was an important phenomenon and a great help. I am not the only one...We are a little community.”

Mr. Giezendanner explained that there are fewer people doing long-term projections for the mountains.

He said: “When you make a forecast for the 24 Hours Le Mans or the Tour de France, there are a lot of people there. [But] the mountain community is quite unique.”

He explained: “Just as when you make a prediction for a storm this afternoon, [with long-term forecasts], it’s a computer that can calculate it over several months. There are even computers now that can calculate the weather across several years.

“They are mathematical and physical calculations that can take into account the entire Earth, not only in Europe, but across the world. We can tell the temperature of the oceans, the state of the vegetation; there are many variables...and in a few years, we should have computers that can offer us more reliable forecasts for the entire season.”

From the Alps to the Himalayas

Mr. Giezendanner now applies this system to not only the Alps, but also more extreme mountain ranges such as the Himalayas - all from his home in Chamonix.

He has advised high-profile mountaineers on a number of significant climbs, such as Sophie Lavaud, the first Swiss-French-Canadian mountaineer who in 2018 became the first of her nationality to summit all eight world summits over 8,000 metres.

Mr. Giezendanner said: “Once mountaineering was completed in the Alps, the playing field shifted elsewhere. There were already people in the Himalayas: already talk of Herzog, of K2; but afterwards, amateur mountaineers and guides went to the Himalayas in autumn and spring, and I realised that they often came back empty-handed.

“At the beginning, I didn't know [the areas] at all. Now, my experience is that...I know them: I know where you have to go, what are the climate conditions, and why…I know the difference between Everest and Makalu..I can clearly say, ‘You must attempt the summit on this day, not this one…’.”

He said that mountaineers often ask him for weather advice while still at base camp, because he has experience and knowledge of where avalanches may have already occurred, and things to watch out for such as moving or shifting crevices, or high winds.

He said: “Making a good prediction is one thing, and many people can do it. Offering advice, that’s another thing [altogether].”

On the subject of whether he has ever been invited to go to a mountain base camp, Mr. Giezendanner said: “Yes, people have asked me! But I tell them, to work, I need to not be cold, I need comfort, and high-speed internet. Some expeditions do it [though], with a doctor at basecamp, radios to communicate…

“I find it dangerous how in the Himalayas now, how everyone has a satellite phone, data and maps, but everyone is doing the same thing, so they will all leave at the same time. But as I am here [at home], there is no pressure. I say to them: ‘This is a good weather window, but now it’s up to you to find your own solutions [on how to summit].

“The best mountaineer is the one who knows how to wait. When you’re waiting [for good weather], alone, in a tent, for a week or two weeks, that is real mental and physical strength. If you get annoyed and leave [whenever], you could get trapped.”

Dramatic drop in temperatures forecast in France this week