Thousands march across France against rise of ‘the far right’ 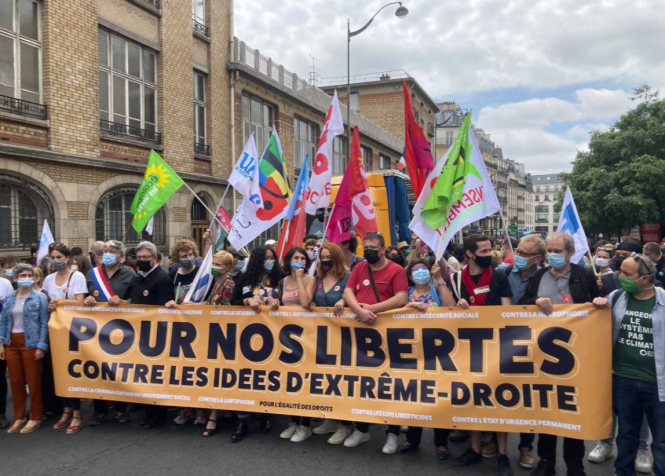 Protestors marched in 140 towns to denounce what they called “attacks on freedom” due to the rise in support for far-right parties, and laws that they say are “killing freedoms”.

Two people were arrested and placed in police custody for the alleged ‘flouring’ - throwing flour over as a form of protest - of Mr Mélenchon, who is a somewhat controversial figure even among the left.

Mr Mélenchon later reportedly said: “I am alive, everything is fine, it’s only flour.”

Eric Coquerel, from la France Insoumise, hailed the marches as a success.

He told France Info: "The side of freedom, of the fight against the far-right, against racism, must show again its potential for fighting back, this was the point [of the march].

"In France, there is not only the far right, the far-right agenda, the far-right themes that the government is after; the classic right. [But] there are also people who are totally opposed to this vision of things. That's what we did today with great success [show our opposition to the right]."

*There is often a significant difference in France between the protestor numbers given by the authorities and those given by the organisers, due to the fact they do not use the same methods to count people.

Read more here: Why is there often a difference in protestor numbers between what authorities and organisers say?)

Which French regions look set to vote far right in June’s elections?
Macron face slap: Why did the attacker shout ‘Montjoie Saint Denis’?
New critical version of Mein Kampf to be sold in France from June 2

14 hours ago
3
‘Bakeries will die’: Anger in France at Leclerc’s 29-centime baguette

4 days ago
4
France to bring in vaccine passes: What will change and when?

10 hours ago
5
Travel France: Are under 18s covered by parent's Covid vaccine status?