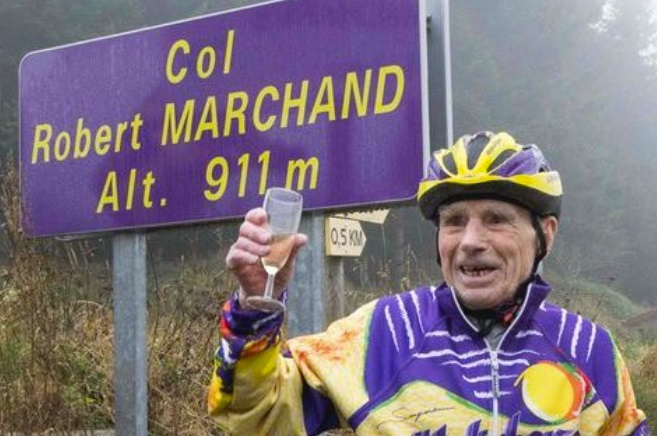 Robert Marchand continued to cycle competitively well after his 100th birthday, and even has a summit named after him in Ardèche Pic: CitizenVelo / @Citizenvelo / Twitter

Tributes are coming in for record-breaking centenarian French cyclist Robert Marchand, who has died at the age of 109.

Mr Marchand died overnight on Friday May 21 at his care home in Mitry-Mory (Seine-et-Marne). At age 105, he was recognised as the “world’s oldest competitive cyclist” by Cyclist magazine.

Town mayor Charlotte Blandiot Faride paid tribute, saying: "Robert was a real champion, someone who could dream but also kept his feet on the ground. He was also a friend, someone who was very engaged with unions and politically very left-wing. He was a symbol of our town.”

Cycling authority La Fédération Française de Cyclisme wrote: “We would like to pay a heartfelt tribute to him today and extend our condolences to his family.”

As a communist, Mr Marchand refused to accept a gold medal from then-Sports Minister Roselyn Bachelot in 2009, due to his political convictions.

On Saturday (May 22), the secretary-general of the Parti Communiste Français (PCF) paid homage to the sportsman.

Fabien Roussel wrote: “He was inexhaustible. At 108 years old, he continued to take up every challenge on his bike and made us dream. He had lived through the Spanish flu, World War One and World War Two...Friend and comrade, dear Robert Marchand, rest in peace.”

RIP Robert Marchand, one of the founders of L'Ardechoise, holder of cycle sport records in the 100 year plus age group.

Dear #Oxfordshire Follower,
Today we wish a sad farewell to an absolute inspiration. Farewell #RobertMarchand your ride is done and it was long and amazing https://t.co/Nyqhh6ZEsD

‘Use everything, abuse nothing’

Born on November 26, 1911, Mr Marchand had an extraordinary life. Despite first discovering cycling as a teenager, he was deemed to be too small to succeed in the sport, and so gave it up.

He then became a firefighter, a sugar cane planter in Venezuela, a lumberjack in Canada, and a wine salesman among other pursuits, before returning to cycling at age 67. He went on to race four Paris-Roubaix, eight Bordeaux-Paris, and 12 Ardèche (l’Ardéchoise) events in his category.

His strong health meant he broke several records. In 2012 in Lyon, he won the record for the fastest time for cycling 100 kilometres in the 100+ age category, with four hours, 17 minutes and 27 seconds.

He celebrated his 107th birthday by cycling 20 kilometres between Privas and Pouzin in Ardèche. The department even has a summit named after him.

Rest in Peace Robert Marchand, the world’s oldest cyclist. He was a short guy legend, nazi resister and a unionist comrade who happened to hold the hour record for the 100+ categories. He was still riding at age 109, when he passed away in his sleep. Goodnight sweet prince. pic.twitter.com/OS0IyxrL9d

Even in his elderly care home, he had an indoor cycling bike installed in his room.

He was well known for his sense of humour and indefatigable approach towards the sport, once replying to a journalist after a race: “No, I am not tired. I thought my legs were hurting but actually, my legs were not hurting.”

In 2017, Mr Marchand explained his good health and advanced years to FranceInfo. He said: “You must use everything but abuse nothing.”