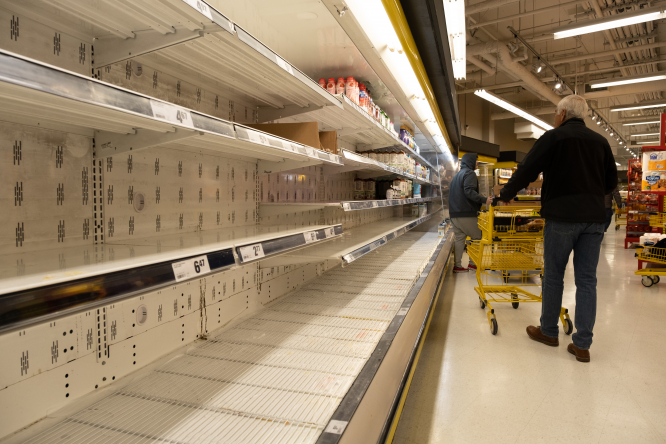 Disruption to global supply chains due to Covid and increased production and delivery costs are causing stock shortages for many products Pic: Steeve Raye / Shutterstock

Global disruptions caused by the Covid health crisis are having a knock-on effect in countries around the world, causing stock shortages and price hikes.

We look at which products are already impacted in France, or could be impacted, in the coming months.

An increase in global demand and disruption to supply chains are causing delays to deliveries and shortages of clothes and shoes. Price increases are expected over time.

Shoes being delivered from Asia are particularly affected. Yohann Petiot, general director of professional organisation Alliance Commerce, told Le Figaro: “Only 30-40% of stock has been delivered in some shoe shops.

“The situation is not as worrying for clothes yet but could be in the future.”

This is due to port closures in China, ordered every time a Covid case is identified. Mr Petiot said: “Production has also been interrupted by electricity cuts caused by the energy crisis.”

High demand is pushing up prices for maritime transport and could, in turn, increase prices for products on shop floors.

It is also already impacting sales, with Adidas and Nike both forecasting losses in the coming months as trainers are often produced in Asia, whereas leather shoes are more frequently made in Europe.

At the end of September, IKEA said it was missing 20% of furniture and small goods stock in France.

The chain told AFP: “Keeping stores and warehouses open has been difficult. In 2021 we saw a substantial drop in availability [of products].

Lack of drivers and packaging materials is also causing serious delays to deliveries.

He told Le Figaro: “80% of the external supply of furniture in France comes from Europe which limits the risk of shortages.

Supplies of wood are also returning to normal levels.

However, it is more uncertain for white goods and household electronics that are made using components produced in Asia.

Some shops are predicting shortages, but the biggest impact is likely to be on delivery times.

The production of computers, tablets, TVs, smartphones and games consoles has been particularly affected by worsening shortages.

Apple has only been able to produce 80 million iPhones, instead of the planned 90 million this quarter, and some clients who ordered the new iPhone 13 when it was released in September are still waiting for the product to arrive.

Sony’s PlayStation 5 is also expected to be subject to small deliveries in France, with no large-scale availability planned for Christmas.

For TVs and computers, shortages mean some screen sizes and models are not available, and distributors have said it is becoming increasingly difficult to predict when orders may arrive.

This is partially due to a global shortage of semi-conducting materials used in electronics, and factory closures due to Covid in countries such as Vietnam.

Bikes are typically made of 80 different parts ordered from specialist producers, rising to 400-600 parts for top range models. Supplies have been impacted by disruption to global production.

Sports equipment provider Decathlon said: “The pandemic has created a lot of disruption such as slowing of production or transport, changes in consumption, a brutal increase in online shopping, blockages on freight routes, and so on.

“These disruptions are significant and it will take a long time to correct them.”

It said that delivery delays for some models were up to 500 days, but the brand had worked to mitigate the impact for many products by anticipating orders for 2021 the previous year and building up stock.

Virgile Caillet, representative for Union Sport et Cycle, told Le Figaro: “There are notable difficulties getting parts from Japan, but in the first half of 2021 we sold more bikes than in 2020, so production will increase.”

Raquettes (cross country ski shoes) and sports shoes are also likely to be hit by shortages, said Mr Caillet. “Before Christmas there’s a risk that supplies will run low. Some signs are starting to appear.”

But some shops are mitigating the shortages by falling back on stock that they were unable to sell during the health crisis when shops were closed.

Brice Blancard, manager at Union Sport et Cycle said: “For alpine skiing, the stock has already been in stores for a year, so orders are low this year and international difficulties have not affected ski materials.”

He said increased demand for products that had been used in place of alpine skis last year, such as cross-country skis and sledges should not impact supplies.

However, while stocks are guaranteed until the end of the year, there is less visibility for the beginning of 2022.

More toy shortages than normal are expected in the run up to Christmas.

Boss of toy store King Jouet, Philippe Gueydon, told Le Figaro: “There will be presents under the Christmas tree, but perhaps not all of the normal items.”

The store is currently missing 20% of its Christmas catalogue, with most expected to be delivered but some still proving difficult to find.

These include toys with electronic elements and toys produced in Asia. With 57% of toys sold in France made in China, shortages could be significant and customers are advised to order Christmas presents as early as possible.

While prices for deliveries to shops are likely to increase, it is unlikely this will be reflected in prices for customers.

As with other products, the difficulties come down to increased demand following the health crisis, as well as factory closures, rising production costs, and lack of delivery drivers.

The impact on prices for consumers will be decided during annual negotiations between suppliers and distributors in early November.

Essity, producer of Lotus toilet paper, told Le Figaro that prices had increased by 67% for paper pulp in the past eight months and by 50% for packaging.

A representative from paper and cardboard producer Copacel added that “price increases were likely to continue into 2022”.

A lack of heating boilers is also causing long delays for installations in homes in France.

In addition to global factors, many households in France are also hurrying to change their boilers before the deadline for CEE financial aid, which has increased demand by 30-40% in the past few months.

Read more: Help for replacing an old oil boiler with a heat pump in France?

Now, factories are struggling to keep up, especially as raw materials and factory staff are lacking. Jean-Paul Ouin, representative from boiler makers union Uniclima said: “The situation has got better in terms of the stock of metals, but the lack of electronic components is ongoing.”

These include semi-conductors, also in demand for electrical goods such as toys, TVs and smartphones.

Unions have successfully lobbied the government to push back the deadline for CEE financial aid, meaning households now have until December 31 (instead of the previous September 30 date) to complete boiler installations.

Mr Ouin said: “There is no risk of people finding themselves without a boiler. In urgent cases we do what needs to be done with the materials we have.”

Shortages of building materials have been ongoing for months in France, but conditions are starting to improve.

“The problem today is with products that need to be manufactured, such as boilers. There is not so much of a problem with raw materials.”

A return to normal levels of wood and plaster stocks is helping.

For plaster, delivery delays are now down from weeks to days.

Supplies of metals such as steel, copper and iron are also improving, but there is still a shortage of aluminium, with deliveries taking five months, as opposed to the normal three.

However, even when supplies return to normal, a lack of delivery drivers is expected to have a continued impact on delivery times.

The l'Association nationale des produits alimentaires said the issue with food is not that supplies are running low, but rather as a result of “pricing tensions caused by global issues in transport and logistics”.

Rising prices can be explained by 5-51% increases in costs for raw materials for food products, a 3-59% increase in industrial materials used for packaging, and an 86% increase in sea transportation costs.

Fruit prices have also been impacted by April frosts, which damaged stocks of summer fruits such as apricots and peaches.

Poor weather conditions during growing season in Canada, the world’s largest durum wheat producer, have also impacted prices for flour and pasta, as has high demand in China, and high energy prices driving up costs for production and transport.