Cookie Consent by FreePrivacyPolicy.com Why are there more wasps in France in 2020? French News and Views in English | The Connexion
7 may 2021
Classifieds Currency exchange Newsletter
Login Register BASKET
Facebook Twitter 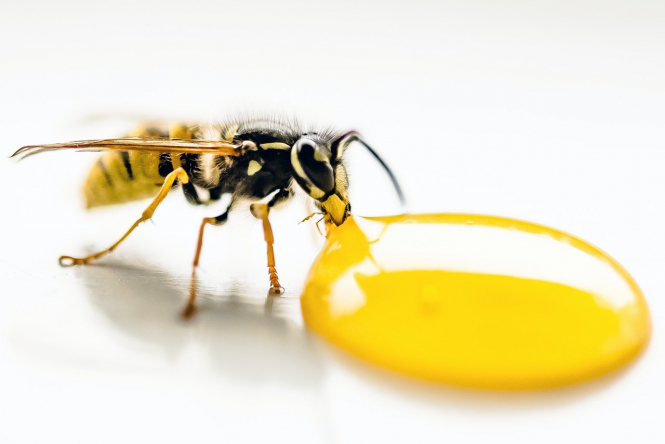 Wasps get much of their nutrition from our sweet food, says Quentin Rome, as he explains the rise in population in 2020
By Connexion journalist

A spike in wasp numbers has been recorded by wasp destruction companies across the country, especially in Bas-Rhin, Hauts-de-France, and Ile-de-France; as well as in the Pays de la Loire and the coast of Nord-Pas-de-Calais.

Some had speculated that it could be linked to a fall in human activity due to confinement, or to the warm temperatures seen this summer.

But entomologist (insect expert) Quentin Rome, from the natural history museum le Muséum National d'Histoire Naturelle (MNHN) has explained the phenomenon to news source 20 Minutes, and suggested that the rise in numbers is quite normal, and linked to conditions seen last year, rather than the events of 2020.

He said: “This feeling of being taken over by wasps comes back every year. Last year, I was getting interview requests on the same subject, even though we were actually seeing sharp drops in the wasp population.

“This is because in France, we have two species of wasps; the germanic, and the common. They are both interested in our food, and are very present in urban and almost-urban spaces. That’s why we have the impression that they overcome us every time we sit down to eat outdoors.”

So has there been a rise?

Overall, yes. Estimates suggest that the wasp population changes frequently in France, fluctuating significantly by year. These are only estimates, said Mr Rome, as there are “few statistical studies that allow us to follow populations precisely”.

But, he said: “We estimate that in 2019, wasp populations had fallen 300% compared to 2018. It is still too early to estimate for 2020, because we are in the middle of the wasp season, but we can closely estimate, this time, that populations have increased five times’ over compared to 2019.”

While some have suggested that confinement may be the cause of this rise, Mr Rome has disputed this.

He said: “I don’t really understand what it means to say that confinement has had a positive impact on wasp populations. I would tend to say the opposite.

“Confinement has meant that we have spent a lot more time in our gardens, near parks...so much so that wasp nests have been detected earlier than normal. I have especially noticed this among the Asian hornet, whose population I am tasked with monitoring in France.

"I received photos of nests from the first weeks of confinement, which were young nests, or nests that in previous years had not been found.”

What about warm temperatures?

The actual temperature of our seasons are less important than the stability of the temperatures, Mr Rome said. Last winter was relatively mild, as was spring, meaning that there were not the peaks and troughs of temperature that can cause problems for wasps.

Mr Rome said: “Of course, a very challenging winter can cause a rise in mortality for wasps, but they can resist very low temperatures and frost. More important to them are stable temperatures...unseasonable spikes and changes can interrupt their [life] cycle.

“Heat during winter, as we have seen in the south over recent years - such as 20°C at the end of December, followed by frost - is likely to wake up certain queen wasps, who will then have nothing to eat, and will likely die.

“Similarly, the late frost that we saw in Spring 2019 in several regions of France also caused a higher death rate among queens.”

Is it possible to coexist peacefully with wasps?

According to Mr Rome, despite their menacing reputation, wasps are important for biodiversity.

He said: “We often hear about bees, because they are pollinators. But many other insects do this too, including wasps. They are also insect predators, and tend to focus on the most abundant ones, such as tree caterpillars. In this way, they help regulate [the environment].

“I am therefore not in favour of major destruction of wasps that annoy us. Of course, a nest can be dangerous - when it is in a passageway, for example - and we should call a professional to get rid of it.

“But the solution to wasps flying around our table is to give them part of our meal. A quarter of an hour before eating, place some fruit or meat around three to four metres away from your table, and then they will usually leave you to eat in peace [after].”

So is the rise this year good news for biodiversity?

Overall, the rise in wasps this year is not a simple sign of “good” biodiversity, Mr Rome said, with many other factors also at play.

He explained: “It is not as simple as that; the rise seen this year is linked to the weather, and there are some years with more [wasps] and some with fewer. That’s normal, nothing new or unusual.

“As with other species, overall, they are dying, because of intensive farming. This trend is likely to continue this year. The rise in the Asian hornet is also bad news for bees, as they are prey.

“It hasn’t rained ‘normally’ in France for several years, so much so that trees are giving fewer fruits and flowers less nectar. This is likely to cause resource problems for many insects.

“This issue is not so significant for wasps or the Asian hornet [though], as they find much of their food from our sugary food. Other insects can also do this, but much less, and they prefer flowers.”

War on wasps and hornets declared in the Dordogne