Explore the Côte d’Azur in miniature in France's latest exhibition 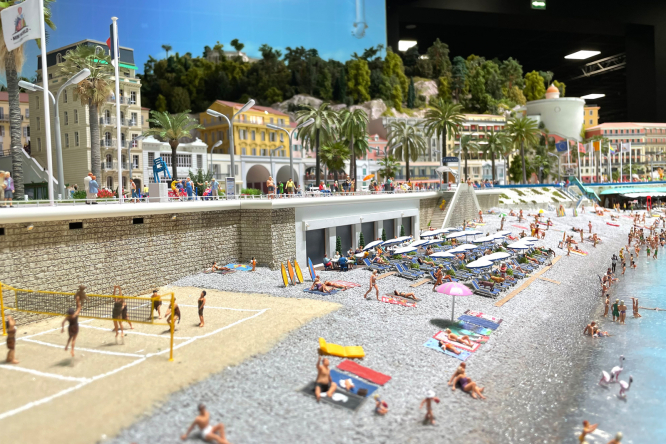 Spot famous people in the new attraction – Brigitte Bardot and the Beatles’ Yellow Submarine for example – and the beautiful lighting shifts from day to night Pic: Courtesy of Mini World Côte d’Azur

The popularity of models and mini worlds in France shows no sign of waning. France Miniature in Elancourt (near Versailles) is open again, with its recreation of 117 of France’s most spectacular monuments.

The outdoor park is laid out over a huge map of France stretching over 12 acres, and models include a miniature Eiffel Tower, the Stade de France, the château of Chambord, and Mont Saint-Michel. The scale is 1/30 and the park also includes children’s rides, slides, and climbing frames.

In the Loire Valley, Amboise boasts the Parc Mini-Châteaux which contains 41 miniature models, and for children there are miniaturised vintage pedal cars for children to drive around the gardens. There are also bouncy castles.

The Jardin des Trains Ardéchois just south of Valance is a large outdoor model railway set in realistic scenery. A firm favourite with railway enthusiasts, it has bridges and sidings, cyclists, station masters and many model trains running on the tracks. There is also the outdoor Parc Miniatures in Plombières-les-Bains (between Nancy and Besançon) which boasts scaled down reproductions of monuments in the East of France along with a mini golf course.

Further south on the Riviera, a brand new miniature attraction is also attracting new fans. Rather than being an outdoor attraction of models set in gardens, Mini World Côte d’Azur, is indoors and opens all year round.

Originally slated to open in autumn 2020, it finally opened in May, and is proving every bit as popular as its big sister in Lyon. “In fact, the reason we opened a second Mini World in Toulon was because the landlord of our premises in Lyon loves the attraction so much,” says Marketing Director Steven Vasselin. “He was so keen that he offered to finance a second Mini World, housed in another of his premises, this time in the South of France.”

The new exhibition has taken two years to construct, and is every bit as magical and fun-filled as the original one, which has received more than 700,000 visitors in just four years, making it Lyon’s favourite leisure attraction.

The new exhibition is completely original however, with scenes stretching from Marseille right along the coast to Nice, including the Vieux-Port, the Calanques, the Promenade des Anglais and Saint-Tropez. The scale is 1/87 and the exhibition covers 2,000 m2.

There are hundreds of vehicles and trains travelling along the roads and railways, and countless scenarios of daily life in Provence as well as along the beaches. There are buttons which allow visitors to switch on some of the animations.

“The difference from Lyon is that the team of 15 creators are more experienced now, so this second Mini World is even better than the first. There are still famous people to spot – Brigitte Bardot and the Beatles’ Yellow Submarine for example – and the beautiful lighting which shifts from day to night. An innovation is the moving seascape, created by embedding video screens to make the ocean waves. Visitors love watching the lights reflected in the water.”

Families particularly love to see the gigantic aircraft carrier Charles de Gaulle in miniature, docked in the port of Toulon. “It’s such an iconic vessel, people of all ages love to spot it.”

The model-makers have gone to great lengths to make each scene or ‘world’ as realistic as possible, using multiple wall projectors, speakers and emissions of various scents to create a fully-immersive experience. The scenes are very animated with lots of action, even the figures move, so that visitors can lose themselves in the action. “There are no stairs or steps, because Mini World appeals to all ages, although obviously many visitors are families with children.”