This Normandy village is home to a 1,200 year old oak tree 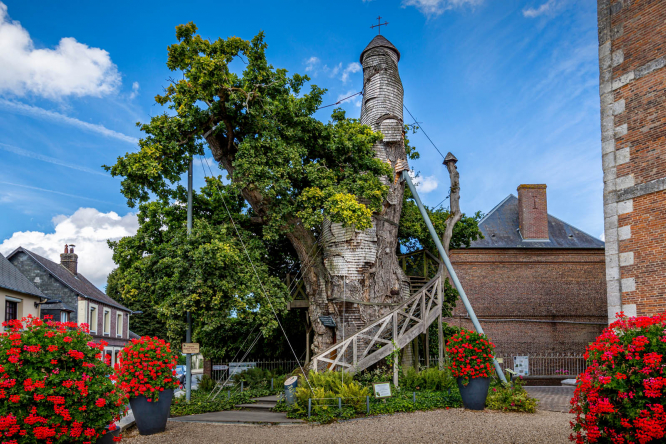 'Oaks can survive a hollow trunk as all their nutrients are transported by vessels close to the bark' Pic: CatherineLProd / Shutterstock

Allouville-Bellefosse, Seine- Maritime, Normandy is famous for its unique oak tree, thought to be around 1,200 years old, and reputed to be the oldest in France. It is so large around the base with a 15m circumference, it houses two chapels, one above the other. It is more than likely William the Conqueror’s soldiers marched past it on their way towards England.

Roger Devaux, is a local journalist who knows all of its history:

“By the 17th century it was already hollow. A local priest tested its size by seeing how many school children could fit inside. The answer was 40. The village priest, Abbé Du Detroit then installed an altar and a painting of the Virgin Mary. In 1696 it was sanctified as a chapel dedicated to Notre-Dame de la Paix. Later, in the 19th century, Empress Eugénie, wife of Napoleon III gave a wooden statue of the Virgin Mary as a gift, still there today. Above, there was a cavity nearly as big, which was furnished with a bed, chair and table and called the Hermit’s Room. This was later converted into the Chapelle du Calvaire. A staircase with a balustrade winds round the outside to reach the upper chapel.”

The oak has been struck by lightning several times, so though unusually wide, it is not very tall. It has escaped an early end on two occasions:

“Originally there were two other spectacular trees near the church. One was a beech, with branches which grew horizontally and then turned up vertically to form a space which could be used as a room. A floor was laid and steps led up to it so 16 could sit at table. Another tree could sit 12.

Soon after the Revolution, they were burnt down by anti-clerical protesters, but the oak was saved by a quick thinking teacher, Jean Baptiste Bonheur. He put up a sign saying “Temple of Reason”, to disassociate it from the church, and it was spared.”

In 1989, one Saturday afternoon, a tourist noticed the staircase had moved and alerted the Mairie:

“The tree was in danger of collapse. Professor Bourdu, a biologist from Paris gave valuable advice and a steel pillar was inserted to keep the trunk upright. It cost the commune two million francs, a fortune, but the tree is still standing today.”

He says no-one really knows the secret of its longevity: “It is possible there is a spring supplying permanent water and oxygen.

Oaks can survive a hollow trunk as all their nutrients are transported by vessels close to the bark.”

Up until forty years ago there were two religious services a year with the congregation standing outside. Now there is too much traffic. Soldiers in the 1870 war against Prussia and in the First World War prayed there before battle.

“It is central to the village in every sense,” says Mr Devaux. “The shops are called after the tree – Charcuterie du Chêne etc and so are the associations. It brings us thousands of tourists a year, and even during this difficult period we see visitors every day. We are immensely proud of our millennium oak tree. It is very much alive, producing acorns every year. There are many other remarkable oaks in France, but none quite as extraordinary as this one.”