Did you know? First WW1 Tomb of the Unknown Soldier has French origins 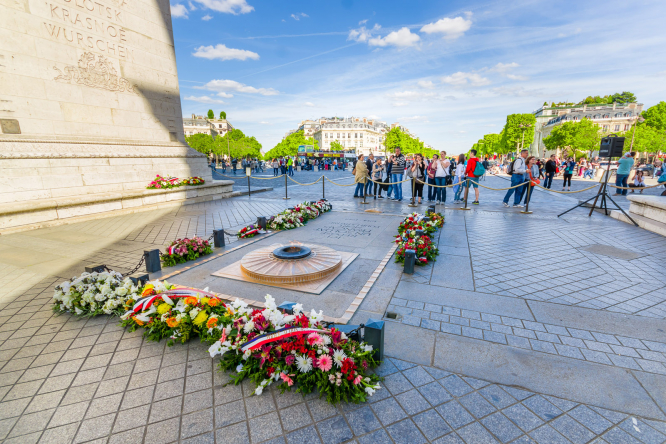 In 1923, a journalist, Gabriel Boissy, suggested an eternal flame should be lit next to the tomb to the unknown soldier, so he should never be forgotten Pic: Fotos593 / Shutterstock

The first memorial service took place on the same date, November 11, 1920, in both London and Paris. The United States followed shortly with the burial of an unknown soldier on March 4, 1921, at Arlington National Cemetery, Virginia.

In France, the idea for the Tomb of the Unknown soldier came from Francis Simon, who was President of Souvenir Français in Rennes, an association created in 1887 to commemorate soldiers who died for their country.

Mr Simon made his idea public in 1916, saying the body of a soldier who died on the battlefield and who could not be identified would represent all of those who lost their life whilst fighting. It was reported widely in the press and adopted by Parliament after the war, in 1919.

The Minister of Pensions, André Maginot, who himself had been wounded in the war chose the underground fortress at Verdun for the ceremony where the soldier would be chosen.

On November 10, 1920, eight coffins of unidentified soldiers from eight different sectors on the front, were laid out. A young soldier, Auguste Thin, from the 132nd infantry regiment, was given the honour of choosing the coffin. He was the son of a man who had died on the battlefield, and he had voluntarily signed up in 1918.

He was given a bouquet of red and white carnations to put on the coffin of his choice.

He chose the sixth one, and later, explained why: “A simple thought came to me. I belong to the sixth division. If I add up the numbers of my regiment, 123, that too comes to six. My decision was made. It would be the sixth coffin I passed in front of.”

The next day the coffin was taken to Paris. The final resting place had still not been decided. There was a ceremony in the Pantheon and the coffin was then placed in one of the rooms in the Arc de Triomphe. It was not buried under the arch until January 28, 1921.

In 1923, a journalist, Gabriel Boissy, suggested an eternal flame should be lit next to the tomb to the unknown soldier, so he should never be forgotten. On November 11 of that same year it was lit by André Maginot, and since that day it has never gone out.

An association, La Flamme Sous L’Arc de Triomphe, made up of 150 veterans’ associations, was founded in 1925 to take it in turns to look after the flame. Each day, at 18h30, there is a procession under the Arch to ensure the flame lives on.

One tower per family in this noble medieval site in France
3 December 2021
More from French Facts
More from Connexion
Get news, views and information from France
Join the newsletter
Subscribe to The Connexion