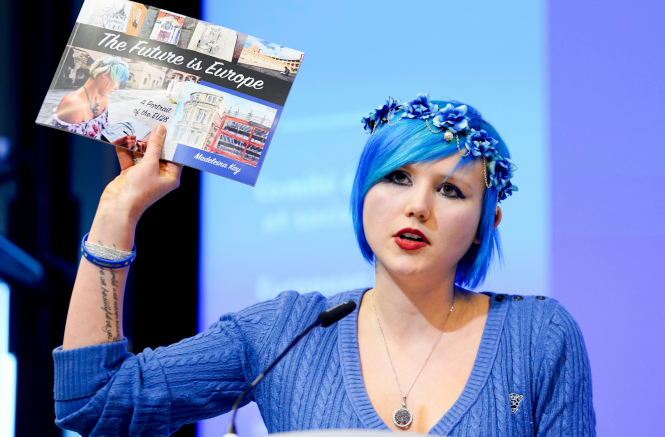 Madeleina Kay with her book which was part of her project for the Charlemagne Youth Prize.
By Liv Rowland

Madeleina Kay from Sheffield, UK, dropped out of her landscape gardening course at Sheffield University in 2017 to campaign full-time against Brexit with a unique blend of songs, art and colourful costumes. She is especially known for her alter-ego as ‘EU Supergirl’ and as the winner of Young European of the Year in 2018, awarded by the Schwarzkopf Foundation, an independent body promoting European solidarity.

Madeleina, 26, who Connexion last spoke to for our first Brexit helpguide in 2018, has now been named as the UK’s last winner for the European Parliament’s European Charlemagne Youth Prize.

Five people or groups, aged 16-30, put forward projects from the UK this year and a national prize winner is only selected if one meets the criteria to win. National winners are invited to three days of events at Aachen in Germany, including a ceremony where first, second and third top prizes are awarded to the best projects, including money amounts. This has been delayed this year due to the Covid-19 crisis.

The European Parliament's main spokesperson, Jaume Duch Guillot, told Connexion Madeleina was eligible for the 2020 award because she applied while the UK was still an EU member.

He said: “She was selected as UK winner because her project completely matches the award criteria: her project promotes European and international understanding, fosters the development of a shared sense of European identity and integration and serves as a role model for young people living in Europe.”

Is this prize some consolation to you, after the disappointment of Brexit?

Yes, it’s recognition from the EU itself of what I’ve devoted my life to for the last three years. It’s confirmation that the effort I’ve put in wasn’t wasted and I hope the publicity from the award will help people outside the UK also to be aware of the work I’ve been doing.

This last year I have focused very much on the EU rather than being anti-Brexit so I consider it is still highly relevant for what the EU is striving to achieve.

Since getting the Young European award I’ve realised there has been something missing from the anti-Brexit campaign in the UK. It was very focused on opposing Brexit and campaigning for another vote, but they weren’t making the pro-EU argument. I found that bizarre, and it totally failed.

In the referendum campaign, the 'Stronger In' campaign focused on the negative economic impact and failed to engage anybody, and the same people took over the Remain campaign with People’s Vote.

And then that insisted that it was impartial on Brexit, so it wasn’t even making the anti-Brexit case, it was all about having another vote.

And it failed again, we didn’t learn from the mistakes. And I fear the same people still have power and influence and the same mistakes will be made continually.

When you tell people the positive aspects of the EU, what issues interest them the most?

Brexit is going to affect every part of society and how we operate, so it is hard to pinpoint specific points. But I made a booklet called 24 Reasons to Remain in which I picked out certain topics. It was shortlisted for the European Commission’s Altieri Spinelli Prize for Outreach last year.

The most popular when I shared the images on social media were about Erasmus, because so many people had personal stories about how it impacted their lives and really positive experiences, and clean beaches.

In the UK we have blue flags indicating clean beaches, but it’s not evident from the flags that it’s an EU initiative.

There are so many things like that, like the pet passport, consumer rights, food standards – which we see the UK government pulling out of – it’s everywhere and if you talk to any lawyer and ask how complicated it will be to pull out of all the laws we’ve created over the last 45 years with the EU they say it’s a complete mind-explosion and it will take at least 10 years to sort this out with huge administrative costs.

Which aspects of your work did you put forward as your ‘project’ for the award?

It’s what I’ve done over the last year: a tour of the EU 28 as it was, partly funded by the European Cultural Foundation and partly from crowdfunding or by having expenses covered by organisations that I was speaking at.

The focus was on European integration through culture and the arts. I didn’t even mention Brexit in the application though at events I did perform protest songs related to it and spoke about how Brexit is affecting European democracy.

But the point was democratic empowerment through creativity.

I believe that the rise of populism across Europe and lack of participation in European democracy is as a result of culture and that culture can change that by giving voice to human stories that reach people on a more personal level.

The only way to challenge it is by playing the same game to promote a positive alternative. Don’t even engage with the nationalist ideology, unless it’s to ridicule it.

I included a documentary I created, with interviews with other activists, footage of European landscapes and architecture, and songs and music.

Also, a book with my artwork from the tour promoting the cultural diversity of Europe, that the EU facilitates our access to. In every country, I did watercolours and charcoal sketches.

The other elements were a music video of a song called Always on the Road, about the importance of travelling, and an oil painting on a theme of European integration.

Does it feel strange to be the last UK winner?

Yes, it’s a tragedy that the UK is no longer eligible for so many EU funding opportunities and awards and this is just another example of how it’s going to miss out.

But this prize, like the EU's Spinelli or Jean Monet ones, are about promoting European values against populism and I do worry that if only EU countries are eligible, then those where populist movements are the worst have no funding and support to fight. Someone in the future who campaigns to rejoin won’t get that recognition or support.

Do you feel deflated now the UK has left the EU or are you still actively following what is happening with the negotiations? Are you worried about the UK’s refusal to extend the transition period?

To be honest, it’s just too stressy and anxiety-inducing to me, plus I don’t think it’s the best use of my resources and energy.

I’ve always focused on the long game. For me it’s about the cultural problem in the UK, to do with lack of education and the media pumping out Eurosceptic propaganda all the time.

My work has been focused on trying to shift cultural perceptions, through education and media coverage of the benefits of EU membership, so I’ve deliberately not focused on the itty-bitty details of the withdrawal process.

The Brexit process will play itself out and we have little influence on what the government is doing as it has a huge majority now.

What do you think the future holds for you? Do you have the energy to campaign to rejoin?

I did the best I could but the campaign needs to be realistic about what is achievable and I don’t think a rejoin is on the table for at least five years and another general election, but more likely a decade or two.

What needs doing is investing in education because the youth of today will lead that future rejoin campaign. But on a personal level, I don’t have the resources and support to carry on in the UK.

I either have to stop or to find an organisation in Europe where I can continue my work.

I am currently using my Young European of the Year grant for a project where I am interviewing ‘Brexiles’ who have left the UK and am painting portraits of them. It will keep me busy until the end of the summer. I’m doing one for each EU country.

In the meantime, I am looking for opportunities to leave the UK because when I hear the stories of these people who no longer felt the UK was their home because of the culture, and took action, I feel exactly like them.

It’s not just Brexit, it’s the inequalities, it’s the lack of opportunities outside London, the sexism, and the fact that people seem either angry or apathetic and I find both of those hard to deal with.

Your work in the last years will no doubt be remembered and appreciated by many.

I always felt that my work wasn’t a wasted effort no matter what the outcome.

Even on January 31 I was there protesting in London because it mattered that we were there to express dissent and that someone stood up to the people who were burning EU flags and shouting racist slogans.

When I arrived, a man came up to me and shouted in my face and said ‘you’ve wasted three-and-a-half years of your life, they’re all going home now’ [referring to EU citizens in the UK]. And I thought ‘this is why I’m here and why this matters’ that I spent three-and-a-half years saying ‘no, I’m not just standing by and letting this happen’.

Latest on Brexit and news for Brits in France