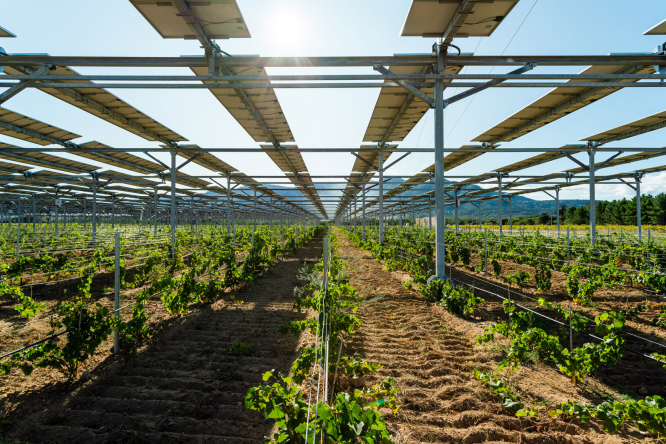 The grapes, planted in 2018 on a commercial vineyard near Perpignan, were grown as a pilot scheme next to an open-air parcel of three hectares of the same three varieties.

As well as producing electricity, the panels were aligned like Venetian blinds (called volets persiennes in French) to protect the crops as much as possible from scorching sun, hail and frost, as well as increasing the humidity of the soil during the summer.

Alexandre Cartier, spokesman for Sun’Agri, the company behind the panels, said: “Both the quality and quantity of grapes grown under the panels seemed at harvest to be superb and at least as good as the control vines without panels.

“It is too early to say if there is a marked difference in the wines made, but we will see.”

The panels were spread over 4.3 hectares on Domaine de Nidolères in Tresserre. This year, the trial plots were hit by frost that came late in the spring with a wave of polar air.

“We cannot do much to stop the frost when there is an air mass like that, so-called black frosts, but where frost is due to heat being radiated when there are no clouds, as happens with white frosts, the vines under the panels are protected to 2C compared to other areas next to them,” said Mr Cartier.

During heatwaves the difference can be more, with shaded vines up to 5C cooler than the surrounding area.

When hail threatens, the panels can be shut – they are the same as used in roof-top installations and should resist all but the largest hailstones. The first harvest was carried out by hand but mechanical harvesters can pass under the 5m-high panels.

“We have shown we are able to make significant differences to temperature, humidity and the amount of light on the grapevines – all factors which can translate to the grower being able to produce grapes best suited for the wine they want to make,” said Mr Cartier.

'It will become more and more important with global warming'

With the panels serving mainly to control the environment underneath them, their electricity production over a year is between 15% and 20% lower than if they were sited for optimum power generation.

It costs around €800,000 per hectare to install Sun’Agri’s system, which in most cases can be clawed back in 10 to 15 years. The panels have also been installed in two commercial orchards.

Mr Cartier is confident that more farms will follow suit, both in France, where there is government support in the form of higher guaranteed electricity prices than for normal panels, and elsewhere.

“With global warming, it will become more and more important,” he said.