French eco-activist on climate change: ‘We still have time’ 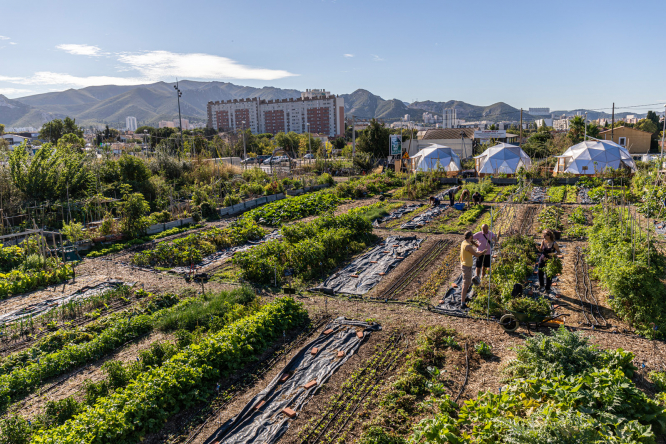 There are around 150 French groups linked to the Transition Network charity founded by British green activist Rob Hopkins in Totnes, Devon, in 2006.

That makes France one of the countries with the most activity, after the UK, he told The Connexion. Each group aims to create a more sustainable community, reducing consumption to fight climate change.

It won a César award for best documentary and looked at solutions for ecological challenges.

Whereas, with ecology, ‘transition’ had been mostly used to refer to his movement, Dr Hopkins said it became widely used in French-speaking areas for “all that stuff they talked about in Demain”.

He was recently invited to Nice to speak at a transition forum, he said.

“I started by coming back to the word. It is important to me and I would hate to see it go the way of ‘sustainable development’ and become a meaningless greenwash term [referring to superficial attempts by governments or corporations to be seen as eco-friendly while carrying on as usual].

'For us, it means communities which are re-imagining and rebuilding the world'

A key inspiration originally was the idea that there is a happy medium to be aimed at between over-consumption in the global north and deprivation in the south, he said.

The movement aimed to show the north could be “detoxed”, but in a way that felt like moving towards something exciting, rather than having something taken away.

“Someone once called it ‘hope with its sleeves rolled up’.”

Dr Hopkins said the network is mostly local in France, with each doing their own thing in their town, but groups across a wider region keep in touch and sometimes meet up to share ideas.

“We designed the movement as something to be started by citizens and it is still mostly like that. However, from around 2013 in parts of France the mayors got excited about it and decided they needed to do it in their area.

“The first I heard about was in Ungersheim in Alsace, whose story is told in the film Qu’est-ce qu’on attend? (What are we waiting for?).

“I went in around 2015 and it blew me away. It looked fantastic, but had been initiated by the mayor, though he had done all he could to get the citizens on board.

“Activism around food, energy and the local economy had all overlapped. They grow all the food for the schools at a market garden, they have a place turning surplus produce into different things, they have a big solar farm and loads of renewable energy projects in town and a local currency.

“I also went to Grenoble and met mayor Eric Piolle, one of France’s first Green mayors, who was enthusiastic. They had a festival all about transition.

“Last time I went, an official thanked me for his job because Mr Piolle had created a transition department in the mairie after my talk.” ‘Urban agriculture gardens’ have also been started in many areas, he said.

“There’s an amazing project in Mouans- Sartoux (Alpes-Maritimes), inspired by our movement, where the municipality bought land to create a market garden and they grow 70% of the food for the schools and it’s influenced the food culture in the town generally.

“Recently, I saw a project in a pocket of woodland to the north of Nice where a group of young people is creating a kind of small ecological school for families with young kids.”

'Awareness is growing quickly in France'

Dr Hopkins said his impression is that awareness is growing quickly in France, partly boosted by the citizens’ convention for the climate recently organised by the government, which he said produced some good, concrete ideas.

However, he said the Macron government had “messed up” with some tax policies that affected the low-paid which had sparked the gilets jaunes protests.

Climate change is mostly caused by the rich and by corporations, he said.

“I went to Grande-Synthe, near Dunkerque, when Damien Carême was mayor and he was phenomenal. He felt everything we do about climate change needs to start by service to the poorest.

“He introduced low-energy street lighting which saved half a million a year, which he gave as an income boost to the poorest residents.

“So I do think in France there is an excitement about the possibility of doing things differently. Ten years ago, if you saw a cyclist in Paris, you wanted to hug them, but now there is more and more infrastructure and the change is amazing, though there is still plenty to be done.”

Asked if transition means accepting lower standards of living, Dr Hopkins said it depends on what you are used to.

'Billionaire lifestyles of yachts and multiple homes are “massively irresponsible”'

The growth in inequality has been damaging to the climate, he said. “It’s not about having less of everything. If we get it right, it means more of other things, such as more interesting and varied kinds of work that we can be proud of, rather than working for a massive company which is destroying your children’s future. We need political imagination and a willingness to tell the truth about the situation we’re in, and getting on with it.”

Polls show strong support for action on climate change, he said, so the political ‘authorisation’ is there.

Asked how optimistic he is for the future, he said we should feel “terrified” of climate change if we have understood it properly.

A recent OPC report said we could stay below 1.5C of global warming compared to pre-industrial levels, but only with “immediate, rapid and large-scale reductions in greenhouse gas”. ‘Collapse scenarios’, with widespread failures of staple crops, could be on the way if nothing is done. He believes “there is still a chance”. The pandemic showed that drastic actions can be taken, and lifestyles and working practices changed, if there is a will.

“If the French government said ‘this is a climate emergency and we’re going to act on it in the same way as we did with Covid’, it could happen.

“I have no idea if it’s possible, but I’m not giving up. The stakes are massive.”

Dr Hopkins said his impression of the Nice event was that it was ambitious but flawed. It was “funded by companies like Air France and Total” and the mayor said the right things and spoke of tree planting and bicycles, but at the same time wanted to expand the airport and build energy -inefficient housing on farmland, he said.

Dr Hopkins felt Nice’s mayor, like many politicians, was still in a “bargaining” phase, rather than accepting the seriousness of the change required.

He feared the same would be the case of the Cop26 conference in Glasgow this month, which is likely to be “better than what we had before, but not enough”.

He feels the UK government sets a poor example and would rather it was being held elsewhere. “But the real work is happening in the more visionary municipalities, in those businesses that are taking this seriously, and at the community scale.

“Our message to the leaders is that stuff is happening around them, regardless of what they do, so get on board.”