Cookie Consent by FreePrivacyPolicy.com 'I am an ecologist and believe in the power of nuclear' French News and Views in English | The Connexion
21 june 2021
Classifieds Currency exchange Newsletter
Login Register BASKET
Facebook Twitter

'I am an ecologist and believe in the power of nuclear' 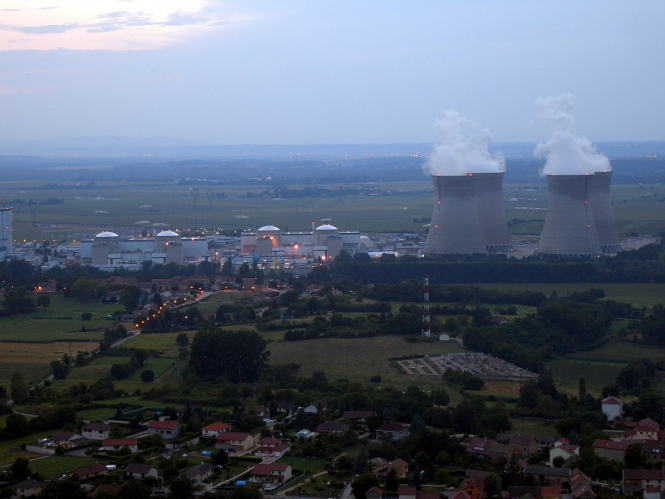 The nuclear plant at Bugey in eastern France Pic:

Jean-Marc Jancovici is an energy and climate expert and one of the 12 members of the Haut Conseil pour le Climat, which advises the government on ecology.

Unlike many environmentalists, he believes nuclear power should be first for future investments in energy. “Wind and solar power are not up to the challenge if we want to keep a similar level of industrial civilisation to today,” he said.

“Wind energy is not dense – 1,000m3 of air moving at 45mph has the same energy content, once it has gone through a wind turbine, as just 3ml of oil.

“It requires up to 100 times more metal to generate electricity from solar power or wind turbines than a nuclear reactor.

“It requires a thousand times more space to generate electricity from a solar panel than from a nuclear reactor.

“If we wanted to generate all our energy, not just electricity, with wind turbines, it would need 300,000 high-power turbines, one every 1.5km all over the country.

“Hydro-electricity depends on mountains and rivers, so it cannot help everywhere.

“Norway has five million inhabitants and plenty of mountains. It can supply every Norwegian with fully renewable electricity, but you cannot reproduce that situation for every country in the world.”

He believes nuclear power is the “most efficient way to soften the fall when fossil fuels eventually vanish”.

He said: “They will eventually vanish – either because we want to fight against climate change, or because they will run out.

“The UK knows that well. The peak of oil production in the North Sea happened 20 years ago. We will lose part of the amount of power we can generate anyway, but the fraction will be even higher if we get rid of nuclear power and do not regard it as a green energy.

“This is something most environmentalists have not understood. Many believe we can have as much green energy as we want with just wind and solar, but it is not physically possible.

“After having thoroughly looked at all the inconveniences of nuclear power, including waste and accidents, the balance of risks is in its favour and the risks of not using it are much higher.”

Mr Jancovici believes governments in Europe have not done enough to prepare for the consequences of climate change.

If governments and people do plan for a decrease, and eventual end, to fossil fuels, we will be forced to adjust our lifestyles because of more unexpected and unpleasant events that are beyond our control.

“The rate at which emissions should be decreasing if we want to keep the global temperature increase under two degrees is around 5% per year,” he said.

“No western country is ready to cope with the decrease of fossil fuels because what it roughly means is that the fleet of machines that work for us now will decrease, so the global economy will decline, leading to what I would describe as a structural recession.”

The Environment Bill being discussed in parliament does not go far enough, he argued. It is consistent with the fact that MPs, our president and the people have not fully understood the situation.

The loi climat et résilience bill aims to achieve a 40% reduction in greenhouse gas emissions by 2030 compared to 1990 and is now to be debated in the Senate. Notable measures voted for by MPs are: Extra help to buy an electric bicycle; sale of diesel and petrol lorries and buses banned from 2040; internal flights cut if there is a 2h30 train journey equivalent; no new shopping centres bigger than 10,000m²; landlords unable to rent out homes with very low energy-efficiency ratings.

“Change is already happening at a slow pace. It is concentrated on the unlucky, on people who become unemployed or get poor. The people who speak in the media don’t realise because they are well-fed and rich and often don’t live where these people are. Most of them don’t personally experience what is happening.

“Crops are suffering: In the summer because of drought, and in the spring due to early warmth followed by late frosts.

“Human migration triggered by climate change has begun and will grow.

“The Australian press reports that one third of health sector workers in the north want to move because the climate is becoming too hot for comfortable living.”

He said it is a race against time. “If we do not begin to manage the situation, getting closer to the limits of the earth’s capacities will trigger unexpected and unpleasant regulations – like those of Covid – which will force us to change.

“We have to live less extravagantly, in smaller houses which are better insulated.

“We should use electric bikes and smaller cars. We have to decrease the amount of objects we have, or make them last longer.

“And we must be happy with less. I would rather ride a bike and keep my computer for 10 years, and remain free to move around, than face a global catastrophe which will wipe out most of our freedoms.”

Macron: Nuclear energy is the future for eco-friendly France

18th century château in southwest France up for auction from €90,000
17 June 2021
More from Opinion
More from Connexion
Get news, views and information from France
Join the newsletter
Subscribe to The Connexion