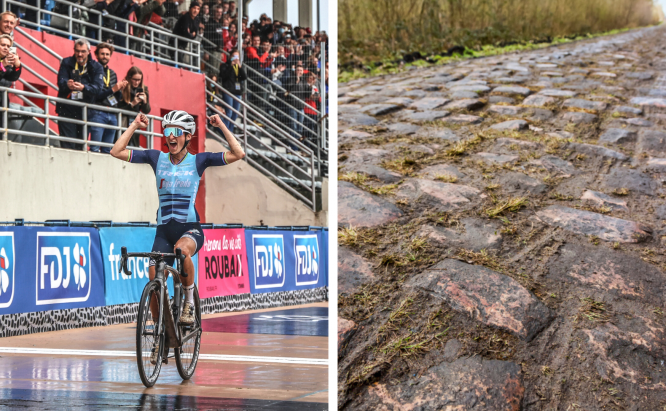 The Paris-Roubaix is known for its particularly tough sections of cobbled roads, which Lizzie managed to overcome Pic: Radu Razvan / Shutterstock / Fabien Boukla

British rider Elizabeth (Lizzie) Deignan has won the first edition of the women's Paris-Roubaix cycle race, having broken away from the rest of the peloton a full 82 kilometres away from the finish line.

The 32-year-old Trek-Segafredo cyclist finished first in the cycling race on Saturday, October 2, ahead of the favourite, Dutchwoman Marianne Vos, and the reigning world champion, Italian Elisa Longo Borghini.

QUEEN OF THE NORTH

Her victory comes 125 years after Josef Fischer won the first men’s Paris-Roubaix in 1896. Ms Deignan is also the first British rider to win the race.

This year was the first time women competed.

After her victory, Ms Deignan said: "I feel so incredibly proud - women's cycling is at a turning point and today is a part of history.

"I'm also proud to be part of a team making history, and even fans watching at home are making history to show there's an appetite for women's cycling – and that these athletes can do one of the hardest races in the world."

The women’s race was initially planned for 2020, but the event was cancelled due to the Covid-19 pandemic.

It was only yesterday, therefore, that riders faced the cobblestones of the ‘Enfer du Nord’ ('the Hell of the North’), the nickname given to Paris-Roubaix because of the difficulty of the route.

Before the race, on Thursday, September 30, Ms Vos told L’Equipe that women’s involvement in the race was significant.

She said: “If you're a fan and you love cycling, the Paris-Roubaix is fantastic, but now we feel like we're really part of it as a women's peloton. You can feel the excitement.

"It's great to be able to ride here, and it's obviously very useful to be here [in advance] to see the route and the cobblestones, to feel them and to prepare for them with the whole team. The cobbles are hard.”

The women’s Paris-Roubaix comes ahead of the Tour de France also opening to women next year.

The men’s 257km race is taking place today (Sunday, October 3), travelling 257km between Compiègne and Roubaix, including 55km of cobbles.

The men’s race is still much higher paid than the women’s; the victor of today’s male race will win prize money of €30,000.

After 20 years of sunny weather on race day, the Paris-Roubaix has suffered bad weather this weekend with rain and wind yesterday continuing into today.

David Lappartient, president of the International Cycling Union, told FranceInfo: "We are going to have a very uncertain Paris-Roubaix; I think I can say a historic Paris-Roubaix, because the conditions are going to be extreme.”

Several female riders did succumb to the conditions, including France's Eugenie Duval, who fell on the cobblestones.