Covid-19 in France: Should schools close to stop the spread? 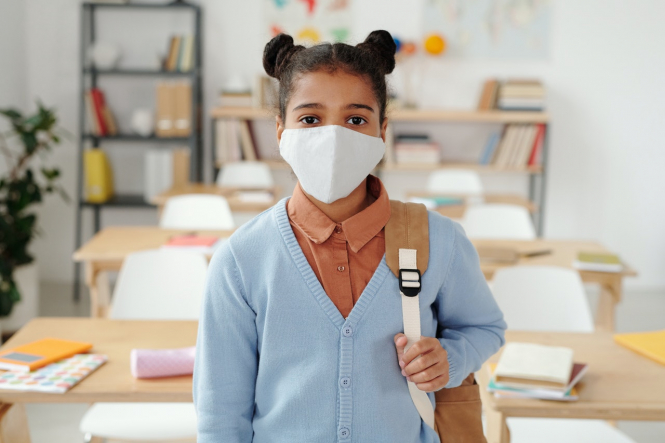 A debate has erupted in France over whether schools should close due to Covid-19 as figures show increased spread among children. Health experts say that schools should remain open.

The government is to meet today to discuss further measures to combat the virus, especially in light of the new UK variant spreading slowly but surely across the country.

Yet, while an extended curfew is expected to be announced tomorrow, health experts have called for schools to remain open.

Professor Jean-Francois Delfraissy, president of government advisory body Le Conseil Scientifique, told news service FranceInfo: “We recommend to continue with school openings...We do not think that UK data on the spread of the virus are clear enough to push us to close schools in France.”

The professor did say that rules around class closures should be tightened, especially if cases of the new variant are detected. Currently, classrooms must close if three or more cases of Covid-19 are confirmed among pupils.

As a result, questions are being asked about whether schools should in fact close. We explain.

Authorities have identified several factors that could explain this, including the effect of family gatherings over the Christmas and New Year period.

The current figures are the results of tests that were done during the New Year weekend and the first few days of school in January - so they are thought not due to the effects of school starting, but to the holidays that took place the week before.

The higher positivity level has also been linked to the increased contagion of the new UK variant.

Officially named VOC 202012/01, it is considered to be 50-75% more contagious than the previous strain, and there is some suggestion that it could spread more easily among children.

However scientists in the UK have said that the extent of the spread of the new variant among young people is still not completely certain, as data is still limited.

Similarly, the higher positivity level among young people could be because they are likely to be tested only if they have symptoms - in contrast to the wider public, who may get a test even if they are asymptomatic - which could also account for the higher percentage of positive tests among these age groups.

France is set to publish the results of a national inquiry into the new variant - and the possibility of it spreading throughout the country - this week.

What are specialists saying on the issue?

Professor Delfraissy has stopped short of recommending that schools close, but has called for more stringent measures within schools. Other medical experts appear to agree with him.

Professor Alain Fischer, paediatric immunologist and head of the government’s vaccination campaign, has said that closing schools should be a “last resort”.

He told news service France Inter: “If the figures go up, that could justify harsher measures - although this would be very regrettable. If, at a given moment, the spread of the virus among children is such that it is becoming really dangerous, we would have to resolve it. But it would not be done lightly.”

He said that closing schools “has quite dramatic consequences for children, especially sensitive children''. He said: “We saw this last spring. It’s a harm-benefit analysis.”

His view is also shared by other specialists.

Paediatrician Dr Georges Thiebault told newspaper Le Parisien: “We are all saying [closing schools] would be an error. It is very important that they are able to continue their education."

But epidemiologist Dr Antoine Flauhaut told newspaper Le Figaro in December: “School holidays represent a significant and powerful brake on [the spread of] respiratory viruses, and Covid-19 is not an exception. The question that schools play in the spread does deserve to be asked.”

What are other countries doing?

Several European countries have chosen to close their schools as a key measure to combat the virus.

These include Denmark, the Netherlands, Austria, the UK and Germany; with Chancellor Angela Merkel saying that “the measures we have decided are drastic”.

Professor Fischer defended France’s choice to keep schools open, saying that “the spread of the virus [in Germany and the UK] is higher than it is in France today”.

This is thought to be due to France’s decision to impose a second lockdown in autumn last year.

Yet France is still set to consider the results of a Swiss study, which showed that the country’s decision to close schools in the Spring of 2020 was one of the most effective measures in slowing the virus spread.

What options are being considered in France?

So far ministers appear to be reluctant to close schools completely, although the question is still likely to be debated at today’s Conseil de Defense meeting on Covid-19 measures.

A member of a parliamentary liaison committee, present at a meeting with Prime Minister Jean Castex with the heads of the Assemblée nationale and the Senate on Monday January 11, told France Info that “all hypotheses” are being considered, but that the government is still keen “to avoid a school lockdown at all costs”.

At his press conference last week, Mr Castex himself said: “The health situation must be very bad before we can envisage closing schools.”

National Education Minister Jean-Michel Blanquer has also said that the idea to prolong the February holidays is unlikely to happen, and he has so far rejected suggestions to postpone Baccalaureate exams that are scheduled for March.

However the 50% capacity rule currently in place in lycées is still expected to remain until at least January 20.

What other options are there?

The first step - before any school closures - is to see if the highly-contagious aspect of the new UK virus variant applies to children just as much as adults.

Health Minister Olivier Véran has said that this will be done via “an increased surveillance in schools”, with “testing operations” stepped up.

Mr Blanquer has also said that there will be “a million tests [available] in school settings” by this month.

Other suggestions have included the possible closure of school canteens, as children necessarily take off their masks to eat - although some critics have said this would not be practical.

Similarly, news sources BFMTV and Le Figaro have also suggested that school trips and sports lessons could also be postponed or cancelled, to avoid unnecessary spreading, or activities without masks.

But no such measures have yet been confirmed by the government.