Donkeys trialled as beach-cleaners at Pampelonne beach in Saint-Tropez 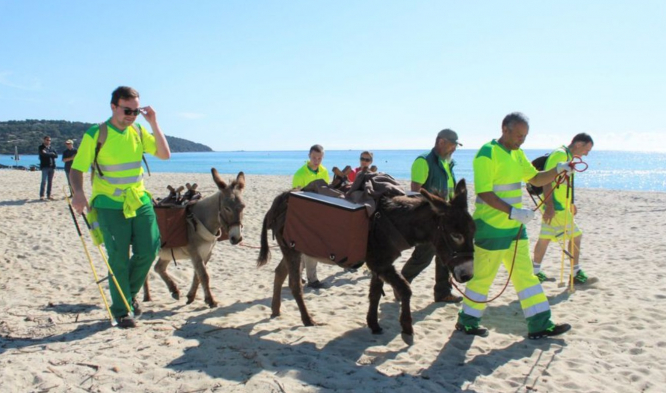 The donkeys walk up and down the beach with their handlers, picking up litter from the pristine sand Pic: Golfe Saint-Tropez / @GolfeStTropez / Twitter

Donkeys are helping to remove rubbish from a famous beach near Saint-Tropez as part of a trial by the local mayor, with almost 100 litres of cigarette stubs, plastic and other waste being picked up every day

The mayor of Ramatuelle, in Var, is trialling the deployment of donkeys on the five-kilometre Pampelonne beach, to help with picking up common rubbish.

Four donkeys – named Princesse, Malena, Justin, and Valentin – take it in turns to walk along the beach each morning, alongside ‘donkey handler’ Guillaume Olivier, who trained for 20 days in Corsica before starting the job.

He told 20 Minutes: “They are like four-legged 4x4s, and resistant to the heat.”

He added that the worst “plagues” on the beach are “cigarette butts, cotton buds and little bits of polystyrene”, which are either dropped by beach-goers or brought in by the sea.

Before the donkeys arrived, the beach was cleaned by two large ‘sieves’ pulled by a tractor. Now, only one of them is used and the donkeys do the rest.

The donkey-and-man team is deemed more effective than the mechanical method; humans and animals can be more selective, and distinguish between organic material that can stay on the beach, and artificial rubbish that needs to be picked up.

The team can also access spots on the beach that the mechanical sieves and tractors cannot reach.

The donkeys began work at the start of the season, and so far, their work has been met with approval.

The mayor said that he hopes that soon “the entire beach will be completely cleaned with help from animals”, while local manager of green spaces, Rémi, said that working with animals “has a different rhythm. You’re no longer with the machine, the mechanical work.

“Silence is calming and is more sociable.”

Ydelette and Jacques, two regular beach users, said: “We like the donkeys, every small thing counts.”

Yet, they also remarked on an occupational hazard of working with animals - their own droppings. They joked: “Well, they have to pick [the droppings] up after. I suppose it gives them more work to do!”

Pampleonne beach is the longest in the area, and often associated with A-listers, glamorous and exclusive beach clubs, and superyachts.

Brigitte Bardot filmed part of the 1956 And God Created Woman on the beach, which also helped propel it to fame, and some estimates now say that in normal (non-Covid) years, it can attract up to 3,000 people per day in high season.