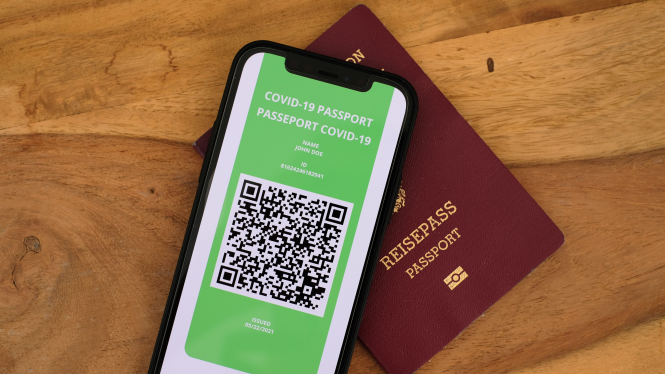 Work is continuing on a digital health pass in the EU, which is set to be ready by mid- to late-June Pic: Lukas / @lukassfr / Unsplash

People in France can start thinking about summer holidays in Europe on condition of being vaccinated, the EU has said, as its planned digital travel 'health pass' is on track for use from mid-June.

The plan is that a European-wide health pass will be launched at the same time across the EU, and countries that do not have the resources to put it in place will be supported by the Commission, to avoid delays.

The European Commissioner for the Internal Market, Thierry Breton, told BFMTV yesterday (April 18): “I seriously believe that we can start thinking about [summer travel], probably like last year in Europe.

He said that when it comes to “vaccination, the European Union is aiming for herd immunity by mid-July”.

Mr Breton said: “[When it comes to the] health pass, the Commission is working on digital options, which will be finished by mid-May. At the same time, we are working with member states to start the first tests [of the health pass] at the beginning of June, for a rollout in mid-June, late-June at the latest.”

There are fears that plans for a health pass could be delayed by different travel regulations in each member state.

In France, for example, the Conseil d'État will be consulted on the project.

But Mr Breton said: “These rules will be put forward by the Commission; will be voted for by the European Parliament in the next few days, and then by the member states so that the rules are imposed on everyone, so there is coordination [across countries], as speed is of the essence.”

The pass will be voluntary. It will show that the holder is immune to, or has tested negative for, Covid-19, either due to having had the illness already, through vaccination, or a very recent negative test.

Children will also be required to hold a pass, or be tested before travelling.

Support for a travel health pass appears high in France.

A recent study of nine countries by global travel reservation system GDS Amadeus found that only 19% of travellers in France would be totally unwilling to use a digital health pass for future trips.

The study asked 9,055 travellers in France, Spain, Germany, UK, India, UAE, Russia, Singapore, and the US. Of these, 91% overall said there would be at least some circumstances under which they would use them for future trips.

Almost two-thirds of French travellers (65%) would be happy to keep their health data in digital form during a trip if it allowed them to pass through an airport more quickly, with less face-to-face contact.

A similar percentage (64%) said they would be happy to store their details digitally if it meant they could travel to more destinations.

More than half (59%) said that they would be happy to use a digital health pass if it meant that they could start travelling earlier.

It comes as the French Covid-19 app TousAntiCovid is set to incorporate a section that will allow users to show a positive or negative result of a recent Covid test, and to show a proof of vaccination certificate, the government said yesterday.

A press statement said: “TousAntiCovid-Carnet, for which testing is beginning in the next few days, is aiming to digitally and securely store proof of a negative or positive test, and soon, certified proof of vaccination.

“From now, France is aiming to experiment with the functionality of TousAntiCovid-Carnet, during flights to Corsica or to overseas.”

The plan is then to extend the system to trips to the EU.

The TousAntiCovid app has been downloaded by 14.7 million people since June 2, 2020, and has so far notified 171,107 people of a possible risk of contact with Covid-19.

Covid-19: French company tasked with design of European health pass
EU Covid summer travel pass: What is it and who is eligible?
Air France and Ryanair trial digital passes for Covid travel

Driverless postal vehicles tested in Montpellier
3 December 2021
More from French news
More from Connexion
Get news, views and information from France
Join the newsletter
Subscribe to The Connexion