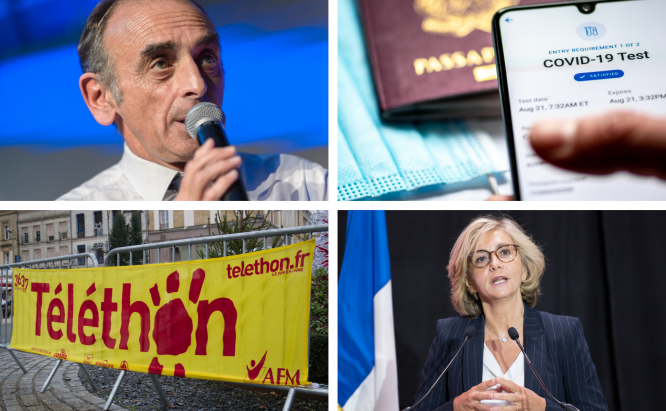 We round up the major events to take place in France over the weekend Pic: Obatala-photography / Frederic Legrand - COMEO / Michele Ursi / Collette Worley / Shutterstock

Far-right presidential candidate Eric Zemmour this weekend (Sunday 5) laid out his election pledges and his new “Reconquête (Reconquest)” party, at a campaign rally in Villepinte, Seine-Saint-Denis. Organisers put the attendees at 13,000; while Mr Zemmour himself counted 15,000.

He also shared the slogan, “impossible is not French”, and began the event by praising the “almost 15,000 French people who have braved the politically correct, the threats from the far-left, and the hatred of the media” to attend.

His policies and stances include a distrust of traditional media, a pledge to stop what he called the “Islamisation of France”, and a call for “immigration zero”.

Protesters picketed the event, and clashes erupted between attendees and groups including the SOS-Racisme association who attended wearing T-shirts saying ‘No to racism’. Journalists from the Quotidien show were also heckled (and evacuated for their safety and then allowed back in).

Five people were injured in the fray, including two who needed immediate medical attention.

Mr Zemmour himself injured his wrist after being grabbed by an attendee as he walked to the stage at the event. He has been signed off work for nine days and submitted a formal complaint, his spokesperson Antoine Diers said.

Former member of the gilets jaunes, Jacline Mouraud, also relinquished her presidential campaign to support Mr Zemmour. She said this was because “we owe everything to France, she is in danger, and we must defend her”.

Yet, Ms Mouraud is a controversial figure.

She has a visible social media presence against President Emmanuel Macron, but has also repeatedly made reference to “chemtrails”, a discredited conspiracy theory that alleges that the white trails left by planes are evidence of chemicals that governments are diffusing in secret.

She is also present in two YouTube videos in which she mentions ‘ectoplasm’, a technique that mediums say they use to contact the dead. She has also previously attempted to sell an ectoplasm course for €280, which included hypnosis seances as part of the programme.

He began the event by shouting “resistance, resistance”, and has repeatedly spoken of a “countryside parliament” idea to help get more people into politics.

He called his programme “urgent”, and said: “It’s not an easy or clear moment [for us politically], given the hold of the far-right and hard-right.”

He said: “We are here to give back courage to our country, which is plunged into the darkness of absurd debates on matters of religion or skin colour. No, France is not far right. France is social security, public health, emancipation, schools, research, sharing.”

The Les Républicains party (right-wing) have chosen Valérie Pécresse, current president of the Regional Council of Île-de-France, in the primary run-off to represent them in next year’s presidential election.

The party’s choice was announced by leader Christian Jacob.

Ms Pécresse has aimed to present herself as the moderate choice, in contrast to runner-up Éric Ciotti, who she had painted as more of an extreme candidate.

Yet, some of her pledged measures on immigration and crime may be seen as further right to some. These include harsher measures on crime, halving the number of residence permits for non-EU migrants, and banning Muslim women from wearing headscarves while accompanying children on school trips.

Ms Pécresse has famously summarised herself as “two-thirds Merkel and one-third Thatcher”, and criticised President Emmanuel Macron for a “five-year term for almost nothing”. She has also said that Britain must “suffer” due to Brexit, and that she wants to see a “stronger, braver EU”.

This year’s Téléthon 2021, which was launched on December 3, raised almost €74million.

The event raises money for research into rare illnesses.

The number of pledges during the event this year, which was in its 35th year, is close to the number received during the 2019 event, which hit €74.6million promises, and eventually raised €87million in total.

4. Start of tests of non-EU arrivals in France

All travellers to France, including fully vaccinated people, coming from non-EU countries such as the UK are now required to show a negative Covid test taken within 48 hours of departure.

The official rules state that: “Anyone aged 12 or over wishing to enter national territory from a country [outside the EU] must come with the result of a test carried out less than 48 hours before their departure.

“The only antigen tests which can be taken are those which allow for the detection of the SARS-CoV-2 N protein," the rules state.

This will include rapid antigen (lateral flow) tests that are offered in the UK, as well as PCR tests, travel companies have now confirmed.

The new travel rules apply to all travellers, vaccinated or not, and including French citizens and/or residents.

French farmer, writer, philosopher and environmentalist Pierre Rabhi has died at the age of 83. He died on Saturday, November 4, from a cerebral haemorrhage, his family confirmed to AFP.

He will be remembered as one of the pioneers of ‘agroecology’, which aims to regenerate the natural environment by excluding pesticides and chemical fertilisers.

On the subject of his book, Vers la sobriété heureuse (published as The Power of Restraint in English), he explained: “One-fifth of our world, of which I am a part, uses four-fifths of the world’s resources. I cannot morally accept that situation.

“To change that we need to adopt more modest lifestyles. In our society, we have more than enough to eat, but even then we are not happy.”

But despite being praised and remembered positively by some, Mr Rabhi was not without controversy. He was notably criticised for his stance against gay marriage, women’s rights, and fertility treatments for everyone.

He called gay marriage “a new idea” and “theories” that could not “change reality”, and dubbed gay parenting “not normal” and “against natural procreation”.

In a reply to Ms Hidalgo’s tweet, one Twitter user, Maxime, wrote: "Pierre Rabhi was a homophobic thinker who considered homosexuals and homo-parental families as abnormal, not to mention that for him the main function of women was a reproductive function...”