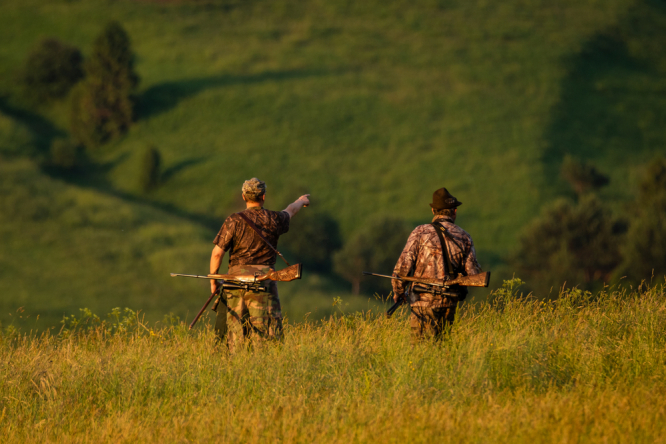 It is legal to hunt 90 different species of animal in France Pic: Mike Mareen / Shutterstock

France’s hunting season began on Sunday (September 12) in several departments around the country.

Hunting season begins at different times in different departments in France. The season will last until February, with the exact closing date different dependent on the department.

You can check when the hunting season begins and ends in your area on the French National Hunting Federation's (Fédération Nationale des Chasseurs, FACE) website here.

It is legal to hunt 90 different species of animal in France, although there are restrictions involved.

There are rules in place, at either national or local level, which limit the number of animals of a specific species that can be hunted in any one season. For example, red deer numbers are subject to national rules, while hares, pheasant or grey partridges are subject to local-level rules decided by the prefecture.

Hunting has a long history in France and has also sparked many debates, with supporters claiming it is traditional and detractors calling it cruel.

Here we provide five facts about the practice.

1. France has the most hunters in Europe

There are 1,313,000 hunters in France according to the Fédération nationale des chasseurs. It is the country’s third most popular sport, after football and fishing.

Anyone wishing to hunt in France requires a licence, either national or departmental, and must undergo a test to get one.

Licences are valid for life but must be validated every year before the beginning of hunting season.

In recent decades, the number of official hunters in France has been dropping. In 1976 there were 2,219,051 registered hunters when the population of France was around 54 million people. Today the population is around 67 million.

Despite this, France still has more hunters than any other country in Europe, according to a 2010 study by the Federation of Associations for Hunting and Conservation of the EU.

This is supported by Thierry Coste, political adviser for the Fédération nationale des chasseurs, who claimed the same in an interview with Connexion.

2. The majority of hunters in France are men over 45 years old

Only 2.5% of of hunters in France are women, but a women’s hunting association and a popular influencer are trying to change that

"The fact that women are in the minority in what for years has been a man's hobby does not mean that they do not have a place in it, quite the contrary," the Fédération nationale des chasseurs states on its website.

23-year-old Jessica Héraud founded a hunting federation in Charente-Maritime in 2019. The federation is called Les Dianes, in reference to Apollo's sister and the Roman goddess of hunting.

Another 23-year-old French woman Johanna Clermont has also become a social media sensation for her pro-hunting views. She has 151,000 followers on Instagram and has been the subject of many media articles.

On her website she writes: “Hunting is more than just a hobby, it’s a way of living, thinking, and conceiving life. Hunting is my lifestyle.”

3. Landowners must apply to deny hunters the right to go on their land

French law covering ecology and rural life - le Code de l’environnement - means that no one has the right to hunt on the property of others without the consent of the owner.

However, often hunting is carried out on land by default and it is up to the landowners to take action to prevent it, on the grounds of moral objection.

If you own land and wish to put in place a hunting ban, the steps to take depend on which body has jurisdiction over la chasse in your area.

It is either covered by a société de chasse, which is a simple association (‘club’), or, in other parts of France, hunting is managed by an organisation approved by the prefecture, called an ACCA (association communale de chasse agrée) or AICA.

You can check with your local mairie for more information on this.

If you own land in a hunting area and wish to deny hunters the right to hunt on your property, read our article about how to stop hunting on your land in France.

The total number of accidents last year related to hunting was 141, up from 131 the previous year. Despite the increase, the number of accidents each year is on a downward trend, statistics from the Office National de la Chasse et de la Faune Sauvage (ONCFS) show.

90% of accidents happened to hunters themselves.

Eleven people died last year due to hunting. This is an increase from 2019 when 7 people died.

In December, a 25-year-old man was shot dead while cutting wood 100m from his home in Lot.

“The vast majority of fatal accidents are still linked to a failure to comply with basic safety rules and in particular a failure to observe the 30-degree safety angle, shooting without identification or improper handling of the weapon,” the ONCFS stated in a press release.

Hunters should follow a number of safety protocols. One of which is not shooting at an angle of 30 degrees to the left or right, limiting shooting to a 120-degree arc directly in front of you.

In 68 departments of France, it is mandatory for hunters to wear a high-visibility item of clothing (either a harness, armband, hat or jacket). In the 22 other departments where hunting is practiced this is simply recommended.

Hunters are forbidden to shoot in the direction of roads, paths or public places. They also must put up signs to warn the public when they are hunting.

5. France was the last EU country to ban glue traps for birds

France outlawed glue trap hunting in June 2021 after European courts ruled that laws allowing the practice in France should be changed, as it had been illegal in the EU since 2009.

The practice was legal in only five departments in France: Alpes-de-Haute-Provence, Alpes-Maritimes, Bouches-du-Rhône, Var and Vaucluse.

Glue hunting involves coating tree branches with glue to trap birds, which are then captured and caged to attract others for the hunters.

Environmental protection group the Ligue pour la Protection des Oiseaux tweeted after the decision: “France has finally decided to respect European law and ban glue hunting, a cruel and non-selective practice that the LPO has been fighting against for years.”

“Hunters cannot understand why this practice is being sacrificed in the name of a "green" political display, with no real basis for who really cares about the biodiversity within territories, as we do on a daily basis! A whole section of French and rural culture is in the process of disappearing.”

More on hunting in France