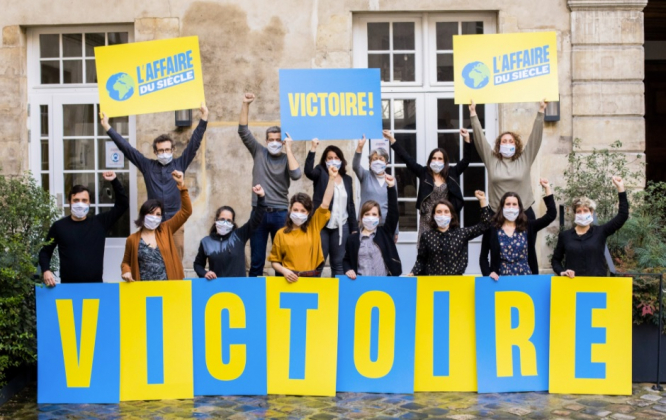 The NGOs claimed victory this week and celebrated: "We won!"
By Hannah Thompson

France has been ordered to pay one euro to four eco associations in symbolic compensation for the “moral damage” caused by the state’s “inaction on climate change”.

The Paris administrative court ordered the payments on February 3, after it found that the state had not kept its promises on the reduction of greenhouse gases.

One euro each will be paid in “moral compensation” to La Fondation Nicolas Hulot, Greenpeace, Oxfam and the Notre Affaire à Tous association, who took the state to court for “climate change inaction”.

The judgement said: “The state must be held responsible for the commitments it did not respect under the first carbon budget.”

Climate change campaigners have called the case the “affair of the century”, and Greenpeace France has welcomed the ruling as “good news”, saying that “the state’s inaction on climate change has been judged as illegal”.

High-profile figures - including the Oscar-winning actresses Juliette Binoche and Marion Cotillard - said in a video: “With this ‘Affaire du Siecle’, we have, together, condemned the state for its climate change inaction…[and achieved] an historic and unparalleled victory for you and the planet”.

Greenpeace also explained that it took action because based on current data, France has “no chance” of reaching carbon neutrality by 2050, and that its promises are “never followed by action”, it said.

Congrats @NotreAffaire for winning a landmark court case against the French government!
⚖️The court acknowledged the French state's responsibility in the climate crisis and its lack of climate action.
Historic win for climate justice! https://t.co/YSQzG5MWGV

The court has given the state two months of reprieve to give it a chance to take definitive measures against global warming. The court will now await comments from relevant ministers before it will decide whether to force the state to take more measures to reach France’s climate objectives.

In a statement after the ruling, the government said that it was “acting” on the court’s decision, and said that it was still “totally engaged in the fight against the climate change challenge, and was leaving no-one behind in this necessary transition”.

It has denied the claims made by the NGOs, saying that it has “respected the Paris Agreement”.

The case is the largest of its kind on climate change in France. It began just over two years ago, with a public petition that has now gathered more than 2.3 million signatures - and reached one million just 36 hours after it launched on December 18, 2018.

Heatwaves 'will radically change the landscape of France’