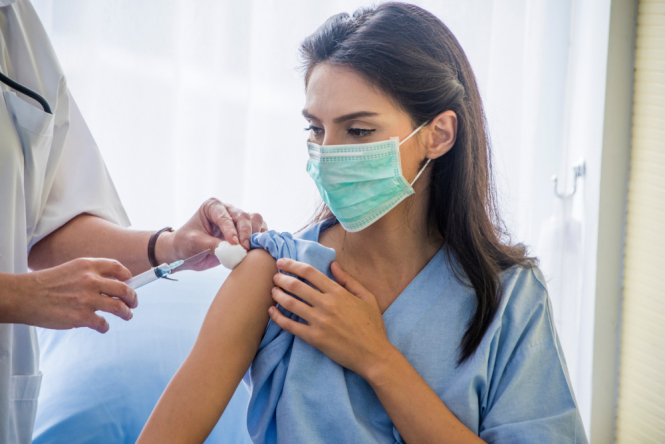 Healthcare workers in France have been called to strike from August 4, in protest against plans for mandatory vaccination, as a new study shows 40% of the population has some sympathy with protesters.

The government has made it obligatory for healthcare workers in 70 professions - equivalent to 1.5million people - to be vaccinated by September 15, on pain of being suspended without pay.

Now, hospital union SUD Santé Sociaux has called on its members to strike in opposition to the rule. The union, which is not the largest in the sector, represents about 10% of workers.

General secretary Jean-Marc Devauchelle said that the rule "is once again putting the blame for the resurgence of contaminations and deaths from Covid-19 in hospitals on healthcare staff”.

‘Not anti-vaxx but pro-free choice’

Mr Devauchelle explained that the union is not anti-vaxx, but is “with those who protest against the health pass and compulsory vaccination”.

He said: “We are not against vaccination, but it must remain a free choice. For my part, I decided to get vaccinated last Monday and I waited for a long time. But it's a personal choice, I'm not forcing anyone, and our union doesn't want to impose [the choice] either.

"We are always reluctant when we don't know about a particular product. We know full well that any injection carries risk and we don't have enough hindsight as we might have in the case of taking a [painkiller] Doliprane, or other vaccines.”

He said that making vaccination mandatory for healthcare staff would also “surely” have a negative impact on worker morale and could cause more staff to leave their jobs.

He said: “We’re waiting to see if it will be small or if the impact will be large. I can’t say whether there will be another haemorrhaging [of staff] as there has been over the past few months.”

The strike is called to begin on August 4, one day before a decision is expected from the legislative court le Conseil constitutionnel, on whether the extension of the health pass rules is constitutional.

Lawyer Arnaud Durand explained to FranceInfo that the citizens’ request was aiming to “put real, legitimate pressure on the Conseil constitutionnel. Either we win, or a real legal war will begin.”

The group of citizens working with the lawyers are planning a “massive instruction” of all French courts if the Conseil constitutionnel consultation does not go as they wish.

Lawyer and spokesperson for the citizens’ collective, Jade Dousselin, told FranceInfo that the rules “encroach on the freedom to come and go” and that there will be legal “consequences” on the “right to work”.

He said: “There is no way we will [allow] the suppression of the salary of healthcare workers who don’t get vaccinated with a product that has no definitive authorisation on the market.”

He also criticised the government’s voting through of the rules, saying that there were “big problems” inherent in MPs’ creation of “1,800 amendments in 48 hours”.

The move is also supported by an online petition, which has so far reached 200,000 signatures, calling for more transparency and clarity over the terms of the vaccine use.

The petition is calling for a “friendly request to see the communication documents” and files containing the authorisation decisions that put the vaccines on the market. If the petition reaches 250,000 signatures, organisers say that they will also mount legal action.

The “not anti-vaxx, pro-free choice” message recalls that shared by some of the protesters present at the marches against the vaccines and health pass that have taken place over the past three weekends.

More than 200,000 people marched at protests across France on Saturday July 31, with a range of views on display.

While some were far-right “anti-vaxxers”, others were more to the left of the political spectrum, including Jean-Luc Mélenchon, leader of La France Insoumise party. Other protesters were vaccinated themselves, but were calling for the freedom for all to choose whether or not to get the jab.

A recent study from Harris Interactive pour TF1/LCI found that 51% of the population has some sympathy with the protest movement.

The poll* found that:

Antoine Bristielle, director of the research and opinion bureau l’Observatoire de l’opinion of the Fondation Jean-Jaurès, yesterday told France Inter that opinions within those who support it are varied.

He said: “There are people who are anti-vaxx, but there are others who are clearly protesting against the health pass, or for freedom, and against the fact that this is something being imposed from on high by the government.

“This explains the support for the movement in public opinion, which is at around 40%, even though only 17% of the population are now refusing to be vaccinated.”

He said that the statistics suggest that there has been “a break in confidence, not so much on the measures that have been taken, but more on the way they have been taken”.

The researcher said that establishing “participatory democracy” would be a way to “restore confidence between the people and the elites”.

He explained that many opponents to the health pass are “people who are relatively young; there is overrepresentation among 25-34-year-olds, who consider themselves to be the most impacted by the health pass, even though they are, in theory, less likely to benefit from vaccination.

“We are also seeing people who are abstaining, or people close to La France Insoumise or [far-right party] le Rassemblement national, so people who are generally pretty defiant towards political institutions.”

Mr Bristielle drew comparisons with the gilets jaunes protest movement from before the pandemic.

He said: “The more people supported the gilets jaunes movement, the more they are in favour of protests against the health pass. This new movement again says something about the way in which French society considers institutions.”

Overall, there is a “feeling of distrust towards these institutions, which take extremely strong decisions”.

*The poll was online from July 27-29, and asked a representative sample of the French population of 1,044 people, aged 18 and over.