How will the French react to the new Covid health pass? 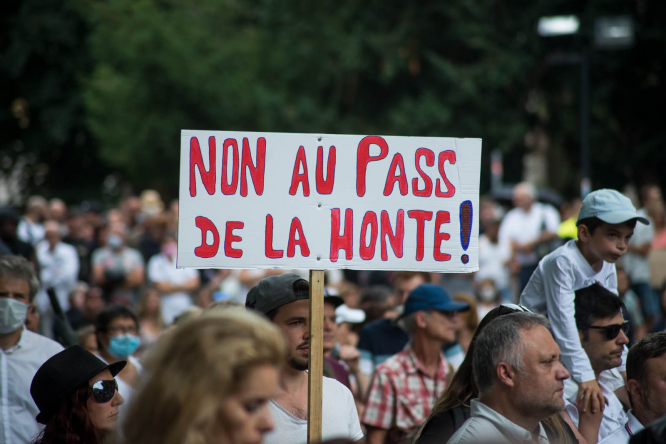 'There are doubtless some concerned about civil liberties but most seem to have been caught up in fevered speculation about ulterior motives and conspiracist thinking' says Sociologist Jean Viard Pic: NeydtStock / Shutterstock

By Rory Mulholland and Liv Rowland

The unprecedented move sparked protests, with 161,000 taking part on July 24 and 114,000 the previous week, amid claims of dictatorship and fears of a divided society.

Several vaccination centres have been vandalised, with tags such as “vaccine genocide”, and two were set on fire. Commentators predict, however, that most will accept the law – voted through at speed – although a minority will continue to oppose it.

France’s Rights Defender has questioned whether the rules are disproportionate, particularly for children and the poor. The rules will apply to those aged 12-17 from September 30.

The health pass – pass sanitaire – is not a separate document but simply proof of Covid status: fully vaccinated, a negative test, or having had Covid recently and seen as immune.

This can be shown digitally or via paper certificates with QR codes which are scanned on entry.

It will be required from early August, including for foreign tourists, to visit a cafe or restaurant, or take a long-distance train.

It was put in place in late July for museums and other cultural and leisure facilities. Anyone found there without a pass faces a €135 fine. The precise date for the new rules to start is to be confirmed by the Conseil constitutionnel on August 5.

The move is aimed at incentivising vaccination to stem a fourth Covid wave caused by the Delta variant. For the non-vaccinated, the only way to visit a cafe if you have not had Covid will be by presenting a recent PCR or antigen test, which will cost up to €43 and €25 from the autumn.

There has been a surge in fake vaccine certificates on sale and 6,000 firms are listed online as saying they will not ask the public for the pass.

Political opposition comes from both extremes. However, almost 60% of the population has now had at least one jab. Research indicates a geographical divide, with more take-up in the north and west.

New Covid cases stand at 16,167 (July 25) but the hospital situation is stable and deaths low.

Andrew Smith, lecturer in French history and politics at the University of Chichester, said: “The protests are probably good for Macron. It allows him to present himself as a sensible option and sideline parties on the extremes.

“There are doubtless some concerned about civil liberties but most seem to have been caught up in fevered speculation about ulterior motives and conspiracist thinking.” Sociologist Jean Viard, a research director at CNRS, said: “For the last few years, each time there’s a new restriction, people moan, then everyone follows the rules.

“It’s true the reaction is a bit stronger than usual, but we are also entering the presidential campaigns and the far left and right are trying to make political capital out of it. In MPs’ debates they didn’t achieve much and the measures were mostly voted as planned.

“There may be skirmishes, and some incidents might turn violent, but the difference with the gilets jaunes is that more than 60% of the public supported them, partly because Macron had annoyed a lot of people. Now he’s much more popular and most of the population is vaccinated.”

Reactions are not entirely predictable, he added – for example, some might join protests because they are depressed and want excitement.

'There could be some horrible scenes, but I think it will only happen from time to time'

“Macron doesn’t have all the answers, but it’s his job to do something. There are a gigantic number of unknowns.

“At the end of the day, people want the ship to have a captain, even if he’s not quite sure where we’re going.

“People are afraid for themselves, their children and parents – fear is the biggest feeling, not loss of liberty. At the same time, there are real questions to be asked about how we will later go back to a society that is not under surveillance.”

Laure Millet, head of the healthcare policy programme at think tank Institut Montaigne, said: “There is a lot of debate around freedom: on the one hand, the freedom of those who are vaccinated not to have to face new freedom-killing measures such as curfews and isolation, while others see the health pass and obligation to be vaccinated as freedom-killing.

“It raises questions as to what is freedom? Is it getting vaccinated so as to be free afterwards, or is it leaving people free to be vaccinated or not?

“It’s a strong social issue right now, especially as we are ahead of the rest of Europe with these obligations, although Italy is considering similar rules.”

She added: “Last year, it was not the same – without a vaccine, there was no idea of a measure that would apply to some people differently.

“However, Mr Macron doesn’t want to have to shut restaurants and shops and halt the economy again now we have an effective solution, at least against the serious forms of Covid, that allows hospitals to keep functioning normally.”

Ms Millet said it is unheard of to have such a policy in France affecting all the population, although obligatory vaccination for some diseases in certain hospital healthcare professions already exists.

The difference is that those vaccines have been in use for many years, whereas some argue the Covid vaccine has not been tested enough.

At the start of the vaccine campaign, around 50% of people surveyed were opposed to being vaccinated but that proportion has now greatly dropped.

There was also a strong spike in people registering for jabs after Mr Macron announced the new plans on July 12. There is a hardcore of antivaxxers who will never get vaccinated, Ms Millet said.

Many others were just hesitant and are now more convinced. Having seen death or severe Covid illness among friends and family, or not, also plays a role in people’s attitudes. It is hard to predict the level of continuing opposition.

It might quieten over the summer, but see a resurgence at the rentrée, she said.

It is hard to compare with the gilets jaunes whose demands became very broad, whereas this issue is specific, but “I am sure Mr Macron does have the spectre of the gilets jaunes in mind and is no doubt very scared of that”.

Covid 4th wave France: Check mask-wearing and other rules in your area