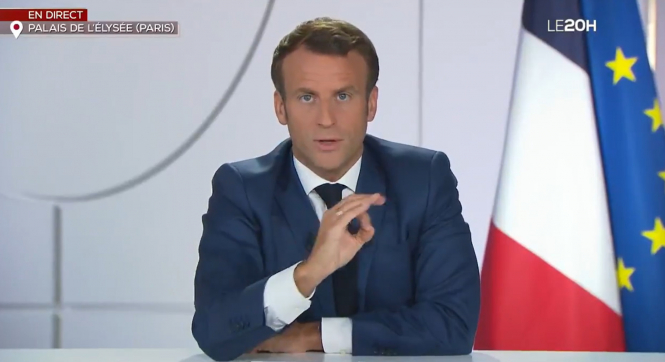 Mr Macron spoke on TV channel TF1 at 20h on Tuesday July 21, about the historic agreement, which came into effect overnight from July 21-22.

He said: “I want our citizens to acknowledge what happened over these four days and four nights. This is the fruit of historic work over three years between France and Germany...It is the most important moment for Europe since the creation of the euro.

“It is the fruit of our work, and we can be proud of it.”

The plan, which was agreed by all EU states, will unblock €750 billion to help EU member states to recover their economy following the Covid-19 crisis. This includes €390 billion in grants allocated to states that have been hit the hardest. These grants will be reimbursed by the 27 nation states.

Another €390 billion will be given in loans, which will be paid back by the recipient countries individually.

President Macron said: “We [France] will see €40 billion in this plan. We are going to construct our kickstart plan with the will to finance youth employment, our small and medium-size businesses, artisans, shopkeepers, tourism, and thermal renovation of our buildings.

“What we have voted for will touch the lives of our citizens. Our negotiations have allowed us to protect farmers’ revenue for seven years. This budget will also allow us to finance our regions, especially our more remote coastal regions.”

French economy minister Bruno Le Maire told news service FranceInfo: “We are going to be able to start spending money as early as 2020, for example on the energy renovation of buildings [and] on the hydrogen plan, which can be financed by this European money.

"The French state will pay immediately for 2020, but from 2021, the European Union will reimburse us.”

Mr Macron called it a “historic change for our Europe and the eurozone”, and a “major step that has been taken”, while Ms Merkel said she was “very relieved” to have come to an agreement after difficult negotiations. It proves that Europeans can “still work together”, she said.

The creation of “communal” debt across all EU states is a first for the bloc. It is based on a Franco-German proposal, but saw much opposition from the so-called “frugal” countries, including the Netherlands, Austria, Denmark, and Sweden.

To overcome this, Council president Mr Michel reduced the grant amount from the originally-proposed €500 billion to the current amount of €390 billion.