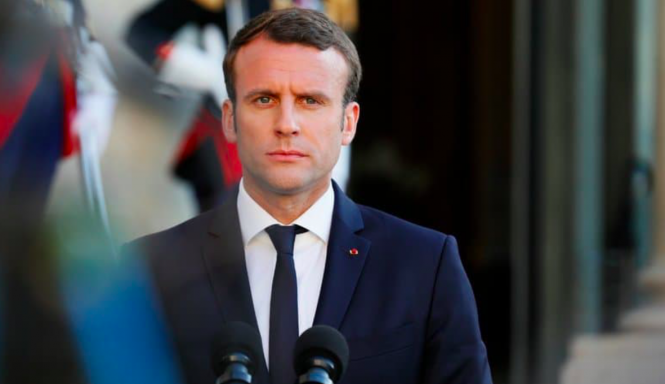 During the meeting, the President said it was time for “fear to change sides” in response to the murder of Samuel Paty, a history and geography teacher, by an Islamic extremist in Paris on Friday, October 16.

Anti-terrorism prosecutor Jean-Francois Ricard attended the meeting along with senior government ministers and the President.

Mr Paty was beheaded in the street outside his school after showing controversial cartoons of the Islamic prophet Muhammad to students, during a lesson about freedom of expression.

He had warned students before showing the images, and given them the option of leaving the classroom if they did not wish to see them.

Read more: Paris teacher killing: What we know about attack

However, many parents of students at the school were upset that Mr Paty used the images, originally published in satirical magazine Charlie Hebdo. One parent came to the school to speak to the headteacher about the incident, accompanied by another adult who has since been found to have links to radical Islamist networks.

Macron has asked the Interior Minister Gérald Darmanin to reinforce security in schools by the time students return to class after the Toussaint holidays on November 1.

Police investigations into the murder are just beginning, but they have already managed to retrace the steps of the suspected killer - Abdoullakh Abouyezidevitch Anzonov, an 18-year-old of Chechen Russian origin, whose family are based in Évreux, Normandy. Mr. Anzonov was not known to the police before this incident.

The police are also investigating 80 people who have shared messages justifying or celebrating the teacher’s death online. A source told news outlet BFMTV: “These messages will lead to police action in places where people who sent the messages live by Monday (October 19).”

Minister for Citizenship Marlène Schiappa will meet with bosses of social media platforms tomorrow to discuss measures to fight against the spread of terrorist messages online.

New laws to enforce secularism and “consolidate Republican principles” will be presented on December 9. This comes 115 years after the original law separating state and religion in France was enacted.

The Elysée has also confirmed that from next week Mr Darmanin and Minister of Justice Eric Dupond-Moretti will work to implement a plan of action against “structures, associations, and people close to radicalised networks”. Until a new law against Islamic terrorism is passed, “appropriate measures” will be taken against such associations.

The President will also make a “counter-speech” against radicalised propaganda in France.