Military parade but less fireworks: How France is celebrating July 14 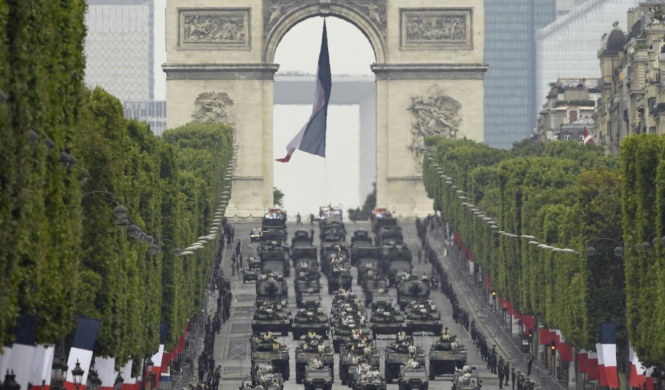 France is celebrating today’s fête nationale (July 14) with a traditional military parade on the theme of “Winning the future”, one year after the celebration was dramatically scaled back due to Covid-19.

Around 5,000 participants are taking part in the parade along the Champs-Elysées, including 4,300 on foot, 73 planes, 24 helicopters, 221 vehicles, and 200 horses from la Garde républicaine.

Of the 73 planes, 54 will represent the air force, 12 the national marines, three the sécurité civile, and four the general director of arms.

Among the troops being honoured is the Takuba, a special European force started by France – and now supported by eight member states – to fight alongside Malian troops.

A total of 76 ‘everyday heroes’ will also be honoured in the parade; gendarmerie who have shown exceptional bravery and duty during their work in the past year.

The Elysée said they were being honoured as they “embody devotion of service to the population”, and should be recognised for their “daily, discreet but concrete heroism”.

One of them, Nina, spoke to BFMTV about the acknowledgement. She took part in the Thierry Dupin case at the end of May.

Mr Dupin, age 29, hid out in a forest overnight in the Dordogne between May 30 and 31, armed, after having broken into his ex-partner’s house and attempting to shoot her new partner.

Police attended the scene and were caught in an overnight stakeout of the forest. Mr Dupin, a former military man, was known to police, as he had four prior convictions for domestic violence.

Nina told BFMTV: “We knew the address. We knew this individual had past convictions. We also knew his military past.”

She said that during the incident, she had been acutely aware of another domestic violence case several months earlier, when three gendarmes lost their lives in Puy-de-Dôme.

She said: “Of course, you think about it. But your duty is to act. You have to be clear-headed and determined. That’s what we are trained for.”

Mr Dupin was eventually arrested after having been injured in the stand-off with gendarmes.

Commenting on her role in the case, Nina said: “It’s nice to be recognised, but I don’t think I’m a hero. I am a gendarme and I was just doing my duty.”

Two YouTubers, McFly and Carlito, will be two unlikely participants in the show by la Patrouille de France (the French equivalent of the UK Red Arrows).

They were both received at the Elysée in May, and had also been set to appear in an image behind a speech by President Macron, but it is not yet certain whether this will happen.

La Patrouille de France traditionally opens the parade each year, and uses coloured smoke to draw the French tricolour flag in the sky.

The planes will also have the image of le Petit Prince, the famous character in the children’s book of the same name by pilot Antoine de Saint-Exupéry, to celebrate 75 years since the book’s publication.

The musical finale will include a choir of 120 young people from military lycées, civic service, voluntary military services, and volunteer firefighter services.

The event began at 10:00, and more than 25,000 people are expected to attend to watch the celebrations over the course of the day.

The standing public is limited to a capacity equating to one person per 4m2.

Attendees over the age of 12 are required to show a 'pass sanitaire', which shows proof of a recent negative test, a full vaccination certificate, or proof of having recovered from Covid within the past six months. They are also required to wear a mask throughout the event.

The Paris prefecture said: “Anyone who does not respect these health measures will be banned from accessing the area.”

As well as the parade, visitors are today able to see an exhibition of military aircraft at Les Invalides, and a presentation of armed forces equipment across several arrondissements in the city.

Paris has put a ‘protection perimeter’ in place to secure the area, which began at 06:30 this morning and will remain in place until 14:00. The area includes the Champs-Élysées, Concorde, and the Assemblée Nationale.

Driving access to these zones is now limited until 14:00, and all vehicles will be banned from the central area.

Around 20 bus routes are also on diversion during the event.

No fireworks, no fun?

Despite the Paris celebrations, a number of mairies across France have chosen to cancel their July 14 events due to rising cases of the Delta variant of Covid-19.

Roubaix, northeast of Lille, had planned to light up its hôtel de Ville, but this will not go ahead, in a bid to prevent people from gathering in the area.

In the Nord, the prefect has cancelled all shows and firework displays in the Lille and Val-de-Sambre areas. Celebrations in Nancy, Nantes, Limoges, Carcassonne, Le Havre, La Roche-sur-Yonne, and Brest have also been cancelled or scaled-down.

The mayor of Limoges said: “The decision was taken to not put the population at risk, especially within the context of this uncertainty.”

But Philippe, a fireworks specialist in Roubaix, told BFMTV: “I don’t understand this decision. Nightclubs have reopened, restaurants are full to bursting, and we do our job outside and we’re not allowed to do it.”

In Carcassonne, where half a million spectators usually gather to watch the July 14 fireworks, the decision was taken to cancel the show rather than try to control such a large number of people.

Some cities, such as Toulouse, have chosen to split their events in a bid to reduce crowds from gathering in a single spot. The Occitanie city is putting on four simultaneous firework shows as a result.

In Paris, the fireworks from the Tour Eiffel will go ahead as usual.

Celebrating the Bastille and unity

La fête nationale is the official term for what is known in English as ‘Bastille Day’. It is celebrated in France and French-speaking countries in commemoration of ‘the storming of the Bastille’, a major event of the 1789 French Revolution.

It also celebrates the ‘Fête de la Fédération’, which celebrated the unity of the French people on July 14, 1790.

The day is also celebrated in French-speaking areas, and places with a large French population, across the world.

La Fête Nationale: 14 facts to know about le quatorze juillet
Fête Nationale military parade to go ahead in Paris if Covid allows
2020: What will France's July 14 celebrations look like this year?