I was turned down for health pass as service so slow I’d left France! 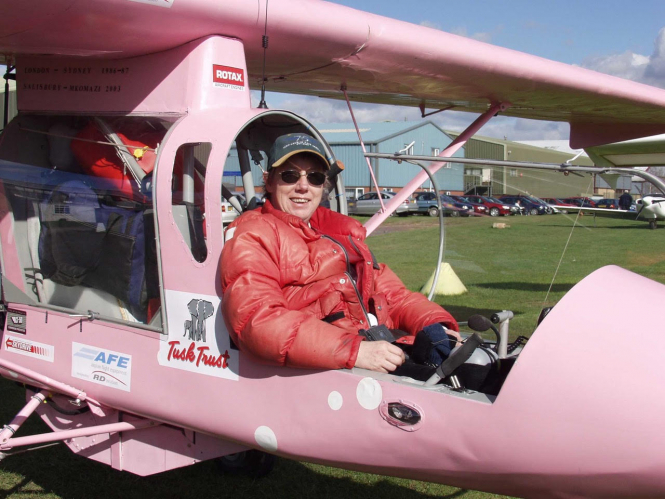 A non-EU tourist waited 20 days to hear back from the French government service which provides vaccination QR codes for French health passes - to be told her request had been refused as she had already left the country.

Eve Jackson was travelling from Tanzania to visit her brother Anthony, who lives in the village of Masseube in the Gers.

It was the first time that the pair had seen each other since Mr Jackson moved to France in May 2019.

Before undertaking her four-flight-long journey from Tanzania, she had emailed her vaccination documents to the French government service charged with converting the certificates into a QR code that could be scanned onto the TousAntiCovid app and shown in places requiring a health pass.

However, during a stop-off on her way to France, Ms Jackson  – who is a Guinness World Record holder and was awarded the Segrave Trophy in 1987 for flying solo from London to Sydney in a microlight Shadow – received a message telling her to upload her details to the new online portal which allows tourists to request their code without going through an intermediary.

After completing this process, she was told that she would receive her QR code in nine days’ time.

“While not ideal, [this meant that] we’d be able to go to places for the last few days of her visit,” said Mr Jackson.

“Eve checked [the portal] daily, and after a week or so the story changed to 15 days, at which point it was a complete waste of time because it would only have given us the Saturday before she left.

“Going out and eating in restaurants was going to be a big part of the visit for us because it also means that you can go travelling round because you do not need to get back to make some food.”

Eventually, “she got –  and paid for – a test at a pharmacy here [in France], so we were able to eat one restaurant meal together in the open space beneath the mairie in my village.”

Then, as Ms Jackson returned to her home in Tanzania and nearly three weeks after she first submitted her QR code application, she was finally notified by the service that her request had been refused.

The message stated that: “Your stay in France having ended, we regret to inform you that we will not answer your request. We invited you to repeat it during your next stay.

“We apologise for not being able to do your request on time.”

“Their invitation to do it again ‘during your next stay’ is rather insulting, I feel,” said Mr Jackson. “If we know they can’t get their stuff together in a fortnight then the only hope is to start the process ahead of time – which Eve did, but evidently not long enough in advance!”

Mr Jackson added that: “It was still good to see my sister after two years and we had lots to catch up on,” but described the QR code conversion system as “daft.

“I would have imagined that as France gets its tourism industry going again this would have been a high priority.

“It seems such a blatantly silly thing, which has affected other people more than us because at least she could stay here with me.”

The Connexion has repeatedly approached the French Foreign Ministry for further details on the average wait for QR codes and to determine whether there are any plans to adapt the current system to speed up the process.

The only response received so far was an invitation to “consult the webpage dedicated to health pass requests on France Diplomatie.”

This website states that: “We are receiving a lot of applications. We are processing them as quickly as possible. There is no need to contact us to check on progress, as this may delay the process.

“In certain cases, we have to carry out further checks on the supporting documents, which can delay the process.

“Since the QR codes are sent by email, make sure you regularly check your spam folder.

“Make sure you include your correct email address in the application form, otherwise we cannot send you any document.

“A temporary QR code valid 72 hours can also be generated by a healthcare professional following a negative RT-PCR or antigen test taken.”

Going on holiday without a health pass

The Connexion has also spoken with a Canadian couple who had considered cancelling their holiday in Paris after delays in receiving their health pass QR codes but who eventually chose to make the trip anyway.

“We never received the pass sanitaire after applying through two separate processes,” Danny Foster told us.

“With some trepidation we finally decided to take a chance and go to Paris. [I’m] glad we did.

“There was no problem doing tours or accessing restaurants - our paper vaccine receipts without QR codes were accepted everywhere.

“In fact many places just glanced at the paper and welcomed us in.

“We are flying back to Canada tomorrow and thoroughly enjoyed our trip.”

How can I get a health pass if I don’t receive my QR code in time?

If you are unable to use vaccination certificates to create your French health pass in the TousAntiCovid app, you can take PCR or antigen tests instead, although this comes at a cost.

Antigen tests are cheaper and available from most pharmacies for approximately €25-€30.

Some pharmacies require you to book an appointment beforehand, but many take walk-ins, and will provide results within 30 minutes.

These results normally come in the form of an email or downloadable certificate with a QR code which can be uploaded to your TousAntiCovid app.

This will serve as a health pass for the next 72 hours, after which time you will need to repeat the process.