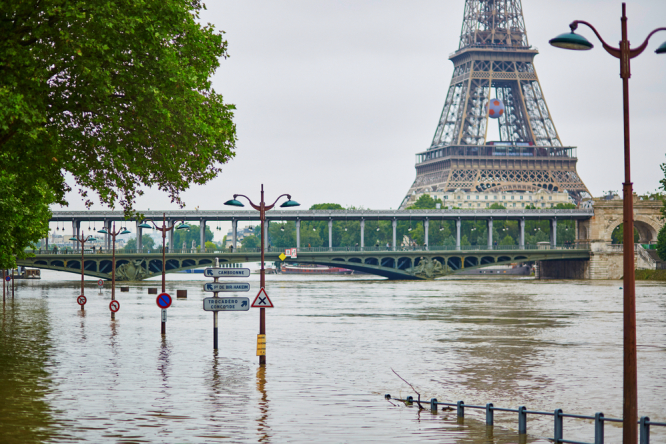 In 2016, the last significant flood in Paris, the river floodwater reached a high of 6.1m. This type of flooding could become more common in future if global temperature increases are not limited, climate scientists warn Pic: Ekaterina Pokrovsky / Shutterstock

An online interactive map shows how the world could be affected by climate change and rising sea levels in the coming centuries, with cities in France such as Calais, Dunkirk and Bordeaux impacted, as well as the French Riviera in the southeast.

The map has been created by Climate Central, a news organisation that analyses and reports on climate science. It is based on peer-reviewed scientific papers and uses large datasets to create the projections.

It features various options for assessing the impact of climate change, including being able to see how water levels will rise if global temperatures are kept to an increase of just 1.5C since pre-industrial levels, compared to an increase of 4C.

You can view the interactive map here. You can click 'choose map' to select a map calibrated by temperature levels so as to see the effects of a certain rise in temperature above pre-industrial levels by 2100, or 'warming choices' for outcomes hundreds of years from now if the temperature rise is at a certain level.

The 2015 Paris Agreement, a legally binding international treaty that France is a signatory of, has set the target of limiting global warming to 2C, and preferably 1.5C, above pre-industrial levels.

Further south, Anglet (Nouvelle-Aquitaine) would also be partially submerged, with the Cavaliers beach falling under water.

The Côte d'Azur would also be hard hit, with the city’s airport shown, surprisingly, as partly submerged in the long-term future, even at 1C (less than today, which is 1.1C) and almost entirely covered at 2C.

Other popular towns and cities in the area, such as Cannes and Antibes and the principality of Monaco will also be impacted by rising sea levels.

In the north, virtually all of Calais and Dunkirk will fall under the sea even with temperatures increasing by just 1.5C above pre-industrial levels, the maps show.

The timeframe for when these dramatic changes could take place remains vague, with Climate Central saying that “diverse research indicates that these sea levels could be realised between 200 and 2,000 years from now.”

He said that if the earth warms by just half a degree more, 200 million more people globally will be affected by floods, with Asia the most affected.

“The current concentration of CO2 is more than 50% greater than it was in 1800, and the average temperature of the Earth has increased by 1.1C.”

“This is enough to raise the sea level by almost two metres, whether it takes two centuries or ten centuries,” he said.

The Climate Central map also allows users to see how countries will be affected by looking at sea level changes. For example, an increase of two metres in sea levels would see large swatches of France’s west coast around La Rochelle underwater.

Mr Strauss’ new paper, published in the form of an accepted manuscript on October 11, comes just ahead of COP26, the United Nations’ climate change conference, which will be held in Glasgow (UK) between October 31 and November 12.