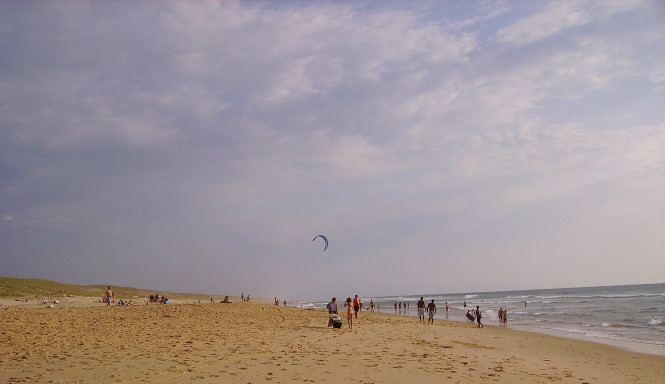 Yes, you can socially distance on French beaches

For those wishing to be by the sea with no people around, the answer remains, as it always has, to find a car-park near the long beach of the Côte Argent and to walk. Almost 200 km of golden sand stretches from the mouth of the Gironde estuary down to the mountains of the Basque country.

Even on the busiest days after a kilometre or two, the crowds of sunbathers thin out and you can set yourself down on the beach with at least 30 metres between you and anyone else.

Be careful about going into the water, though, especially at times when tide variations are high – at full moon and new moon.

The isolated spots are almost always a long way from the life-guarded sections of the beach.

Baïnes, gullies in the sand, carved out by the action of the surf, can cause powerful currents which can sweep the unwary along the beach and out further before easing, surprising even strong swimmers.

If you are caught in one, do not struggle to get back to shore. Instead, concentrate on staying afloat, not always easy in choppy surf, and sooner or later the current will lose its force and you can swim back to safety.

Another danger to be aware of are shore-breaks. Conditions sometimes arise where there is little surf far out and the waves break close to the beach.

These waves can be very strong, capable of knocking people down with enough force to drive them head-first into the sand.

It may be a bit late to find a camping ground close to the beach, though.

An example is the municipal camping ground at Carcans Océan.

The manager told Connexion that there are still places available for the next week, but after July 20 and to the 25th of August they are booked solid.

“We have many regular customers, from Germany in particular, and as soon as travel restrictions were lifted they all rushed to book,” he said. “They know and appreciate the space you can find on the beach.”

Sites a bit further away from the sea are likely still to have some space.

Get away from the crowds in France's stunning Massif Central

Away from the beach, the list of the departments in mainland France with the fewest number of people per km shows the Massif Central, the high plateau of the south-centre, and includes the Lozère, with just fewer than 15 people per km, the Creuse, 21 people per km and the Cantal, 25 people per km.

The office de tourisme of Mende, the préfecture city of Lozère, a city with a magnificent cathedral and a population of 11,000, has seen a lot of interest this year.

“As a department we were spared from Covid 19, and now the idea of taking your holiday in a place with not many people around has attractions,” said Cyril Duclot, the director of the office. “Our accommodation includes hotels, gites, and camping and there is still space in each sector.”

Lozère holds the record for being the least densely populated region in Europe: “As you can imagine the attraction for tourists is the countryside, with lots of hiking trails, cycling or river activities, as well as the attraction of small, quiet villages which live quietly pretty much as they have always lived,” said Mr Duclot.

Mende has a railway station which still has passenger trains, and there is a network of coaches in the department, including “tourist shuttles” between towns, villages and attractions in July and August, but most tourists still use cars.

“Robert Louis Stevenson wrote his famous book Travels with a Donkey in the Cévennes about a voyage in Lozère and following in his footsteps is something many British people like to do,” said Mr Duclot.

“You can walk for miles and seldom meet other people.”

A little further to the north the department of the Cantal is more mountainous and more densely populated with 25 people per km. By comparison the Dordogne has 45 people per km.

Many of the mountains are old volcanoes and the region is included in the Parc Naturel Régional des Volcans d’Auvergne.

Unlike the high mountains of the Alps and the Pyrenees, reaching the summit of many of the mountains can be done following hiking trails, without the need for specialist climbing equipment and skills.

Even during lockdown the Cantal saw the potential for attracting people this year and has published a pdf guide to tourism in the Parc Naturel Régional des Volcans d’Auvergne.