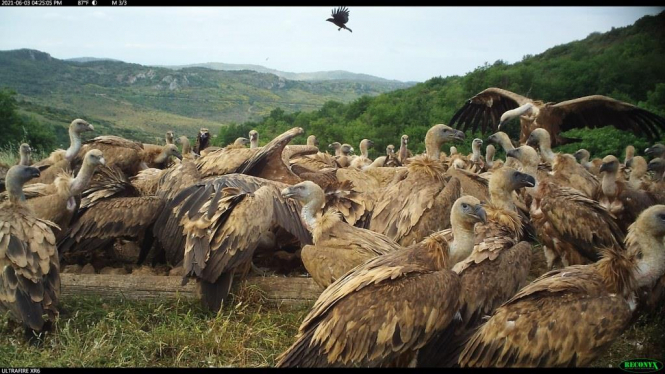 Reader question: I've just read the interesting article in your July edition, regarding vultures in France. I've been trying to track down where exactly the vulture feeding station is near Bugarach, Aude. Would it be possible to give me the details and advise the best days/times to visit. I've been wanting to visit for sometime. M.C.

There is a signpost marking the car park, and then a very short walk takes you up to the viewing platform where there is an exhibition and a public-use telescope.

The telescope allows good views of the cliff-face opposite, La Falconnière, and the feeding station situated below.

The public is not allowed on the track leading to the feeding station, for the very good reason that it would scare away any raptor that had come to feed, who are wild birds in no way tolerant of close approach.

This is not a zoo situation, but a feeding station maintained and conveniently placed in order to allow the general public a reasonable chance of getting views of these magnificent birds. There are about 20 other farmers’ feeding stations in the Aude, built with the help of the LPO and supplied with carcasses by the farmers themselves. These are on private land.

As to when to visit the observatory it should be known that generally carcasses are only put out when they become available from the local farmers after a natural death; this is more common in spring due to complications during lambing.

Food is no longer bought from local abattoirs specifically to feed the vultures now that they are considered to have reached a balanced number in proportion to livestock of the area, where the majority of the dead animals are sourced.

Yves Roullaud, a key figure in the vulture conservation of the Aude, will be present on the platform and will give explanations (in French) about what is happening in the skies around the site.

There is a strong chance there will be a feeding frenzy of vultures (known as a curée in French) during the day, but sometimes a good measure of patience is required.

However it is always worth a visit the observatory at other times, there are nearly always vultures roosting on the cliff, and they are unlikely to fly away before 10 o’clock.

Check the website of the LPO for other bird related events, including those at the observatory.

Diary of a birdwatcher in France: Vultures
Discover local bats this weekend as part of France’s annual Bat Night
‘No stings yet!’: Feedback from beekeeping beginners in France