Is there space in your French garden for hives in return for honey? 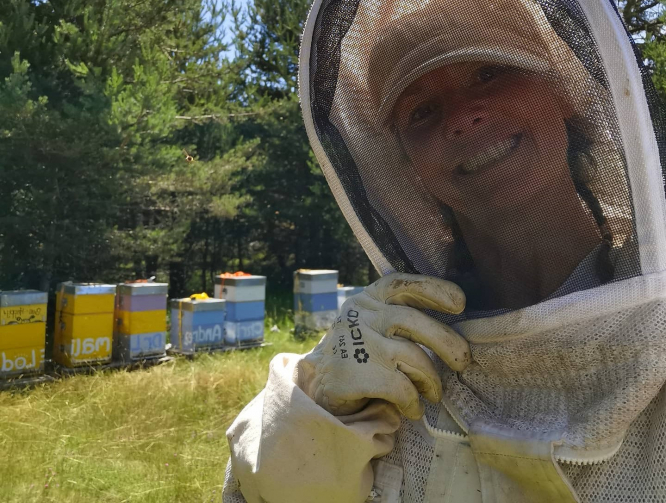 Do you have space at the bottom of your garden for a few beehives? If so, you could enjoy free honey in return.

Suzie Ravier from Valbonne, Alpes-Maritimes, who is Australian, has been keeping some of her hives in a volunteer’s garden for several years and told The Connexion she is keen to spread the word to those with some land going spare, to help other locals in her area looking for a place for their hives.

The practice is widespread in many areas of France, such as Ile-de-France, and offers of space and requests for help can also be posted and consulted at this site. Speaking to a local beekeeping school could also help identify beekeepers looking for help.

Ms Ravier works on a small scale for top-up income and says she is not looking for large spaces suitable for industrial honey production.

She said: “A couple of years ago I was looking for a new site and found someone in Grasse with space at the bottom of his garden that wasn’t being used for anything else.

“Several new beekeepers have contacted me recently saying ‘do you know anyone who would like bees in their garden?’, including one who is starting to train.

“So, people who enjoy helping nature and have a big garden and can take one to five hives from small-scale beekeepers, can get a couple of kilos of honey out of it.”

She added: “In the south of France there might only be one harvest per year, typically at the end of August in our area. Last year was a good one and I was able to do one at the end of spring, before I transfered my hives to the mountains for the summer.

“I have five hives in the garden and gave the garden owner ten 250g pots which he was keen to give to his guests that rent the house in the summer.”

Suitable land must be private and protected around 20m from homes, she said, but does not have to be in a very rural area.

“The place needs easy access, because you’re going to be moving hives in and out. I have a wheelbarrow I use, so you don’t want to have to negotiate difficult terrain.

“I send a text to say when I am visiting but you need free access to the property.

“In springtime, the busiest time, someone will be checking on their bees around once a week, then it depends if they are leaving them all year round or not.

“However looking after the hives is not something the garden owner needs to be responsible for, so it’s a good trade-off for them.”

Ms Ravier said in her area the harvest is most typically at the end of August and hives are prepared for winter hibernation at the end of October.

Most beekeepers now will now not be interested in installing hives until April next year, she said, but beekeepers are likely to want to get organised well beforehand and to visit the property.

Those interested, with gardens in the Alpes-Maritimes, can contact her at: suzie.ravier@gmail.com or on Facebook Messenger at suzie_ravier_apicultrice. It would help to know if people are happy to have French-speaking beekeepers or have a strong preference for an English-speaking one.

Beekeepers will have to declare their hives to the Agriculture Ministry and have civil responsibility insurance, but the garden owner is not responsible for any of this.

Mrs Ravier said she and her contacts are officially ‘amateur’ beekeepers, though they need to register with Siret numbers to sell their honey, as she does at the Chèvrerie de Valbonne farm. To be ‘professional’ you need at least 200 hives, she said.