Death of a family member in France: Steps to take in days after 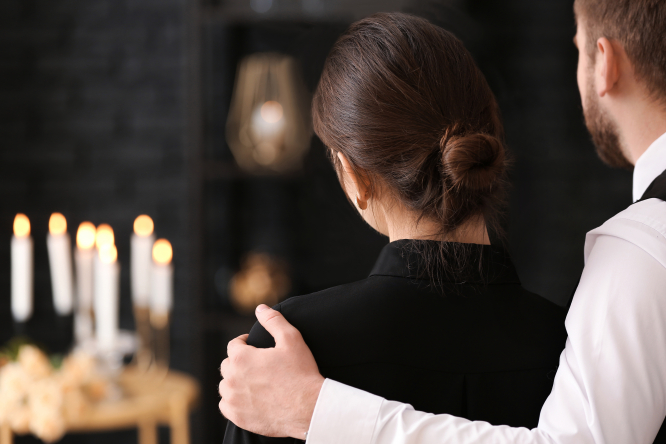 The death of a family member in France brings with it certain duties to be fulfilled Pic: Pixel-Shot / Shutterstock

The death of a partner or family member brings with it certain administrative procedures that need to be completed within a given time frame.

In the first 24 hours after it happens (excluding Sundays and public holidays), the death must be declared to the authorities. If the person died at home a doctor must be called on to issue a certificat de décès death certificate.

French law states only that this document – containing the person’s full name, date and time of death, cause of death, date and place of birth, profession and address – must be produced by a “doctor,” but does not specify that this doctor should have treated the individual in the past.

You can therefore call their GP practice, or alternatively the emergency medical services (Samu) on 15.

Deaths that are deemed to be suspicious, violent or that occurred in a public place must follow a different procedure.

Once the doctor has certified the death, you must declare it to the mairie either of the place of death or the place where your relative or partner lived. There you will be asked to present a document confirming both your identity and that of the deceased.

The mairie will then publish an official, publicly available acte de décès, containing all of the information detailed in the certificat de décès, save the cause of death.

It is best to request around 10 copies of this formal death certificate when you go to the mairie, as you will need to use it to shut down your relative’s various accounts.

If the death took place in a hospital or a care home, this establishment will take care of the certification process for you.

Looking after the person's body

If they died at home, a person’s body can stay there for a maximum of six working days with the permission of a doctor.

Alternatively, the body can be transferred to a hospital mortuary, where it can stay without charge for three days following the death. After this time the relatives will have to pay, although the tariff will depend on the hospital in question.

The family can also choose to have their relative moved to a funeral parlour between 24 and 48 hours after the death. They charge around €100 per day.

Gathering all the necessary papers

If relevant, check for any papers that contain details of a pre-reserved individual or family plot (titre de concession), or which reflect the wishes of your relative or partner in relation to cremation, burial, and the type of funeral service they wanted.

If the person did not express a preference, it is up to their spouse or partner, or failing that their children, to decide. In the case of a disagreement between family members, a judge from the place of death will rule on the matter.

Burying a person in a cemetery requires permission from the mairie, and will normally be granted if it concerns the town in which the person lived or died, or the location of their family tomb.

If your relative had not already reserved a burial plot you will have to buy one at the mairie or the bureau des cimetières.

Permission for cremation services must be obtained from the mairie of the commune where the death occurred, and the authorities must be presented with a medical certificate confirming that no pacemaker or similar device remains within the body.

The family will be given the deceased’s ashes after the cremation takes place, but will only be allowed to scatter them in certain places. For example, it is forbidden to scatter them, or let them land on public spaces such as parks or squares, and although you can spread them at sea, you should avoid rivers.

All French citizens are automatically registered for organ donation unless they opt out, but in the case of foreign nationals the medical authorities will defer to the system in their home country. Doctors will consult the family on the deceased’s wishes, and refusal will need to be given in writing, explaining that the person was opposed to the idea.

The person may have taken out funeral insurance, which could provide their family with a lump sum towards burial costs, or which could even have made arrangements for the ceremony in advance.

If you are not sure whether your relative took out funeral cover or not, the Association pour la gestion des informations sur le risque en assurance (Agira) search platform can help you to work out whether a policy exists or not, and should provide you with an answer within three days.

You can have your relative’s post forwarded to another address, whether in France or overseas. The packages available are detailed on the La Poste postal service website.

Once the death has been registered, the mairie will issue a burial permit (permis d’inhumer).

You can look for funeral directors on the Pompes funèbres de France website, or in the local mairie or hospital.

In order to determine which funeral firms offer the best service, you can ask for several quotes and decide between them. If any aspect of the quote is unclear, ask for more specific information.

The funeral should take place from 24 hours and six working days after their death.

In the context of the Covid pandemic, everyone over the age of 11 who attends a funeral should wear a mask and observe social distancing measures. Attendees do not need to present a health pass and congregation numbers are not limited.

Paying for the funeral

A French funeral typically cost between €3,000 and €4,000, although the price may be higher depending on the services offered.

If an individual did not have funeral insurance, it is up to their loved ones to pay for everything, although if they cannot afford it they are legally permitted to withdraw money from the deceased’s account.

In some cases, the funeral director will be able to bill the bank for their fees, and be paid straight from the deceased person’s account.

The Caisse nationale d’assurance vieillesse des salariés (Cnav) pension provider may also contribute up to €2,286.74 towards funeral costs of people who were French pensioners. To benefit, their relatives must present the funeral bill and the acte de décès.

Between 10 and 30 days after a person’s death, their loved ones should begin informing all the organisations with whom they had dealings.

This includes their bank, their pension provider or Pôle emploi if relevant, their health insurance and the tax authorities, as well as their electricity, gas, telephone and water suppliers.

It is best to send these organisations a letter sent recorded delivery, enclosing the acte de décès.

If the deceased lived alone in a rented, unfurnished flat or house, their death marks the end of their tenancy. Their loved ones should make sure that the property is cleaned and emptied out before it is handed back over to the landlord.

In the case of a furnished property, the tenancy is not automatically terminated, and so the person’s family should inform the landlord as quickly as possible to avoid continuing to pay rent.

Finally, it is necessary to cancel the person’s car insurance and carte grise vehicle registration record.

Paying any staff their dues

The death of a person marks the automatic termination of the employment of any staff members – including carers and cleaners – that they may have had.

Relatives are advised to send the employees a letter to this effect, and will be required to pay their final wages, their redundancy pay and any holiday pay.

In the days following a person’s death, their family should enlist the help of a notaire so as to identify the inheritance rights of the deceased’s family and settle the share-out of their estate.

In certain situations where relatively small sums are involved and there is no will or real estate, a person’s next of kin may prove their relationship to the deceased with a certificat d’hérédité, which in some parts of France can be requested from the mairie of the commune where the deceased lived.

Read more: What is a ‘certificate of heredity’ in France and how do I get one?

If there is no will, the order of inheritance follows a strict hierarchy. For example, if the deceased had no parents or living spouse but did have children, their entire estate will go to them. However, if the individual is survived by a spouse and by children, the inheritance will be divided among them all.

This system is explained in further detail on the Notaires de France website.

Even if a will exists, there are French inheritance rules surrounding the distribution of a person’s estate. Only if the deceased was neither married nor a parent may they freely leave their money and property to people of their choice.

If they had a spouse and/or children, they cannot disinherit them because of the réserve héréditaire forced heirship rules. If they had only one child, at least half of their estate must go to them. If they had two, it must be two thirds, and if they had three or more it must be three quarters.

The quotité disponible (remaining amount available after application of these rules) can be distributed to anyone, whether another family member, a friend or one of your children.

This month, a new French law came into place stating that forced heirship would apply even if a will specified the use of a foreign inheritance law. This means that if, for example, the British children of a French resident were disinherited they could seek compensation out of the person’s French estate.

Read more: Inheritance France: 'Law of nationality' wishes at risk in some wills

This goes against an EU succession regulation, in force since 2015, which allows those making wills to choose the legal system of another country whose nationality they hold for the distribution of their estate.

Franco-British honorary avocat Gérard Barron has said: “I believe the new article will not survive a challenge in the European Court of Justice,” but until it is formally disputed he said it may cause problems for some families.

Anyone who inherits money through a French will must make a déclaration de succession so that the tax authorities can determine if they need to pay inheritance tax.

The deceased’s spouse and children will not have to make a declaration or pay any inheritance tax if the actif brut de la succession (gross estate assets) was less than €50,000 and they did not receive any undeclared gifts or donations.

The déclaration can be completed on impots.gouv.fr, and must be filed within six months of the testator’s death if it took place in France.

Can French nationality be passed to an adopted child?

death
will
funeral
More from Family
More from Connexion

Missions Locales: Unemployed youngsters in France thrown a lifeline
2 December 2021
More from Family
More from Connexion
Get news, views and information from France
Join the newsletter
Subscribe to The Connexion