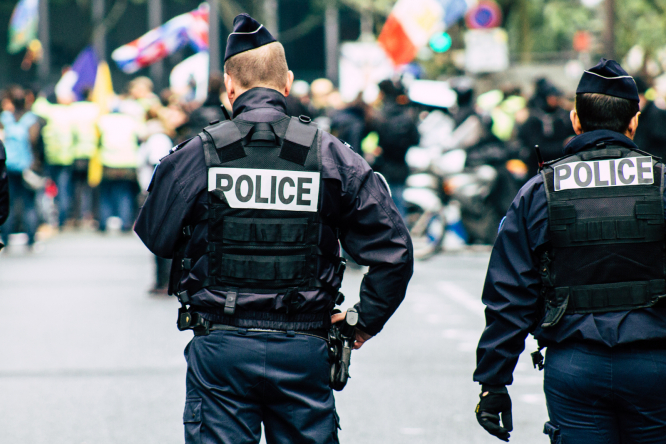 'It is almost as if he is hankering after the nickname Le Top Cop – one previously held by Nicolas Sarkozy' Pic: Jose HERNANDEZ Camera 51 / Shutterstock

Examine any of Emmanuel Macron’s actions and words over the coming months and all will lead towards one objective: re-election in 2022.

French presidents have only won a paltry single term in recent years, and he wants to buck the trend.

Still only 43, Macron believes he has the energy and intellect to continue his already incredible run of success by once again destroying the established parties, including the Gaullist conservatives and far-right Rassemblement National.

So how will he do it? By outflanking them with his enlightened thinking and reforming zeal? His inspiring commitment to reducing the poverty gap and living up to republican ideals of liberty, equality and fraternity?

It is almost as if he is hankering after the nickname Le Top Cop – one previously held by Nicolas Sarkozy, one of the most reactionary interior ministers and then presidents in recent history.

Macron has become increasingly close to Sarkozy in recent months. He certainly sounded just like him in mid-September when, during a keynote speech at the National Police School in Roubaix, in northern France, Macron said he wanted to double the number of police and gendarmes within a decade. This means 10,000 additional officers coming up within months, and the creation of some 50,000 reservists soon afterwards.

There was the usual sop to moderates in Macron’s speech too – he said he would clamp down on racism and police brutality – but the overwhelming message was that the French feel less secure and need protecting.

Social media and 24/7 TV news have certainly helped give the impression that terrorism, gang fights, muggings and other violent crimes are more widespread than ever, even though statistically this is not so. The murder rate in France is currently around 1.2 per 100,000 inhabitants – about the same as Britain’s, and around a quarter of America’s.

This does not stop Macron demonising the detested class of French citizens that Sarkozy called racaille – a word that loosely translates as ‘scum’, and which generally refers to ethnic minority young men who come from council estates. ‘Savages’ is another popular term of reference for these types among the increasingly right-wing political establishment.

Added to these ‘enemies within’ are those who take to the streets most Saturdays in mass protests against the Macron administration. Whether gilets jaunes or anti-vaxxers, or those embracing scores of causes in between, they are already confronted by legions of officers wearing armour and brandishing weapons.

Rioting inevitably breaks out, as the dramatic optics point to a divided nation which is in no way at peace with itself.

Little thought is given to the root causes of so much of this dissent. Paramilitary policing in the form of units such as the CRS (Republican Security Corps) has been the go-to tactic of all presidents since World War Two. White knight heads of state pretend it is all very necessary because the people need protecting, not least from themselves.

'Sending in legions of officers at the first sign of any trouble not only impresses a generally socially conservative population, but wins elections'

It is a grim and deeply cynical approach to governance, but one that has become institutionalised in France. Sending in legions of officers at the first sign of any trouble, and keeping thousands of others in reserve for times of real crisis, not only impresses a generally socially conservative population, but wins elections.

That Sarkozy is now a convicted criminal who is appealing a custodial sentence for corruption while awaiting further trials will not matter to President Macron.

Maintaining power is all that concerns him, and if that involves learning tricks from a disgraced Top Cop then he will have no qualms at all.

Update: Voting rights in UK and French elections for Britons in France