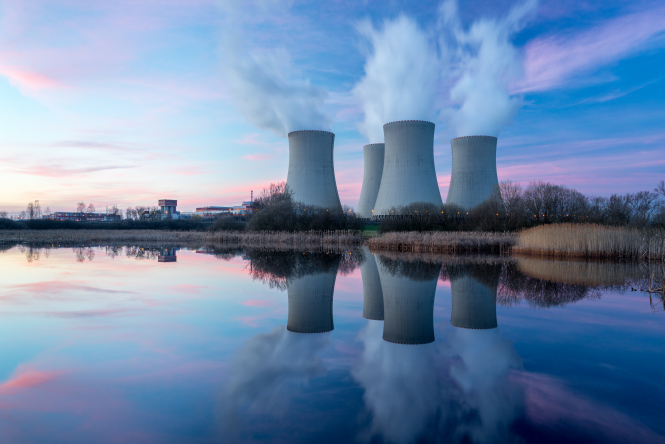 Six months ahead of the French Presidential elections, and with energy prices rising steeply this month, the future of nuclear energy in France is becoming a key issue.

President Emmanuel Macron has previously spoken out in favour of using nuclear energy, saying during a 2019 European summit that use of nuclear power would help France transition towards carbon neutral energy sources.

In mid-October the president is expected to announce the creation of small-scale nuclear plants, or SMRs, which are said to be affordable, safer and to produce emission-free, carbon-free energy.

According to EDF, nuclear energy is the primary source of electricity production in France.

There are 56 nuclear reactors of varying sizes located throughout France, with those in l'Auvergne-Rhône-Alpes, Grand Est, Centre val-de-Loire and Normandie providing 80% of electricity produced by nuclear power.

Candidates on the right for increasing nuclear production

Candidates on the right have so far said they support expanding use of nuclear energy in France.

Xavier Bertrand, current regional president of Hauts-de-France, told FranceInfo on October 4 he was in favour “of laws bringing nuclear energy back to producing 50% of energy” in order for France to remain an “independent” energy producer.

“We will have greater and greater need for electricity and [people] want to reduce use of nuclear energy, are they crazy or what?” he said.

Mr Bertrand added that development of wind farms in France has been “anarchic” and was “massacring the countryside”.

Eric Zemmour, despite not officially being a candidate yet, also criticised wind farms during a televised debate with Jean-Luc Mélenchon, president of La France Insoumise party (far-left) on BFMTV.

He said: “They are catastrophic for people’s health and the beauty of the countryside. Abandoning nuclear energy means abandoning our national autonomy and 200,000 jobs.”

Taking a slightly different tone, regional president of Ile-de-France and member of Soyons Libres (centre-right) Valérie Pécresse called for a “new approach to nuclear energy”, including the creation of six new nuclear reactors.

This was echoed by Michel Barnier of Les Républicains (centre-right), who told BFMTV that, as president he would “reinvest in and relaunch construction” of nuclear reactors in France.

Diverse opinions from candidates on the left

In contrast, some candidates on the left have spoken out strongly against continued use of nuclear energy.

EELV (centre-left, green) candidates Yannick Jadot and Sandrine Rousseau have both said that they wish to see an end to the use of nuclear energy.

Paris Mayor and Parti Socialiste (centre-left) candidate Anne Hidalgo agrees. In her recently-released book she wrote: “we need to stop using nuclear energy as soon as the development of renewable energy allows it.”

However, Olivier Faure, also from the Parti Socialiste, told FranceInfo he “did not believe” in ending use of nuclear power in France by 2030, because “as long as we have not fully developed renewable energies, we have to continue using nuclear plants”.

As in previous presidential campaigns in 2012 and 2017, Mr Mélenchon has said that use of nuclear energy should be stopped before 2023, in favour of 100% renewable energies.

He has previously campaigned for abandoning nuclear plants, the burial of nuclear waste and the closure of France’s oldest nuclear power station Fessenheim, which happened in June 2020.

Parti Communiste (far left) candidate, Fabien Roussel, spoke out against the closure of the power station at the time.

In an interview with Le Point in May 2021 he said he was “in favour of maintaining use of nuclear power in France”.