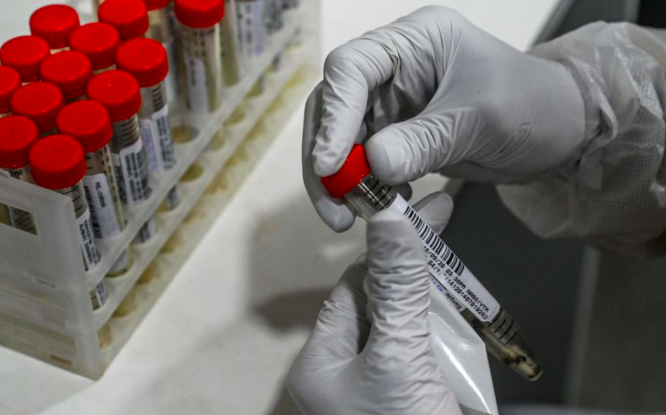 More than 300 mutations of the South African and Brazilian variants have been identified in Grand Est in the last four days, figures show
By Hannah Thompson

The “worrying” spread of the Brazilian and South African Covid-19 variants in eastern France has led MPs and health experts to call for a new lockdown, as Health Minister Olivier Véran visits the area today.

The department of Moselle in Grand Est has a “higher than average” incidence of the new variants, Mr Véran said at a press conference yesterday.

He said: “We have identified more than 300 mutations of the South African and Brazilian variants in the last four days in the department of Moselle [and] there were already 200 more extra cases in the days before that.”

These variants are being closely scrutinised as they are thought to be more contagious than the previous variant. They also “risk being less sensitive to some available vaccines” and may “escape the antibodies made” by people who have had the vaccine and/or Covid already, he said.

The minister is set to visit Metz today to meet with local authorities and health bodies to “anticipate the responses that we must find together”.

The latest figures from Santé publique France (SPF) show that the Grand Est region is one of the most-affected by Covid overall, with an average of 430 new cases recorded daily for the first week of February.

The number of cases confirmed per 100,000 inhabitants has been rising since January, and is now at 290.7 compared to the nationwide average of 201.2.

Local authorities have called for a speeding up of the vaccination campaign in the region and are considering whether to close schools, collèges and lycées imminently.

The mayor of Metz, François Grosdidier, has called for a new lockdown.

He told news service BFMTV: “When we reach an alert threshold, we need a real lockdown, which is limited in space and time, but that would be a real brake [on the spread]. I also think that we should close the schools.”

He also criticised the government’s decision not to impose a new lockdown.

He said: “I think that the extended curfew decision was not right and that we should have had strong lockdowns.”

Patrick Weiten, president of the Moselle department, has called for the region’s vaccination campaign to be “dynamised”. Mayor of Thionville, Dr Pierre Cuny, led calls for school holidays to be brought forward by one week and for schools to be closed completely, saying that the measure was being closely considered.

He said: “It is clear that today it is urgent to strengthen and impose more measures that will allow us to really block the spread of this virus.”

Why are Covid, and the variants, spreading more in Moselle and Grand Est?

Mr Véran has said that the high numbers of cases in the area are due to the increased presence of the Brazilian and South African variants, as these are more contagious.

Not all the cases can be linked directly to particular clusters, or to people who have travelled, the minister said, suggesting that the variants may now be spreading at an increased rate among the population in the area.

Dr François Braun, head of emergency services Urgences and Samu at the CHR Metz-Thionville centre, said: “There is no clear explanation, but only ideas. The proximity [of the region] to Luxembourg and Germany could be a reason.”

Dr Cuny added: “40% of new cases here are variants, and that is something completely new, something exponential, which has happened in just a few days, and which requires strong measures.”

In contrast, the presence of these variants across the rest of France remains low, at just 4-5%, Mr Véran said.

This is compared to the UK variant, he said, which is responsible for “20-25% of infections [nationwide] today”. This still represents a rise of the UK variant, which accounted for 3.3% of new cases at the beginning of January and at 14% by the end of the month.

Mr Véran said that the UK variant is spreading quickly in France and that the “proportion of positive cases [of it] are rising by 50% each week”.

Yet, he reminded the public that the currently-available vaccines are “very effective” against the UK variant.

He also said that overall, the Covid-19 situation in France was “stable”, with around 20,000 new cases per day on average.

He said: “Pressure remains high but is not rising. The next few weeks will tell us if the current measures are enough, or if we must resign ourselves to confinement measures.

“We are making no bets about the future, but we can see that we have already made up time, and we hope to avoid [lockdown].”

Figures show that the number of hospitalisations in France is stable too, at around 1,500 per day. The total number of patients in intensive care is stable at between 3,000-3,200.

SPF has said that this level is still “very high”, and “worrying” as it is causing “tension in the [health] system over several weeks”, and that it is possible that the situation could “worsen in the next few weeks”.

Professor Mircea Sofonea, infectious diseases and epidemiology expert at the University of Montpellier, told newspaper Le Monde: “For the moment, the spread seems stable, and there is no reason to believe that it will spontaneously change within the next two weeks.”

But Professor Mahmoud Zureik, epidemiologist and public health expert at the university of Versailles Saint-Quentin-en-Yvelines said: “With the variants, we have a sword of Damocles hanging over our heads.

“When the level of contamination is high, it can change very quickly, and when it goes over 20,000 new cases per day, it’s uncontrolled.

“We will not be able to get back to normal life without a brutal brake on the spread of the virus, which includes a new lockdown, probably the last one. Without this, we will not stop with this permanent back-and-forth.”