French police crackdown on crowds at beaches and parks 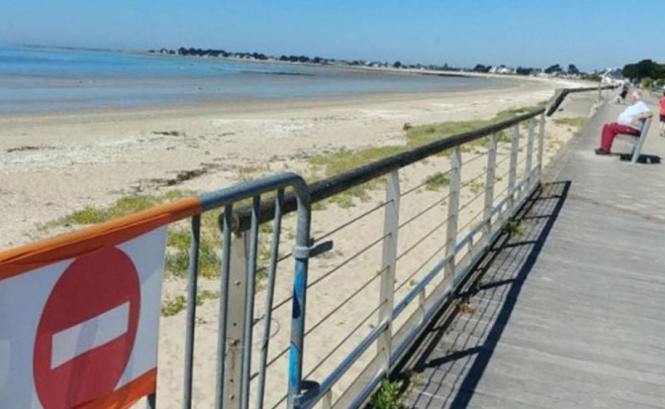 Several beaches on the Breton coast in Morbihan have been closed again this week after they were reopened last weekend in line with new deconfinement rules.

Local mayors ordered the beaches to close again after hearing reports of “unacceptable behaviour” and people failing to respect physical distancing rules (staying at least 1-2 metres away from other people not in your household).

In a statement, the Morbihan authorities said: “This decision is the result of unacceptable behaviour over the last weekend (ignored social distancing, non-compliance of municipal by-laws, damage to facilities, non-compliance to environmental standards).”

However, the department has also reopened 25 beaches across four other communes, Baden, Ile-aux-moines, Locmariaquer and Larmor Plage.

But the statement warned: “As we have seen, even though the beaches are open, they can be closed again. There will be an increase in checks by law enforcement over the weekend of Ascension.”

The mayor said that police will now be authorised to go “from educating people to handing out fines” of €135 per infraction from today (Thursday May 21) onwards, as a small number of people were not respecting the “dynamic nature” of the beaches.

In a statement yesterday (May 20), the department said: “Good weather conditions meant that there were very many people on the beaches in Finistère, mostly within the rules set by mayors, but with the exception of some cases, in which user behaviour did not conform to the standards expected.”

The beach closures come after police dispersed crowds in Paris this week, after hundreds of residents took advantage of the good weather to sit on the grass in front of Les Invalides.

Most were in small groups and appeared to be trying to remain physically distanced, but the sheer number of people eventually made this impossible, prompting police to ask the public to “evacuate”.

It was fun while it lasted. Paris police politely disperse the crowd; crowd politely complies. But there’s no way a return to lockdown mode is going to work pic.twitter.com/7ngI9J8BsY

The incident prompted one MP to question the government’s deconfinement strategy.

Éric Diard, MP for the Bouches-du-Rhône, tweeted a photo of the busy space, and asked: “Is opening cafés and restaurants more dangerous than thousands of people spilling out over the laws of the Invalides?”

The government is set to make a decision at the end of May on whether - and when - to reopen cafés and restaurants.

Too many people: Football match and funeral

Similarly, police are investigating after a crowd of 150 people showed up to a football game in Amiens (Somme) at the Soufflot stadium on Saturday night last week.

Police said that they had evacuated people from the stadium, and one person - a man, suspected of having helped to organise the event - had been questioned.

An inquiry has now been opened into “endangering the lives of others” and “non-respect of confinement measures”.

In a statement, the Somme prefecture said: “[This type of event] is incompatible with health measures currently in force that are aiming to reduce the spread of the virus.

“The national deconfinement strategy requires us to adapt when it comes to sports. Only individual sports practiced outside are authorised at this stage of the epidemic.”

Authorities this week have also highlighted the example of a funeral in Compiègne (Oise, Hauts-de-France), which saw 600 people attend with very little warning.

The prefecture said: “This was a spontaneous gathering, decided at very short notice via social media, without prior consultation with local authorities. The size of this gathering had obviously not been authorised, given the health risk that it presented.”